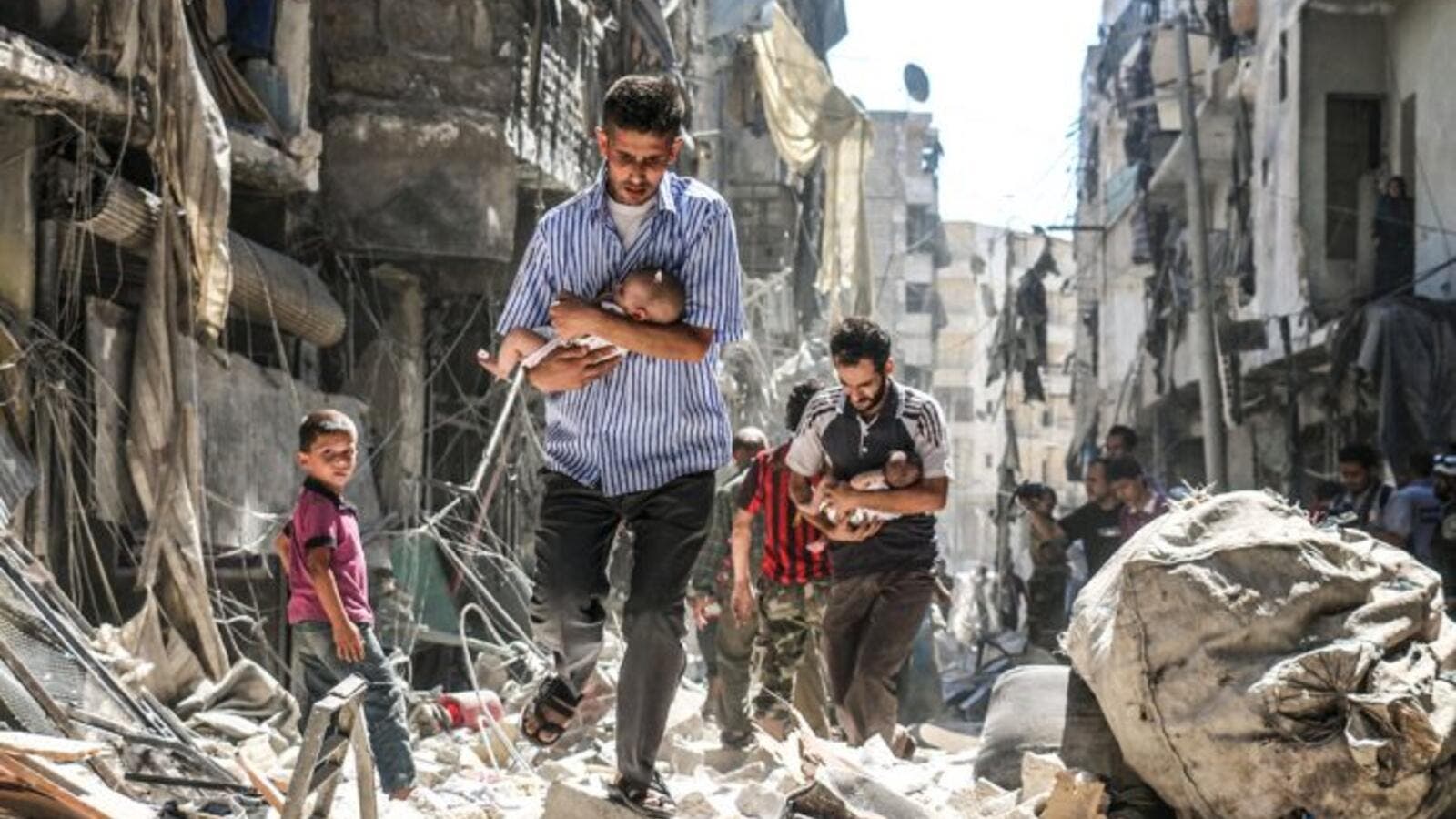 The Syrian Civil War is coming to a slow end after six years of ongoing fighting. The country is no longer what it used to be with the Assad regime supported by its stronger and more adept allies Russia and Iran set to reassert control over most of Syria.

While there is certainly no clear winner in the conflict, it is important to acknowledge who will shape the framework of post-conflict reconstruction in Syria.

Certain things are clear: Iranian and Russian military involvement on the side of regime forces will clearly translate in expensive contracts for Iranian and Russian firms. In fact, in early September, Iran and Syria signed an agreement guaranteeing the former party rights to rebuild Syria’s power grid.

The memorandum of understanding signed between the two nations included, “building a power plant in the coastal province of Latakia with a capacity of 540 megawatts.”

While Russia and Iran are certainly likely to reap considerable economic benefits, another more unlikely actor is also set to benefit from Syria’s post-war reconstruction--a period most experts estimate will span at least a decade. Although a gulf state, and one too in the vicinity of Saudi Arabia which sought to dictate the Arab position on Syria, Oman has embraced a decisively ambivalent position to each actor in the Syrian conflict since the beginning of the war, and has thus positioned itself to benefit from Syria’s post-war reconstruction.

Early in 2011, Gulf powers sought to suspend Syria’s membership in the league and impose a heavy sanctions regime on Damascus in order to cripple its economy, and by extension, isolate Damascus internationally. The thinking was twofold: increase international pressure on the Assad regime and install a regime friendly to Saudi Arabia. By doing so, gulf powers also sought to cut Iran’s link to the levant which had historically been facilitated by the Assad regime; the importance of this objective could not have been overstated in the thinking of major Gulf powers.

Despite early efforts by gulf powers to isolate Syria, many Arab regimes hesitated to fall in line. The Iraqi invasion of 2003 and the more recent NATO-led intervention in Libya led countries like Iraq, Lebanon, and Algeria to resist both Saudi and Qatar’s vision for Syria. Oman was also one of those states. Syria expected Oman to oppose the vote to suspend its membership in the League of Arab States. Oman did not oppose the motion, however, the gulf kingdom did refuse to cut diplomatic ties with Damascus, a major blow to both Qatar and Saudi Arabia actively seeking at the time to unite the GCC and the Arab world behind its strong anti-regime stance.

In 2012, Oman berated both the regime and the Syrian National Council for continuing ongoing fighting that was dividing the country and destroying the country’s institutions. Perhaps most telling about Omani Foreign Minister Yusuf bin Alawi’s statement was his official declaration that Oman’s role in the conflict would strictly be constrained to humanitarian assistance as opposed to arming rebel groups, revealing Oman’s historical opportunistic approach to regional conflicts; Oman was not ready to write off relations with Damascus in the case that the regime remained.

While the refusal to arm rebel groups may seem practical in hindsight, Oman’s willingness to separate from GCC consensus at the time also represents heightened geopolitical autonomy that it has successfully been able to carve for itself since the early 2000s, in part because of its purported role as a neutral player in the region.

In August of 2015, Syrian Foreign Minister Walid Moallem met his Omani counterpart in Oman’s Muscat. While this marked the first occasion that any Syrian official travelled to a GCC state for an official visit, it is important to note that the visit came at Oman’s invitation. In October of that same year, Foreign Minister Alawi would travel to Syria for similar talks with Damascus, but this time with President Assad himself. While Syria at the time was interested in “negotiating an end to its 4½-year-old civil war,” Oman was looking to flex its own geopolitical muscle.

All indications suggest that Oman’s Syria gambit has translated into economic dividends. In fact, in August of this year, Syrian Prime Minster Imad Khamis told a visiting Omani delegation, that the “priority of investments in Syria will be given to the businessmen from the friendly and brotherly countries which stood by Syria in its war against terrorism.”

In November of this year, Syria and Oman signed a Memorandum of Understanding (MoU) “for cooperation in the energy sphere,” making the Syrian-Omani company a “springboard towards establishing other investment projects between the two countries.” According to Syria’s state run news agency SANA, the cooperation between the two countries seeks to aid in the “rehabilitation and reconstruction of damaged oil facilities.”

On November 30, The Syrian Law Journal, an online publication covering Syria’s economic and legal spheres reported that Prime Minister Khamis had again “welcomed Omani investors in Damascus and their planned participation in the oil, mineral resources and tourism sectors,” indicating Damascus’s willingness to make Oman a key partner in its future development.

According to D.C-based security analyst John Arterbury, Oman’s partnership with Syria is rooted not in mutual trust or shared ideological visions, but rather in prospects of economic gain. “Syria has limited oil and gas potential. In prewar Syria, it [oil] was a small part of its economy, and the war itself has been so devastating that it will take years to recover what amounts to a small portion of its economy,” Arterbury tells [insert publication name].

Helping Syria with its oil and gas, Arterbury argues, is a “low-cost, medium-reward gambit for a state like Oman.’”

Oman’s partnership with Syria, however, is more than just about Syria. The Sultanate’s view of its relationship with Damascus is intimately related to its wider diplomatic portfolio. Oman has historically championed neutrality in the region, avoiding at times rhetorical support for a particular side and almost always steering away from active diplomatic support for actors involved regional conflicts. According to Arterbury, “this makes having cordial relations with Oman attractive to other states.”

Oman’s neutrality and its perception in the region as an indifferent actor allows conflicting states access to a discreet back channel, much like 2013 when Oman facilitated secret talks between the United States and Iran regarding Iran’s nuclear program. Oman’s partnership with Syria, perhaps more importantly, also allows states like Saudi Arabia and Qatar--actors in staunch opposition to the Assad regime since 2011--the ability to discreetly explore investment opportunities in Syria through Oman as a third party.

Warm relations with both the GCC and Iran have also yielded considerable economic benefits. As Oman emerges as a diplomatic force within of itself, both Iran and the United States, in an effort to lure Oman away from the other, have initiated defense and economic agreements with the Gulf country. Former Secretary of State John Kerry, in a visit to Muscat,  “discussed the sale of a $2.1 billion missile system (THAAD) intended to link the GCC states’ defense systems, in an effort to contain Iran.” Similarly, just across the Persian Gulf, Tehran has sought multiple natural gas agreements with Muscat. A similar Omani policy of cautious non-alignment is at play in Syria.

According to Arterbury, however, “neutrality can be a difficult position to maintain indefinitely, especially in a region as volatile and rapidly changing as the modern Arabian peninsula, so Oman must be careful in how it balances its relations.”

While both Saudi Arabia and Qatar seem to have acknowledged that the Assad regime is here to stay, the extreme instability which still dominates Syria could potentially backfire on Oman. The possibility of that, however, remains low and Oman understands this. Regime change is indefinitely off the table, additional Western sanctions are unlikely to be imposed anytime soon, and domestic criticism at home in reaction to a stronger alliance with Damascus is of little concern to Sultan Qaboos. In addition, UAE’s standoff with Oman could ensue into a larger diplomatic dispute between Gulf states and Oman. Recent rifts, however, between Qatar and the GCC and the fractures to Gulf unity that have ensued also makes that an unlikely possibility.

Today it is widely acknowledged that Syria’s post-war economy is wildy unstable and rife with complications. For a range of actors, this environment offers exciting prospects for growth. Oman is certainly one of those actors and at least in the short-term, Oman seems intent on wanting a stake in Syria’s future.

Aman Madan is a former fellow at the Pulitzer Center for Crisis Reporting, and a former research intern at the Issam Fares Institute for Public Policy and International Affairs.

The opinions expressed in this article do not necessarily reflect those of Al Bawaba. This article has been adapted from its original source.