Israel Doubles Down on its Military After Facing Newfound Isolation

Israel’s military actions in Syria received widespread attention after one of its jets was shot down over Syria. And while news surrounding Israel, from Trump’s decision to recognize Jerusalem to its military intervention in Syria, show an ostensibly empowered and decisive Israel, the reality may be anything but.

Continuously on the defensive, Israel is losing international support and growing more isolated. As a result, its policies, both domestic and regional, have become more militaristic and markedly less democratic. When pushed against a wall, Israel appears to be relying less on the logic of consensus democracy and more on strongman

Israel has been deepening its involvement in Syria (AFP/FILE)

Since the beginning of the Syrian Civil War, Israel has conducted over 100 air raids and strikes in Syria. In addition, the Israeli government has conducted outreach to Sunni and Druze communities near its border with Syria in an effort to create an indirect base of operations within the country.

Their most recent raids, by far the most direct intervention in Syria, involved hitting both Iranian and Syrian air bases and missile defense, as retaliation for Syria shooting down its jet. At face value, these actions reflect an unafraid nation willing to take decisive action to defend itself.

But these so-called ‘decisive’ actions put Israeli assets directly at risk, and almost certainly come as a last resort, with Israel unable to influence forces on the ground to push its agenda while also being unable to pressure major international players to combat growing Iranian influence in Syria more forcefully.

In other words, such military actions could be coming from a place of weakness rather than strength, a reflection of Israel’s emerging isolation in the Middle East now that its major partner, the U.S., appears to be withdrawing from the region both military and diplomatically.

For the U.S., it is becoming less relevant in both determining the future of the Middle East’s landscape and controlling the policy decisions of individual countries. When Iraqi Kurds pushed for total independence from Baghdad, Iraqi Prime Minister Abadi called on Iran to settle the dispute, not the United States. Abadi then defended the presence of Iran-backed militias in the country against criticism from the U.S. that they violated the sovereignty of Iraq.

In Syria, the U.S. has been slowly winding down its support programs for opposition forces, and is allowing Turkey to decimate Kurdish militias the U.S. supports as vital allies against ISIS. Meanwhile, Iranian militias have proven to be vital allis for Assad and look to stay in the country for the long haul.

All of this is to say that, with less U.S. influence and more Iranian power, the Middle East will likely become more hostile to Israel, requiring it to continue relying on a ‘security first, diplomacy last’ strategy it is currently employing. 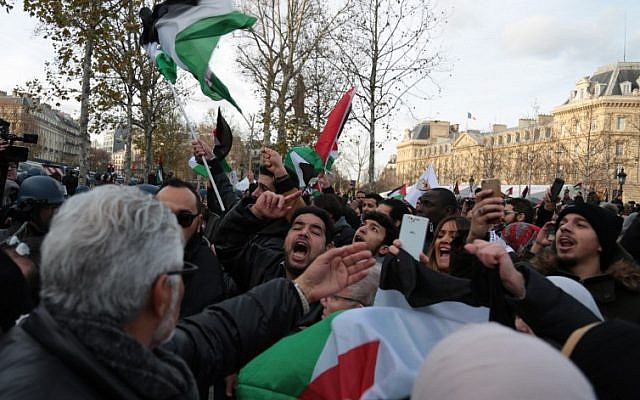 The last major myth that Israel is becoming more empowered came from Trump’s decision to recognize Jerusalem as the capital of Israel.

While it affirmed U.S. support for Israel and its Prime Minister Benjamin Netanyahu, it also alienated Israel from most European countries. It was a moment that pitted Israeli interests against the rights of Palestinians, and the EU and U.N. came out forcefully in favor of Palestine.

The U.N. General Assembly convened on the U.S.’ capital recognition, and overwhelmingly voted to condemn it as an irresponsible act that endangers the prospects of peace.

Even the U.S. Vice President Mike Pence was forced to tour the Middle East to try and calm Arab allies, who are strategic partners in the fight against extremism. It didn’t work.

When Trump slashed the U.S.’ contribution to the U.N. agency charged with aiding and schooling Palestinian refugees, again he met the ire of Europe and the Middle East. Switzerland, Finland, Denmark, Sweden, Norway, Germany and Russia sent their planned donations  to UNRWA early to help mitigate its desperate shortage of funds, while three other European countries Belgium, the Netherlands and Ireland have pledged to do the same soon.

Israel’s global standing has quickly diminished and only promises to continue.

What This Means for the People

A Syrian man sits among rubble in Douma (AFP/FILE)

This has an underlying danger for the region: first as it learns to rely only on itself for help, it may rely on its military to ensure its safety. In so doing, conflicts involving Israeli forces could escalate and drag on longer, risking countless lives.

That already seems to be happening.

Though it has maintained a series of secret talks with Saudi Arabia, its military has become more involved in Syria over the past two years, and it is currently expanding its indirect presence past the contentious Golan Heights and into southern Syria, as far as Deraa.

The planned expansion would create, in the long term, and Israeli foothold in Syria to combat Iranian forces seeking to get close to the Israeli border.

This threatens to draw the Syrian people into a protracted proxy conflict between two historical adversaries, risking their lives in a geopolitical game that, so far, does not look to have an end in sight.