Published February 14th, 2018 - 03:28 GMT
Resettling people who are looking for someone to blame back in Raqqa and Mosul threatens to violently renew social divisions. More must be done to reconcile Iraq and Syria's social divisions (AFP/FILE)

A global initiative to raise funds for reconstruction efforts in Iraq began Feb. 12. Iraq claims it needs $88 billion to rebuild what was lost in the war against ISIS, but some experts put the total closer to $100 billion just for individual cities.

As countries tout the importance of such an effort but offer tiny fractions of that in grants and credit lines, one resident of Mosul who lived through the terror of ISIS asked; what’s the point?

ISIS is on its last legs, after having been ousted from its last strongholds in Iraq and Syria, and now that reconstruction has begun in earnest, signs of its shortcoming are already apparent.

Apart from there simply not being enough resources to clear cities of mines and rubble, there is no apparent vision for the rebuilding of social fabric that has been torn for decades and only suffered more under the brutal sectarianism of ISIS. This leaves the people most affected by the war to both literally pick up the pieces of their own homes, and to try and devise ad hoc strategies to reconcile the social divisions that now threaten to undermine any effort to rebuild.

ISIS stormed onto the global scene in 2014 when it captured Raqqa in Syria, then Mosul in Iraq, declaring its territory to be a Caliphate, an Islamic State. For three years, it ruled both major cities with a hard-lined Islamist vision that included genocide, ethnic cleansing, and torture as methods of control.

Even after ISIS’ defeat, Raqqa and Mosul are forever scarred. Every expert, resident, and International Non-Governmental Organization [INGO] worker Al Bawaba asked about international efforts to rebuilding say the same thing: not enough is being done. 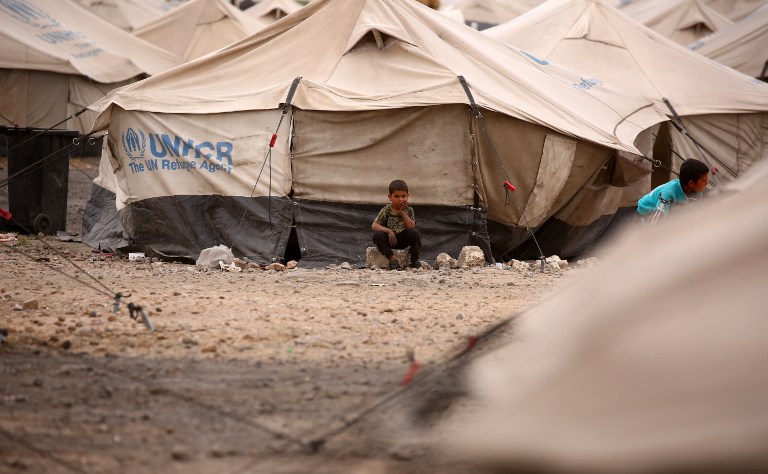 A child sits by a tent in a refugee camp outside Raqqa, Syria (AFP/FILE)

ISIS was driven from Raqqa, its de facto capital, in Oct. 2017. Four months later, the city is still a ghost town. Residents are not allowed to return to the city proper, as efforts are underway to clear it completely of mines and explosive remnants left behind.

“I don’t think you can talk yet about reconstruction,” said Nadim Houry, the director of Human Rights Watch’s terrorism and counterterrorism program, who regularly visits Raqqa.

Raqqa is just a “rubble field.”

After an intense bombing campaign and protracted siege by the international coalition in conjunction with the Kurdish-led Syrian Democratic Forces (SDF), much of Raqqa has been totally obliterated.

But even in basic attempts to de-mine Raqqa, to say nothing of rebuilding its infrastructure and society, is faltering under a lack of international urgency.

“We’ve gone through a five-star military effort...where means is not a problem [to liberate Raqqa], to being unable to overcome “bureaucratic obstacles:” the attempts from the international coalition to repair Raqqa does nothing to “match the scale of the problem,” argued Houry.

A recently released report by Human Rights Watch documented almost 500 injuries from mines left over from ISIS, with 157 children injured and many dead.

When asked if the world is doing enough to rebuild after ISIS, Pamela Abbott, a professor at the University of Aberdeen and director of the Center for Global Development, was unequivocal: “No the international community is clearly not doing sufficient [work]. They caused much of the damage. The cost of reconstruction realty exceeds any resources the Iraqi or Syrian governments have even if they eliminated all corruption.”

“There is a risk that the international coalition against ISIS wants to rush to a mission accomplished moment without addressing the many consequences of ISIS and the fight against ISIS,” responded Houry, saying that there are still issues of justice and disappearances under ISIS that have not yet been dealt with.

The international coalition has trained workers on de-mining and helped with some of the rubble clearing efforts, but has offered little else beyond that. Residents, unable to move back into Raqqa or retrieve loved ones’ bodies still stuck under debris, are stuck waiting indefinitely in camps. Those that wish to de-mine their homes have done so at their own peril.

Omar Mohammed, a former resident of Mosul, who became famous after starting the anonymous blog, Mosul Eye, to document everyday life under ISIS, spoke of the hopes for their city after ISIS, that have since become diminished:

Mosul was liberated from ISIS in July, 2017—just over seven months ago. Like Raqqa, most of the city was destroyed and rebuilding efforts so far have either been unequally distributed and woefully myopic as social tensions remain at an all-time high.

Mohammed, who was raised in Mosul and stayed inside it as a citizen journalist detailing the accounts of ISIS’ brutality in his city, is despairing about the state of his home town.

“The city is silent now, because the people are still shocked. They are living in trauma and shock. But once they get settled, it will become more difficult.” Once the displaced people come back to their cities “they will remember those who committed crimes against them…”

In other words, if and when the infrastructure of Mosul is rebuilt, Mohammed fears tensions will just reach another boiling point: “Yazidis, Christians, and Shia will say that Sunnis are responsible. Sunnis will say Shia are responsible.”

A man outside Mosul holds a white flag (AFP/FILE)

At camps around Mosul, tensions have occasionally erupted in violence, according to Kevin DeJesus, professor at Johnson and Wales University: “In IDP [Internally Displaced Person] camps, youth of one religious sect will throw stones at members of another.” Because of this, DeJesus declares that “the social fabric of Iraq must be re-imagined by its citizens and responsive political leaders.”

As opposed to Raqqa, which is run by a relatively effective civil council, there is no central authority in Mosul determining its social and political cohesion. Militias and political movements are broken down almost strictly along religious and ethnic lines, with all vying for control of the city.

In terms of recovery then, there is a lack of a unified vision of what a recovered Mosul even looks like.

For its part, the U.S. has acknowledged these concerns, with Secretary of State Rex Tillerson warning other countries that if Iraq is not rebuilt, the conditions that engendered ISIS will remain.

But for these words, little is being done.

When asked if this lack of urgency and attention to rebuilding constitutes a moral failure, Nadim Houry is hesitant to frame it in such terms, because “There’s no morality in the Middle East right now…  I don’t think any these countries have been moral.”

Such a diagnosis offers little hope for meaningful reconciliation between fractured communities throughout Iraq and Syria. But in the charred remains of Mosul, a small youth movement is gaining momentum to rebuild the lost city.

This past Christmas, Members of Mosul’s Muslim community helped to clean and prepare churches for Christmas ceremonies. In addition, Mosuli residents are working together to clean the streets, re-open closed shops and move former residents back into their old homes.

They are trying to simply restore normality—a herculean task, but one that they are up for, even if the world moves on, unable to see the importance of reconstructing the same places they previously saw as prime targets for military conquest.