Published September 19th, 2021 - 08:08 GMT
People look at Notre-Dame de Paris cathedral, during the reconstruction work while April 15, 2021 will mark the two years anniversary of the fire that devastated the Cathedral, in the centre of the French capital Paris. Anne-Christine POUJOULAT / AFP

The Notre Dame cathedral in Paris set to open its doors in 2024, five years after a blaze badly burned the landmark building, according to a CNN report. 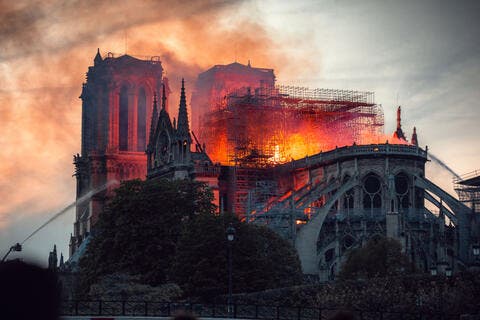 It Will be Saved: Notre Dame Cathedral's Restoration is a Delicate Process

Restoration group Friends of Notre Dame said in a statement Saturday that elements of the "safety phase" to secure the French Gothic architecture-style cathedral had been completed after the devastating fire collapsed its roof and spire in April 2019.

The work included wrapping and protecting the gargoyles and other sculptural elements, fortifying the most damaged pillars of the nave, reinforcing the flying buttresses, bracing gables to protect large rose windows and removing burnt scaffolding that had surrounded the spire.

"That means that we're officially saying that the cathedral is now saved, and that it's solid on its pillars, that its walls are solid," General Jean-Louis Georgelin, who is overseeing the reconstruction of the cathedral, told CNN affiliate BFMTV Saturday. "Well be able to firmly go ahead with the phase of restoring and rebuilding the parts destroyed by the fire, so that it's ready to reopen for services and public visits in 2024."

The 2024 date for reopening fulfills French President Emmanuel Macron's promise that reconstruction would be completed within five years of the disastrous fire.

According to the damage report, the walls of the nave, choir and two transepts suffered severe water damage and were no longer structurally sound, and the north tower belfry was partially burnt. The bells remain in place. The 250-year-old grand organ at the cathedral organ has been saved, but remains in critical condition due to water damage and lead that melted from the roof during the blaze.

Work on securing the cathedral was paused for three months last year due to the COVID-19 pandemic.

Reconstruction work is slated to begin in the coming months, according to the organization overseeing the effort, CNN reported. 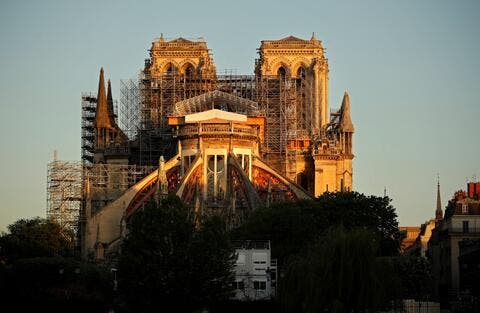 A definitive cause of the 2019 fire has not been established, but prosecutors said it might have been started by a burning cigarette or electrical malfunction.

Last year, a consensus was reached to restore the cathedral to its former appearance instead of a more modern rehabilitation, France's then-incoming culture minister Roselyne Bachelot said at the time.