As leaders of the countries of the Eurasian Economic Union prepared to meet in Kyrgyzstan on Friday, a tense mood gripped the nation’s capital, Bishkek.

Government forces were beaten back by supporters of Mr Atambayev, who has been holed up in Koy Tash since June. One government soldier was killed and up to 80 were injured. Mr Atambayev, who was wanted for questioning in relation to corruption charges, was detained the following day.

Supporters rallied at Bishkek’s central Ala Too Square, near to government buildings and the headquarters of the State Committee for National Security where Mr Atambayev will be held until August 26. Following an uneasy stand-off, demonstrators were dispersed, and relative normality returned to the capital.

Erica Marat, an Associate Professor at the National Defence University in Washington DC specialising in Central Asian Affairs argues that the primary source of contention between Messrs. Atambayev and Jeenbekov relates to a disagreement over power sharing. The election of Mr Jeenbekov marked Central Asia’s first peaceful handover of power from one democratically elected leader to another.

Yet since ending his Presidential term in late 2017 Mr Atambayev has sought to continue to play a central role in Kyrgyz politics, gambling on the pliability of his nominated successor Mr Jeenbekov. This has proven a significant miscalculation.

Yet, since ending his Presidential term in late 2017 Mr Atambayev has sought to continue to play a central role in Kyrgyz politics, gambling on the pliability of his nominated successor Mr Jeenbekov. This has proven a significant miscalculation.

Christopher Schwartz, an American researcher and journalist splitting his time between Central Asia and Belgium whilst completing a doctorate at KU Leuven notes that Mr Atambayev underestimated Mr Jeenbekov as a ‘pushover, someone he could manage from behind the scenes, thereby staying illicitly in power’.

Keen to stamp his own authority on the situation, Mr Jeenbekov has actively distanced himself from his predecessor. In June, the Kyrgyz parliament voted overwhelmingly to strip Mr Atambayev’s immunity from prosecution, leaving him open to corruption charges. Mr Atambayev is accused of involvement in corrupt dealings with TBEA, a Chinese company, related to the modernisation of the Bishkek thermal power station in January 2018, which led to an accident at the facility which left the capital without heating in freezing temperatures.

Mr Atambayev underestimated Mr Jeenbekov as a ‘pushover, someone he could manage from behind the scenes, thereby staying illicitly in power’.

Pursuing political opponents, and, in particular, Presidential predecessors through anti-corruption drives has proved a recurring feature in Kyrgyz politics. Johan Engvall, a Research Fellow at the Swedish Defence Research Agency and an expert on corruption in Kyrgyzstan notes that incumbents have tended to control and manage corruption whilst using anti-corruption campaigns against opponents: ‘Jeenbekov is now doing the same thing as President Akaev did in the late 1990s and early 2000s, and his successor Bakiev (2005-2010) and then Atambayev (2012-17) did.’

Endemic corruption is the norm in Kyrgyz politics. Mr Engvall adds ‘practices normally thought of as corrupt are the actual rules of the game’. Mr Schwartz argues that political parties ‘often serve as patronage networks’ and that sources of corruption are numerous.

What implications does the contest over power in Kyrgyzstan have for the longer-term prospects of democratic progress in what has long been the region’s most democratic polity? Ms Marat argues that there is a risk of Mr Jeenbekov centralising power in his own hands but that any move to do so would see a considerable popular response: ‘a dynamic civil society is likely to strike back against major attempts to return to authoritarianism’. 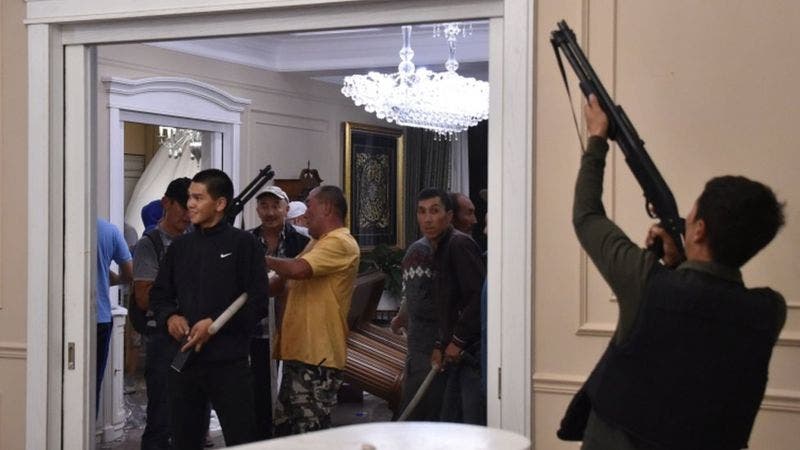 As Mr Schwartz notes, whilst the country’s leadership have not been immune to the temptations of authoritarianism, memories of recent political upheaval must surely caution political elites against rash decision making: ‘Kyrgyzstan’s young population feel themselves free and open to the future. They launched two popular revolutions in 2005 and 2010 and although these were generally financed and led by elites, it was everyday people who were motivated enough to risk their lives to overthrow the government.’

The worrying events of last week may have been tempered by the resolve of a population determinedly committed to democratic accountability.

As Colleen Wood, a researcher on Central Asian affairs at Columbia University in New York, points out: ‘It says something about the resilience of Kyrgyzstani civil servants and average citizens that within hours after the crowds dispersed on Ala Too square, people were back out sweeping the streets and getting back to life as usual.’

Mr Engvall cautions against mistaking intra-elite competition for everyday popular politics in the nation. Whilst the management and distribution of the spoils of corruption may be the prerogative of political elites, everyday Kyrgyz seek solutions to social and economic frustrations.

Ms Wood points to deep-seated economic problems in Kyrgyzstann - the country remains one of the top remittance receiving countries in the world as a percentage of GDP and opportunities for meaningful, well-paid work are scarce.

the country remains one of the top remittance receiving countries in the world as a percentage of GDP and opportunities for meaningful, well-paid work are scarce.

Kyrgyzstan’s GDP per capita is ten times lower than that of its larger neighbour Kazakhstan. Accusations of corruption and economic mismanagement have mixed with a growing resentment towards Chinese business activity in the country.

Ms Wood points to ‘bubbling frustration over Kyrgyzstan’s politicians making deals with China for infrastructure projects and extraction of natural resources, because many of these jobs do not go to Kyrgyz citizens and a lot of the money slated for building roads or improving access to water ends up in high-level officials’ pockets.’

‘It says something about the resilience of Kyrgyzstani civil servants and average citizens that within hours after the crowds dispersed on Ala Too square, people were back out sweeping the streets and getting back to life as usual.’

Mr Schwartz notes that, like in other Central Asian states, balancing the state’s secular identity with increasing religiosity remains an important challenge for political leaders and civil society. Additionally, managing ethnic diversity given periodic outbreaks of unrest between ethnic Kyrgyz and sizeable minorities of Uzbeks, Tajiks and Uighurs is key to developing a more egalitarian political settlement.

Whilst the political crisis that has gripped Kyrgyzstan in recent weeks may still spiral out of control, optimists may hope that it will precipitate an important political conversation on judicial and administrative reform.

Continuing on the winding path towards democratisation may appear difficult for this small Central Asian state, surrounded by powerful, authoritarian neighbours, but a dynamic civil society, a critical and free press, and a young and educated population which seeks a deepening of meaningful popular representation bodes well for the post-Atambayev era.