Activists took to the streets for a second day to protest after Friday's Supreme Court decision overturned nearly 50 years of federal abortion rights guaranteed under Roe vs. Wade. 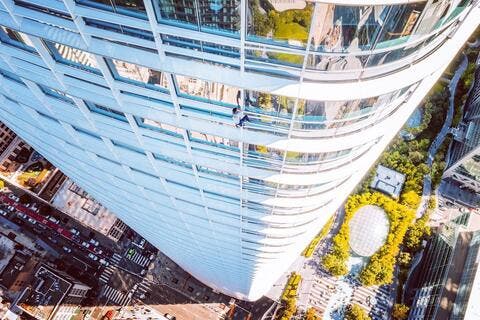 "We have seen a lot of chanting, a bit of confrontation because there have been people here on both sides of this issue, yelling at each other," CNN's Joe Johns reported from the protests on Saturday outside of the Supreme Court. "It is largely peaceful."

Women had traveled to D.C. from Dallas, Texas, and Florida to take part in the D.C. protest.

Today, the Supreme Court not only reversed nearly 50 years of precedent, it relegated the most intensely personal decision someone can make to the whims of politicians and ideologues—attacking the essential freedoms of millions of Americans.

People chanted "My body, my choice" on the steps of City Hall while carrying signs with messages including "You are banning safe abortions" and "I am women watch me vote."

In Mississippi, anti-abortion activists gathered early Saturday morning at the state's last abortion clinic that vowed at a press conference Friday to stay open for the next 10 days.

A woman was let into the clinic before it was technically even open because of all the "chaos" going on with anti-abortion protesters yelling outside, according to CNN's Nadia Romero.

Diane Derzis, owner of Jackson Women's Health Organization, vowed to help women find the services they need even after the Mississippi clinic is forced to close its doors.

Under state law, the abortion ban triggered by the Supreme Court decision is slated to go into effect 10 days after the state's Attorney General Lynn Fitch certifies the decision.

On Friday, one pro-choice protester, Guido Reichstadter, in Southwest D.C. climbed atop one of the Frederick Douglass Bridge's arches, flying a green banner and waving a yellow flag that read "Don't tread on my uterus," according to NBC Washington.

Reichstadter climbed down Saturday afternoon after sleeping on top of the bridge Friday night. Following the incident, he was placed in police custody and treated by DC Fire.

In Cedar Rapids, Iowa, a person was injured in a collision on Friday between a truck driver and one person in a group of protesters "attempting to legally cross the street," following "verbal confrontations" between the protestors and the truck driver, police said.

The protester had minor injuries, and was interviewed on-scene, and then taken to a local hospital for evaluation, according to police statement posted to Facebook. No arrest was announced.

"Cedar Rapids Police are canvassing the scene to obtain potential surveillance video and more information will be made available when possible," the statement said.

Video footage showed the truck allegedly pushing through the group of protesters causing one person to fall to the ground after making contact with the vehicle, CNN reported.

Linn County Supervisor Stacey Walker told The Gazette the incident "was an act of pure violence" against demonstrators protesting the Supreme Court's decision.

"It is my hope that the individual responsible for this act will be brought to justice, and that the basic human rights of all people can be honored in this country," Walker said.

In Eugene, Oregon, 10 people were arrested Friday night in a protest dubbed a "Night of Rage" against the abortion ruling.

Eugene Police said in the statement that members of a group of more than 75 people advanced toward officers, throwing smoke bombs and several filled water bottles.

Police said that officers warned protesters they were committing disorderly conduct and subject to arrest and deployed "inert pepper balls" with no chemical munitions, which helped decrease the size of the crowd.

Some officers suffered minor injuries during the clashes, police said.

"They don't understand the gravity of this decision," Tanya Matthews, a 26-year-old from South Carolina who opposed the repeal of Roe, told The Washington Post, as she watched anti-abortion demonstrators dancing and cracking champagne outside the courthouse. "Just because it's not legal doesn't mean it isn't going to happen."

The dueling factions of demonstrators in D.C. avoided serious confrontations and by Friday night no arrests were made. In Arizona, though, police deployed tear gas on protestors outside the State Capitol in downtown Phoenix on Friday night.

"Troopers deployed gas outside the Senate building after protesters attempted to break the glass," the Arizona Department of Public Safety said in a statement to 12 News.

"The crowd then moved to the Wesley Bolin Plaza where some monuments were vandalized. Gas was deployed again to disburse the crowd."

Protests also broke out Friday in cities including New York, Chicago, Nashville, San Francisco and Los Angeles, and in Nashville.

The Pentagon announced it will not recognize the overturning of Roe by the Supreme Court. It will still provide women's healthcare to military and spouses.

"I'm legally married, and to a wonderful woman," Paula Foster, a 58-year-old social worker protesting at Legislative Plaza in Nashville against the Supreme Court's decision, told the Post. "I'm afraid that I will no longer be able to have that protection."

Foster added that she also feared for her daughters.

"I'm frightened for them and the world they're growing up in," she said.

The highest court in the land had decided in 1973 that even though the Constitution doesn't mention abortion, it grants a broad right to obtain one, but its Dobbs vs. Jackson Women's Health Organization decision on Friday overturned that ruling.

The Supreme Court's decision makes the issue of abortion one for each state to decide.

As a result, at least 13 states, mainly in the South and Midwest, with "trigger bans," can ban abortion quickly or 30 days after the decision, and 26 states are likely to ban abortion.

Planned Parenthood of Utah filed a lawsuit Saturday to block a trigger ban against abortion that went into effect late Friday following the Supreme Court's decision, arguing that the federal abortion ban violates the state's constitution.

More progressive states such as California and New York have laws protecting abortion. 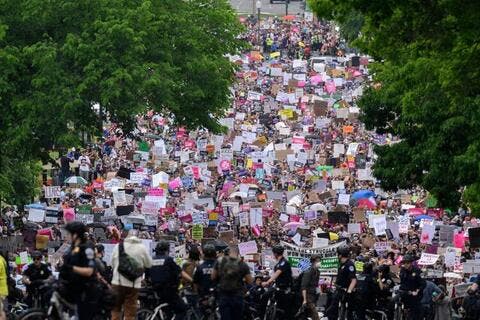 Thousands Rally Across The US For Abortion Rights

On Saturday, Minnesota Gov. Tim Walz issued an executive order providing protections for people coming to the state for reproductive health care from other states where abortion is criminalized.

Washington Gov. Jay Inslee said during a press conference Saturday afternoon, he will make his state a "sanctuary state," for reproductive choice for people across the country to access abortions. He also pledged a $1 million down payment to start subsidizing reproductive health care networks across the state.