Is Putin Planning to Use Nuclear Weapons in Ukraine?

Published May 29th, 2022 - 09:55 GMT
French engineer and specialist in 3D data acquisition Emmanuel Durand uses his laser-scanner on May 26, 2022, to map the architecture of the Karkhiv fire station built in 1887. (Photo by Dimitar DILKOFF / AFP)
Highlights
Putin put his nuclear forces on high alert in February, widely seen as a warning

Russia is unlikely to use its tactical nuclear weapons against Ukraine, according to the country's ambassador to Britain. 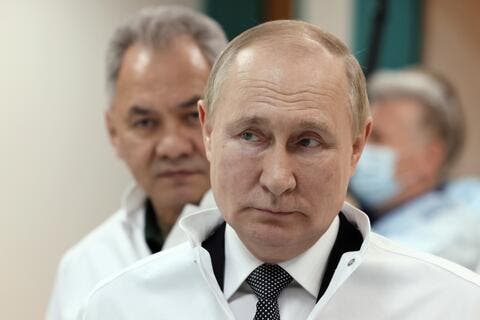 Has Putin Only Three Years to Live as The Doctors Claim?

Andrei Kelin said that due to Russia's military rules, nuclear weapons are under strict provision and not used for conflicts such as Ukraine.

Putin put his nuclear forces on high alert three months ago in a move many considered to be a warning after criticising Nato and the West, the BBC reports.

At the time, Britain's Defence Secretary Ben Wallace described it as a diversion tactic away from the failures of its delayed invasion of Ukraine.

Russia is thought to have around 2,000 tactical nuclear weapons.

Ambassador Kelin has denied Russia shelled civilians in Ukraine and insists claims of war crimes in Bucha are 'a fabrication'.

He added: 'The mayor of Bucha in his initial statement has confirmed that Russian troops has left, everything is clean and calm, the town in a normal state.

'Nothing is happening, no bodies are on the street. But next, after it has been done - but anyway...

'In our view it is a fabrication. It is used just to interrupt negotiations," the ambassador replied.'

Russia's Foreign Minister Sergei Lavrov has previously insisted pictures of bodies strewn in the streets of Bucha were 'staged' - a claim contradicted by numerous eyewitnesses.