Published August 18th, 2022 - 12:29 GMT
Algerian firefighters were today battling a string of blazes, fanned by drought and a blistering heatwave, that have killed at least 38 people and left destruction in their wake. (Photo by AFP)
Highlights
Authorities close several highways due to fires

The death toll of Algeria's forest fires rose to 31 in addition to 160 injuries, the Algerian Civil Protection authority said on Thursday. 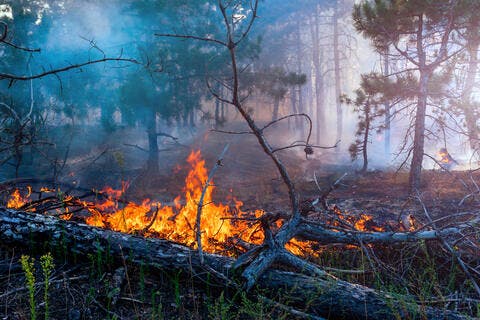 In a statement, it said that four deaths were reported in the northeastern El Tarf province along the borders with Tunisia and one death was reported in another northeastern province, Guelma.

Local media, however, said there are dozens of others still missing.

Civil protection officials, meanwhile, stated that teams were working to put out 39 fires across 14 provinces, most of them in the country's northeast.

President Abdelmadjid Tebboune offered his condolences to the families of the victims in the provinces of Setif and El Tarf, according to an official statement.

On Thursday, a statement by the gendarmerie said the road linking the city of El Tarf and the Bouteldja region had been closed, in addition to the route linking El Kala, and also in El Tarf and the Annaba province.

The fires coincided with a record heat wave that hit northeastern Algeria, exceeding 45 C (113 F), as well as with hot and strong southern winds.