The American Secretary of State will have his work cut out. A recent series of demands issued by the GCC Saudi-led coalition called for the closing of Doha based Al-Jazeera News, a downgrading of the relationship with Iran and the closure of a Turkish military base.

Analysts and mainstream outlets have argued that the demands appear punitive, rather than intended to reduce tensions or achieve a diplomatic solution. 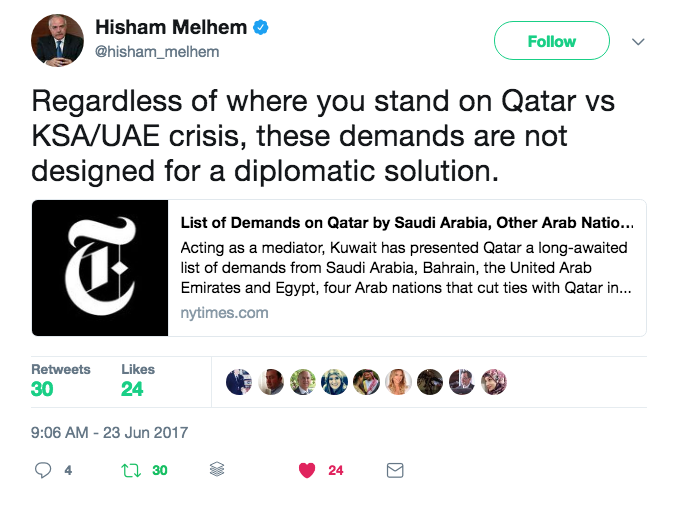 Inside Saudi Arabia, the line of royal succession was transferred to Mohammed bin Salman, the son of King Salman, on June 21st. According to Stratfor, the powers already vested in bin Salman led to him being dubbed “Mr. Everything” by some western governments, even before this change in succession was announced.

At the center of the succession plan, lies a 5% IPO of the Saudi oil giant Aramco. The sale is expected to bring in an expected $25-100 billion, with the proceeds channelled into a Saudi Public Investment Fund. This fund will pay for economic diversification plans, as well as support the fragile social contract upon which the legitimacy of the House of Saud is based.

Within Saudi Arabia, reports are suggestive of disagreement within the royal family over whether to float the IPO on the London Stock Exchange or New York. The former represents a more favorable legislative climate. The latter represents another way for Saudi Arabia to align with Washington. Bin Salman is responsible for Saudi Arabia’s defense portfolio and in 2016 made a series of investments in Silicon Valley, including with Uber. The Aramco IPO is a significant factor in efforts to further consolidate Saudi Arabia’s relationship with Washington.

Whether these investments will allow bin Salman to better negotiate the social fabric of his own country, including with the conservative clerical establishment, remain to be seen. Unlike previous rulers, bin Salman will not be able to delay reforms for future generations to negotiate.

Saudi Arabia’s decision to move against Qatar is a device to exert its will over the GCC military, economic and political union at the same time as positioning itself as the main Arab ally of the United States in the region.

Behind closed doors support for Israel, the isolation of Qatar and the promotion of bin Salman to Crown Prince are elements of Saudi Arabia’s great pivot - or gamble - toward the United States.