The Rise and Fall of the Muslim Brotherhood

The Muslim Brotherhood’s golden opportunity was the Arab Spring, but it failed to bring about its pan-Islamist vision in the Arab countries it gained control over. It tried to use democracy as a means to attain power, but the local population began to resent the Islamist group's incompotence to rule.

The most symbolic ending to their movement was the sudden death of ex-Egyptian President, and Muslim Brotherhood leader, Mohammed Morsi, who suddenly collapsed in Cairo’s courts on the 17th of June 2019.

Morsi’s death represented the culmination of a continuous failure by the Muslim Brotherhood – known in Arabic as the Ikhwan – to establish leadership where it attained power after the Arab revolutions. The sudden crackdown from its of neighbors of Saudi Arabia and the United Arab Emirates also greatly damaged its prospects for success.

According to document leaked by the Intercept, the Muslim Brotherhood also reportedly held a summit with the Iranian Revolutionary Guard Corps, a sworn enemy of Saudi Arabia, the UAE and Israel, and by extension the United States.

Defining the Muslim Brotherhood as a terrorist threat represents a radical change in America's foreign policy. During the Arab Spring from 2011 to 2015, under ex-president Barack Obama, the US supported the Muslim Brotherhood against autocratic rulers across the Middle East and North Africa. Most notably, the Islamist parties were given support in North Africa against Libya's Colonel Muammar Qaddafi, Tunisia's Zine El-Abedine Ben Ali and Egypt's Hosni Mubarak.

According to many locals, these rulers were corrupt, but they also kept extremism in their country at bay. With Qatar backing Islamist groups among the revolutionaries, the mass movement against autocracy was hijacked by a foreign power looking to advance its influence with a fundamentalist view of Islam. “Qatar's backing of Islamists has co-opted our revolution,” a Tunisian, who asked for anonymity for security reasons said to Al-Bawaba. The revolution brought hopes of overthrowing the repressive leaderships that had ruled Arab countries for decades, but those hopes were soon met by a harsh reality.

“Qatar's backing of Islamists has co-opted our revolution,” a Tunisian, who asked for anonymity for security reasons, said to Al-Bawaba.

Qatar’s backing of Islamist groups across the region lead to further de-stabilization, insecurity and a rise in extremism. Tunisia now has the highest number of foreign jihadist fighters in the world, and Libya is still in a chaotic civil war, ruled by two rival governments, rogue militias, and local tribes.

The Brotherhood’s leadership in Egypt failed when Morsi was overthrown during widespread protests over dissatisfaction with his rule. Now Egypt is led by another strongman, Abdel Fattah Al-Sisi, who has cracked down on Islamists even harder than before.

But the Muslim Brotherhood's rivals in these countries are not immune from criticism of extremism either. Their opposing parties in Tunisia and Libya are supported by Saudi Arabia and the UAE. In Libya’s civil war state, this has led many Salafists and religious extremists to rule in the army of Khalifa Haftar – the military leader claiming to oppose Islamists in Libya.

The difference between leaders like Haftar and those supported by the Muslim Brotherhood isn't religious, but political: those like Haftar believe in the concept of the nation-state; Islamists believe in erasing borders for a Caliphate that stretches across the region.  For this reason, Haftar managed to gain consent by providing civilians with security, while groups like the Brotherhood sowed instability by trying to destroy the very concept of their nationality.

The difference between people like Haftar and the Brotherhood isn't religious, but political: leaders like Haftar believe in the concept of the nation-state, the Islamists do not

Minority Christian communities suffered the most as a result of the instability and the Brotherhood's willful neglect towards rooting out the hardline extremists like ISIS and Al-Qaeda. The city of Derna in Libya, which used to be home to a small population of Roman Catholics, was almost wiped out after Islamists turned a blind eye to jihadist attacks. “I had to flee because ISIS at the time took my brother for ransom,” a young man who now lives in Benghazi, who also asked for anonymity over security told Al-Bawaba.

This failure did not limit itself to Libya. The Muslim Brotherhood's culmination to power in Egypt in 2012 made the Coptic Christian minority face increasing persecution. Dozens of churches were vandalized and even set on fire during their tenure. Despite how the Muslim Brotherhood Islamists were removed from power after mass popular discontent, and they received harsh crackdowns against their activities from the new Egyptian President Al-Sisi, 2016 and 2017 has seen a constant wave of terror attacks targeting Copts who now live in fear for their lives.

Dozens of churches were vandalized and even set on fire during the Brotherhood’s tenure. Despite their removal from power and a crackdown from the new Egyptian President Al-Sisi, 2016 and 2017 has seen a constant wave of terror attacks targeting Copts who now live in fear for their lives.

Qatar did its best to portray the Arab revolutions in a positive light, mainly through its state-funded channel of Al Jazeera, which is now resented in much of North Africa and increasingly in the West because of its editorial double standards. Its Arabic channel favours a fundamentalist view of Islam, hosting guests like Yusuf Al-Qaradawi, who stated on Al Jazeera Arabic’s program 'Sharia and Life' that the penalty for homosexuality should be lashing.

On the other hand, Al Jazeera English’s channel, which includes the video production of AJ+, criticizes the United States for the oppression of the LGBTQ community. “We dislike Al Jazeera for the false news they spread during the Arab Spring, and for their dual editorial lines in Arabic and English - they’re hypocrites,” a Muslim woman in Tunisia, who also asked for anonymity for security reasons said to Al-Bawaba.

Al Jazeera's duplicious image, when put in context with the Muslim Brotherhood's 1991 manifesto, gives way to theories that it uses such tactics to undermine Western society by sowing division internally. The manifesto stated it had a plan for a “grand jihad to eliminate and destroy Western civilization from within.” And the plan was never denied by any major Muslim Brotherhood leader.

Its Arabic channel favours a fundamentalist view of Islam, hosting guests like Yusuf Al-Qaradawi, who stated on Al Jazeera Arabic’s program 'Sharia and Life' that the penalty for homosexuality should be lashing. In the meantime, Al Jazeera English’s channel, which has now extended with the video channel of AJ+, criticizes the United States for the oppression of the LGBTQ community

Qatar and the Muslim Brotherhood's political and media efforts also had disastrous consequences in Europe. Al Jazeera English’s channel pushed for Europe to open its gates indiscriminately, while Qatar kept a strict refugee intake, even from is own fellow Muslims seeking refuge. Europe decided to open its borders, but the integration of the newly arrived Muslim population became increasingly difficult to sustain. 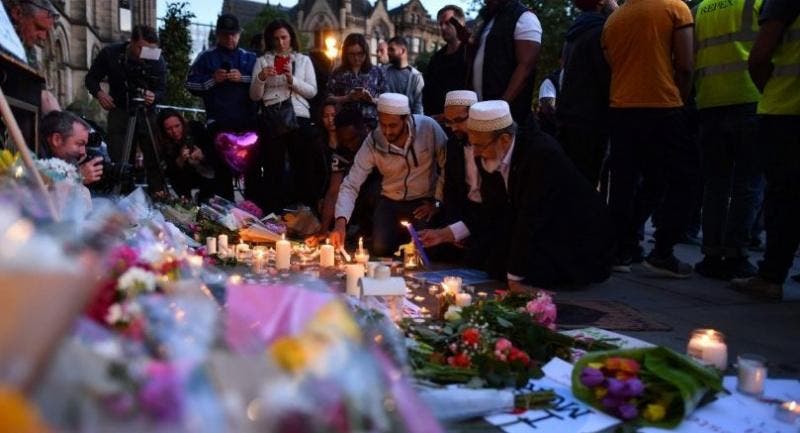 Albert Square, England, May 22nd, 2017: People light candles in solidarity with the victims of the Manchester Bombing terrorist attack.

As a result, national populists who promised to protect Europe against a foreign menace began gaining momentum. Western European governments during the migrant crisis had failed to make a distinction between genuine refugees who needed to be salvaged and masked Islamist extremists who were escaping to Europe for political reasons to advance their causes for jihad.

The best case to exemplify this failure was the Manchester Bombing in 2017. The perpetrator, Salman Abedi, was a UK born-Muslim to Libyan parents who fled the Ghaddafi regime because of their Islamist activities. Abedi prayed at the Didsbury mosque in Manchester, which was run by affiliates of the Muslim Brotherhood.

Abedi’s father expressed sympathy for jihadist groups linked to Al-Qaeda and ISIS in Libya. And these terrorist groups in countries like Libya are linked, even if indirectly, with the Muslim Brotherhood militias. “The Brotherhood aligns itself with more extremist groups that help them protect their interests," a young man from a civil rights organization in Libya, who also asked for anonymity over security reasons told Al-Bawaba.

The Muslim Brotherhood’s political failure at home does not mean its influence abroad has faded, as Qatar invested heavily in a media campaign in Western countries to protect its image. If the Trump administration decides to designate the Islamist group as a terrorist organization, the movement might be once again relegated to its former underground activities, or choose to ally openly with Iran, the main country on the US’s enemy list.