Published March 27th, 2022 - 06:39 GMT
At least five people wounded in two strikes on Lviv, the regional governor said, in a rare attack on a city that has escaped serious fighting since Russian troops invaded last month. (Photo by Ronaldo SCHEMIDT and RONALDO SCHEMIDT / AFP)
Highlights
At least 5 people injured in explosions due to missile attacks on western Ukrainian city near Polish border

At least five people were injured in explosions due to Russian missile attacks hitting a fuel tank near the city of Lviv in western Ukraine, said a local official on Saturday. 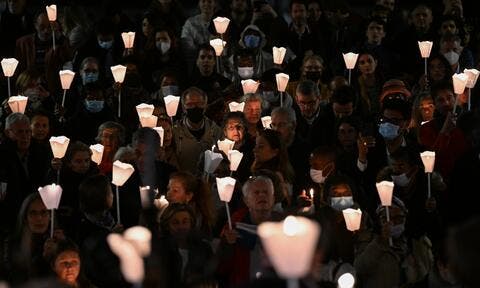 An Additional 7,331 Civilians Leave Their Homes in Ukraine

Maksym Kozytskyi, head of the Regional Military Administration, said on Telegram that three large explosions took place as a result of two guided missile attacks on a fuel depot near Lviv, a city 60 kilometers (40 miles) from the border with Poland.

Kozytskyi added that no apartment building in the city was hit in the Russian air attacks.

Russia has bombed a fuel tank in the center of Lviv leaving, for the moment, 5 wounded people (Adri Salido/ @anadoluagency @anadoluimages ) pic.twitter.com/NRvspsjE6J

An open-air concert in the center of Lviv was interrupted due to warning sirens sounding before the Russian attack.

Members of the Lviv National Academy of Music Orchestra, performing in front of the opera and ballet building, went into shelters after hearing the sirens.

Hundreds of people attending the concert also fled for safety. Shortly afterwards, explosions could be heard, later identified as Russia hitting a fuel tank in the city center.

The Russia-Ukraine war, which began on Feb. 24, has met international outrage, with the EU, US and UK, among others, implementing tough financial sanctions on Moscow. 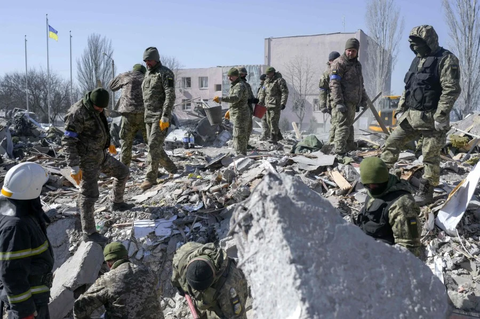 Does Anybody Know Who is Losing in Ukraine?

At least 1,035 civilians have been killed in Ukraine and 1,650 injured, according to UN estimates, while cautioning that the true figure is likely far higher.

More than 3.7 million Ukrainians have also fled to neighboring countries, with millions more displaced inside the country, according to the UN refugee agency.