Published June 10th, 2021 - 10:06 GMT
A court in Moscow was deliberating on June 9, 2021 whether to brand jailed Kremlin critic Alexei Navalny's prominient anti-corruption organisation extremist, which would ban its activities and could see staff prosecuted. Vasily MAXIMOV / AFP
Highlights
Navalny's organizations were organized as an 'extremist' according to the Russian court.

A Russian court has outlawed the political movement of jailed opposition leader Alexei Navalny as an "extremist" organization, attracting the condemnation of Western nations. 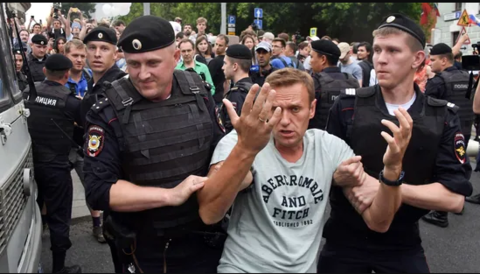 The order goes immediately into effect and disbands the network of organizations, the court said, effectively shutting them down.

The legal organization representing the two non-profits Team 29 tweeted updates during the 12-and-a-half-hour closed-door proceedings, concluding with the explanation that the designation bans the organizations from disseminating any information, performing financial transactions, participating in elections and organizing actions under threat of six years' imprisonment.

In a statement posted to his official Instagram account, Navalny said it matters little that they designated his organizations as their movement is not a name, an office or a piece of paper.

"We are a group of people who united and organize those citizens of Russia who are against corruption, for fair courts and equality of all before the law," he said. "There are millions of them. You are like that. As long as you are, we are not going anywhere."

"We are evolving," he said. "Let's adapt. But we will not retreat from our goals and ideas. This is our country and we have no other."

The staunch critic of Russian President Vladimir Putin was arrested Jan. 17 upon landing in Moscow for violating the terms of a 2014 suspended prison sentence on charges that have been widely panned as arbitrary.

Navalny, who turned 45 late last week, was returning to Russia after receiving months of medical treatment in Germany after being poisoned with a Soviet-era nerve agent in an attack late last summer that has been blamed on the Kremlin, though Putin has denied any involvement.

Ned Price, the spokesman for the U.S. Department of State, accused Russia in a statement of effectively criminalizing one of the few remaining independent political movements in the country.

He said the court's designation puts staff, volunteers and thousands of Navalny's supporters at risk of criminal prosecution and imprisonment for exercising their right to free speech while further restricting opposition candidates from appearing on election ballots.

"We urge Russia to cease the abuse of 'extremism' designations to target nonviolent organizations and end its repression of Mr. Navalny and his supporters," Price said. "The Russian people, like all people, have the right to speak freely, form peaceful associations to common ends, exercise religious freedom and have their voices heard through free and fair elections."

In Britain, Foreign Secretary Dominic Raab in a statement called the ruling "perverse" and "another Kafkaesque attack on those standing up against corruption and for open societies and is a deliberate attempt to effectively outlaw genuine political opposition in Russia."

Josep Borrell, the high representative of the European Union, which has also sanctioned Russia over its treatment of Navalny, on Thursday said labeling the organizations as extremists groups "marks the most serious effort to date" by the Kremlin to suppress political opposition.

"It is an unfounded decision that confirms a negative pattern of a systematic crackdown on human rights and freedoms, which are enshrined in the Russian constitution," he said in a statement. "This ruling will have far-reaching consequences for the Russian civil society, opposition and critical voices."

The designations were handed down days before President Joe Biden, who is in Europe this week for meetings with the G7 and allies, will sit down for a summit with Putin on Wednesday, where Russia's treatment of Navalny is expected to be a topic.

The United States has already imposed punitive measures against Russia over its poisoning and detention of Navalny, including tightening export sanctions last month.

Lyubov Sobol, a lawyer for the Anti-Corruption Foundation, also known as the FBK, said on Twitter that the court process "will go down in history textbooks as one of the most shameful during the year's of Putin's rule."

A Moscow court declared the political and anti-corruption networks of jailed opposition leader Alexei Navalny “extremist” organizations, a move that will essentially crush the most formidable resistance to the Kremlin and force it underground https://t.co/iUAbb9cIMC

FBK spokeswoman Kira Yarmysh said in a statement posted to Instagram that she started working at the organization seven years ago at the age of 24. 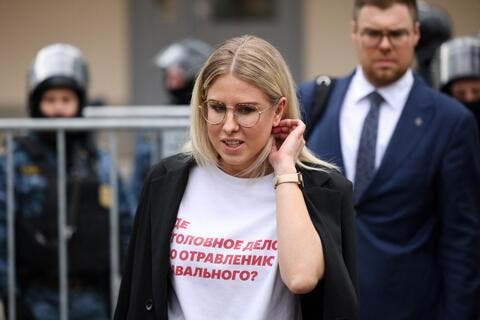 Now, the FBK is considered an extremist organization, she is under house arrest and she is longer its press secretary.

"But I still remain Alexei's press secretary," she said. "People are the main thing that has value, and as long as there are those who want our country to be free, rich and prosperous, this cannot be prohibited."