For the past few months financial markets the world over have been transfixed by the prospect of the world’s most valuable company – Saudi Aramco Oil – offering 5% of its stock in an Initial Public Offering [IPO].

Basically, the IPO will be huge. Easily the biggest IPO ever, and maybe one of the biggest business deals ever to be negotiated.

Think less Facebook buying Whatsapp; more Louisiana Purchase. This could cause the global political faultlines to shift for years to come.

In an apparent move to accommodate the IPO, the London Stock Exchange reportedly discussed changing its rules so that companies floating less than 25% of shares can apply for a ‘premium listing.’

When Crown Prince Mohammad bin Salman muted the possibility of an Aramco IPO in January 2016, in a carefully worded press release, it wasn’t just financial markets that took note. U.S. President Donald Trump’s first overseas visit was to Saudi Arabia. Since taking office, the President has tweeted regularly on the Dow Jones rally and U.S. Stock Market. There is every reason to believe that an Aramco listing in New York would be something the current administration would be favorable towards as part of its “Make America Great Again” program.

As London and New York position themselves for a piece of what can best be described as Saudi Arabia’s sovereign wealth, there is one other market which is quietly and patiently studying the deal: China.

For Beijing, a Hong Kong listing of Saudi Aramco carries with it several economic and strategic benefits.  For the past decade China has been working tirelessly to improve its access to energy in Africa, most recently through the building of a giant international project called the ‘New Silk Road’, providing access to both Russian and Iranian energy markets. A shareholding in Saudi Aramco would support this geopolitical aim, at the same time as providing a relationship with one of the Middle East’s most influential and powerful countries.

An Aramco listing in China would not only deprive the West of all of the above: it would be a clear symbol of power shifting East globally, and of a multipolar world order where London and New York financial markets are no longer the only option. 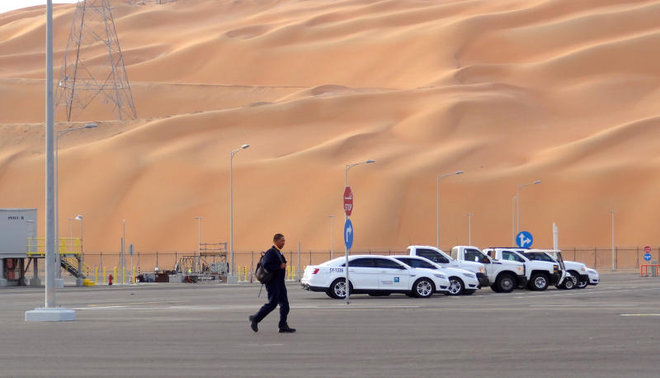 Despite the historical sums involved, the listing has never been just about money. The future of Saudi Arabia itself and the dynastic ambitions of the Al Saud family are intimately tried into every aspect of the flotation, which was originally to be used to finance an ambitious program of public works in infrastructure, education and tourism known as “Vision 2030.”

Similar to Roosevelt’s New Deal, the idea of the “Vision 2030” program is to jump-start new economic life into the country by increasing work-force participation, entrepreneurship and transitioning to a more diversified economy. Recent laws allowing women to drive, or abolishing decades old guardianship laws, can be interpreted as part of a process towards this transition and a not-so-distant future where Saudi Arabia has no other choice but to compete as part of a global economic system.

The role of Aramco as the centerpiece of Saudi Arabia’s future economic strategy, may be what kills a successful public offering of the company.

It’s not that the Saudi Aramco IPO is too big to fail – it’s that it might be too big to happen.

Too big to happen?

From the geopolitical implications of a listing in London, New York or Hong Kong, to the internal dynamics of selling shares in what many Saudi Arabian citizens regard as their birthright – cheap energy, and a state-subsidized existence – any public offering of Saudi Aramco is fraught with complications that if badly negotiated, could threaten the Saudi state as a whole.

Although anxious for political and social change, many young Saudi’s are anxious that the Saudi Aramco IPO may be the beginnings of a future less prosperous than the one their parents enjoyed.

In a rare move, the Crown Prince has given several prominent interviews inside Saudi Arabia to explain the National Transformation Plan on television. It has been made clear inside the Kingdom that the state will retain a 95% stake in the company, and will continue to bankroll the budget as a whole.

For reformers, the Saudi Aramco IPO is the only way for Saudi Arabia to provide an opportunity for itself beyond oil, reliant on its young people and more integrated into the international community.

For critics, even a 5% sale of Saudi Aramco is a trojan horse toward outside interference within the Kingdom’s affairs.

It will also force Saudi Aramco itself to become far more transparent about how long its oil reserves can last, how closely it is tied to the ruling family, and how it’s global investments are managed within a corporate structure that seems to bear some resemblance to a large city-state.

As international investors come in, pressure will be applied to temper, or remove, the massive subsidies that Saudi Arabia provides to its own people at the gas pump, as well as the massive nation-building projects the company has undertaken in the past.

A situation where Saudi Aramco does not pay a dividend, but Saudi nationals are paying well below the market rate at the pump, could lead to tension.

In addition to these domestic concerns, it’s not inconceivable that a successful flotation in New York or London could in the longer run lead to fiction with key allies, rather than enhanced relations. Saudi Aramco is Saudi Arabia – even the slightest share fluctuation or accounting enquiry may affect relations with Saudi Arabia’s main defense provider if listed in New York, or affect important diplomatic relations with Britain, if listed in London.

The ultimate answer might not be a public offering, but a private sale of an undisclosed amount to a buyer with deep pockets, and a talent for not asking too many questions.

The advantage of this would be the avoidance of any embarrassment for the Al Saud family, and a way for foreign cities that have been competing over the IPO to not lose face.

There’s a chance the world’s biggest IPO might not happen. The IPO may move east, in some other form. Regardless, the status of Saudi Aramco will closely reflect the ambitions of Saudi Arabia as a whole.