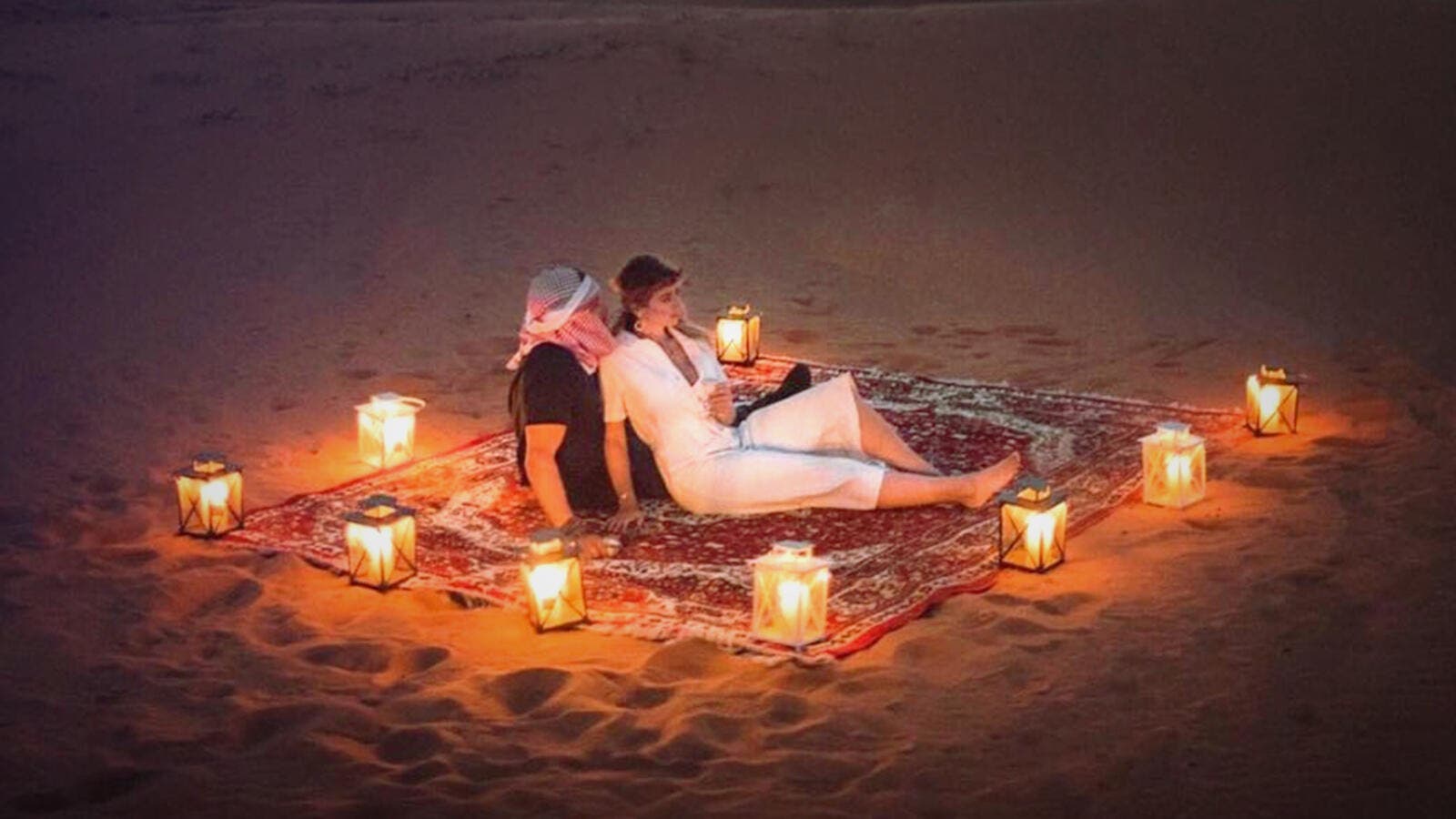 Dotted across major city centers and Instagram feeds are sleek depictions of a vast desert landscape waiting to be discovered: explorers gazing from plateaus onto mountains colored dark-red by a fading sun: and of course, camels and traditional red-and-white keffiyehs.

Placed neatly over the images of paradise is a subtle directive: “Visit Saudi.”

The Visit Saudi campaign represents a multifaceted effort by the Saudi state and state-linked NGOs to attract international tourists to Saudi Arabia--a country that has been inaccessible for most people on Earth since its inception in the early 20th century.

The Visit Saudi campaign represents a multifaceted effort by the Saudi state and state-linked NGOs to attract international tourists to Saudi Arabia--a country that has been inaccessible for most people on Earth since its inception in the early 20th century.

A critical part of this campaign involves paying social media influencers and community leaders to visit the country, where they are given exclusive access to future tourist destinations and educated about the culture of Saudi Arabia. In interviews with Al Bawaba, influencers and community leaders who visited Saudi expressed a keen desire to personally explore the country  for themselves.

Taken together, the influencers and community leaders are being effectively recruited to export what the country has been so desperately lacking in the international sphere: cultural power.

With ongoing backlash from the planned murder of Washington Post journalist Jamal Khashoggi and the intractable war in Yemen that has killed over 100,000 people, Saudi Arabia has spent the past fifty years exporting a fundamentalist Wahhabi religious ideology around the Middle East and the world. Now the game is up, and the country is looking to refine its image; seemingly without changing its behavior.

Deploying strategic posts filled with vivid prose and beautiful composition, the Visit Saudi campaign may provide Saudi the opportunity to revamp its image.

While protocols for product placements and bot and troll farms are already in place, well-meaning influencers repeating Saudi-state talking points is a new challenge that has no obvious solution.

well-meaning influencers repeating Saudi-state talking points is a new challenge that has no obvious solution.

Thanks in part to Saudi’s recently relaxed tourist visa regulations and sponsorship from the Saudi tourism ministry and NGOs, Instagram personalities are able to espouse the virtues of Saudi living. The trips cataloged under the hashtag #VisitSaudi depict a desert paradise. Though there is little mention of Saudi’s severe governance-style or its regular domestic crackdowns against dissent.

According to Raihan Ismail, a lecturer in Islamic Studies at the Australia National University, notes that this social media campaign comes with significant ethical impacts that must be considered.

“The Saudi government is investing so much in trying to reconstruct its image, particularly after the assassination of Jamal Khashoggi, the Saudi journalist who was killed in the Saudi consulate in Turkey,” she said.

“If someone goes to Saudi Arabia and sees all the changes that are taking place in Saudi Arabia and how some Saudis particularly younger Saudis are enjoying themselves, of course they’re going to say that ‘this is great the Saudi state is changing its liberalising’. But on the other hand, we’re dealing with a very repressive state.’

In the wake of Khashoggi’s murder, which the CIA concluded was ordered by bin Salman Crown Prince Mohammed bin Salman, prominent PR and lobbying firms that were once loyal to Saudi as a client cancelled their contracts with the regime, temporarily making the government a pariah. The strategy to pay influencers could signal a shift in the Saudi strategy towards channelling funds into shaping popular perceptions of the country.

It may also relate to a domestic strategy bin Salman has deployed to maintain the loyalty of Saudi’s youth.

When bin Salman gained the powerful role of Crown Prince in June 2017, pressuring who was originally heir to the throne to the sidelines, he became the country’s de facto ruler. Immediately, he announced a nationwide reform plan that included diversifying Saudi’s economy away from oil and centralizing power around him exclusively.

"This is nothing new in the industry. Saudi is no different; it’s just a controversial place."

To achieve both tasks, he appealed to the youth of Saudi, who make up a majority of the population and who constitute a powerful domestic bloc of support for him.

“Our real wealth lies in the ambition of our people and the potential of our younger generation,” an official message from bin Salman on his nationwide ‘Vision 2030’ reform plan reads.

“They are our nation’s pride and the architects of our future.”

Following his ascent, bin Salman reigned in the power of the religious police and allowed women to drive. Around the same time, he began rounding up prominent human rights activists, including women like Noha al-Balawi and Loujain al-Hathloul who campaigned for their right to drive.

It may also relate to a domestic strategy bin Salman has deployed to maintain the loyalty of Saudi’s youth.

While he called on Saudi to open up culturally and financially to the rest of the world, he also began restricting political freedom in the country, most dramatically by mass-arresting rival Saudi elites and royalty under the guise of an anti-corruption campaign. Some of the elites were reportedly tortured.

Bin Salman ordered them to be detained in Riyadh’s Ritz-Carlton Hotel, where one Saudi general was reportedly tortured to death. Images of the elites being detained in the Ritz showed dozens of thin mattress lining the ground of the hotel's main ballroom.

(A still image from a video captured inside the Ritz Carlton Hotel in Riyadh, Saudi Arabia)

The Ritz, and its opulent ballroom, has since become one of the destinations of guided and independent tours through the country. In photos with influencers posing in the same ballroom that housed the jailed elites, no mention of the hotel’s use as a torture site is made.

Elona Karafin, a Ukrainian-born American blogger with over 110,000 followers on Instagram, told Al Bawaba she was aware of the country’s controversies, but wished to explore the country to gain a local perspective so she traveled to it independently with the new tourist visa program.

“Traveling to certain places does not mean you agree to local government politics,” she says.

“Tour boards all over the world fly out journalists, bloggers and influencers on FAM [familiarization] trips. This is nothing new in the industry. Saudi is no different; it’s just a controversial place.”

The Saudi tourism board has reportedly told sponsored influencers not to speak to the media about their trips. But more broadly, the strategy benefits from non-sponsored influencers repeating regime talking points in posts and tagging their posts with state-curated hashtags.

It may be straightforward for social media platforms to delete the posts of trolls and tag posts advertising products, but it is more difficult to highlight posts that are the results of trips financed by government-linked organizations or that repeat regime talking points.

The Saudi tourism board has reportedly told sponsored influencers not to speak to the media about their trips.

In addition to trips backed directly by Saudi’s tourism board, several NGOs are offering paid trips for influencers and community leaders to attend guided tours and sit in on informational sessions regarding Saudi’s history and cultural promise. The most prominent organization sponsoring these trips is Gateway KSA.

Dedicated to showing “a side of Saudi Arabia you’ve never seen,” Gateway KSA has partnered with elite educational institutions like Harvard, Oxford, the London School of Economics and Tsinghua University to send a delegation of students to the country for a crash course in cultural education on Saudi Arabia.

One of the leaders of Gateway KSA is Prince Turki al-Faisal al-Saud, who was formerly the head of Saudi’s secret intelligence apparatus, also known as Al Mukhabarat Al 'Ammah.

“I can guarantee after ten days in KSA that people are kind and friendly, despite their leaders,” one participant in KSA Gateway told Al Bawaba.

“I recognize that many people are against the Saudi ‘ads’ because they feel it’s very fabricated and paid for.”

A key part of KSA Gateway’s program is taking participants to tourist destinations that are currently closed from public view. Once there, they are able to pose in front of empty, serene landscapes or in front of ancient facades carved into cliffs from the Nabatean Kingdom.

Neatly curated images of the trips inevitably find their way onto the social media feeds of the cherry-picked participants.

“Of course I pointed out many issues related to human rights,” the participant recalled, adding that many of her questions regarding human rights were left unanswered by Saudi officials.

The strategic use of social media platforms and cultural exchanges to project Saudi soft power globally exposes uneasy tensions: notably that with influencers comes profound influence and the ability to shape perceptions to a targeted audience, whether the object being sold is a beauty product, a video game, or the legitimacy of an authoritarian government.

“I think that there have been tremendous changes that happened in Saudi in the last decade which is making it a more comfortable place for tourism,” Elona Karafin said.

“I recognize that many people are against the Saudi ‘ads’ because they feel it’s very fabricated and paid for.”