Published January 19th, 2020 - 08:28 GMT
An Iranian long-range Shahab-3 missile is fired in desert terrain at an unspecified location in Iran on September 28, 2009. New documents show the regime was trying to develop nuclear warheads. (AFP/ File Photo)
Highlights
It is from an Iranian official requesting the parameters of a warhead fitted on a missile in November 2002.

A never-seen-before secret Iranian government document proves the regime was trying to build a nuclear weapon as far back as 2002.

It shows scientists outlining their proposals for a 'warhead', which are given the green light by Tehran's top nuclear official.

The document was seized as part of a raid by Israeli intelligence agents on a compound in Tehran in 2018, and is now being exclusively revealed to the world by MailOnline.

The damning nuclear blueprint forms the centrepiece of a soon-to-be published report by the Friends of Israel Initiative (FOII), a group of foreign policy experts including several former presidents and prime ministers.

As part of a fact-finding mission to the country led by Canada's former foreign minister John Baird, they were given exclusive access to the haul of documents stashed in the Tehran hanger.

This included a piece of paper dated November 28, 2002, which they say is from a 'senior Iranian official requesting the parameters of a warhead fitted on a missile'.

Scribbled in the top left corner is a note from Moshen Fakhrizadeh, Iran's nuclear science chief, who writes: 'In the name of God. Right now in a treatment process. Please archive the original script of the document. Fakhrizadeh.'

The FOII report claims this proves the 'military dimension' of Iran's nuclear project, despite the regime claiming its programme did not go beyond 'feasibility' studies. 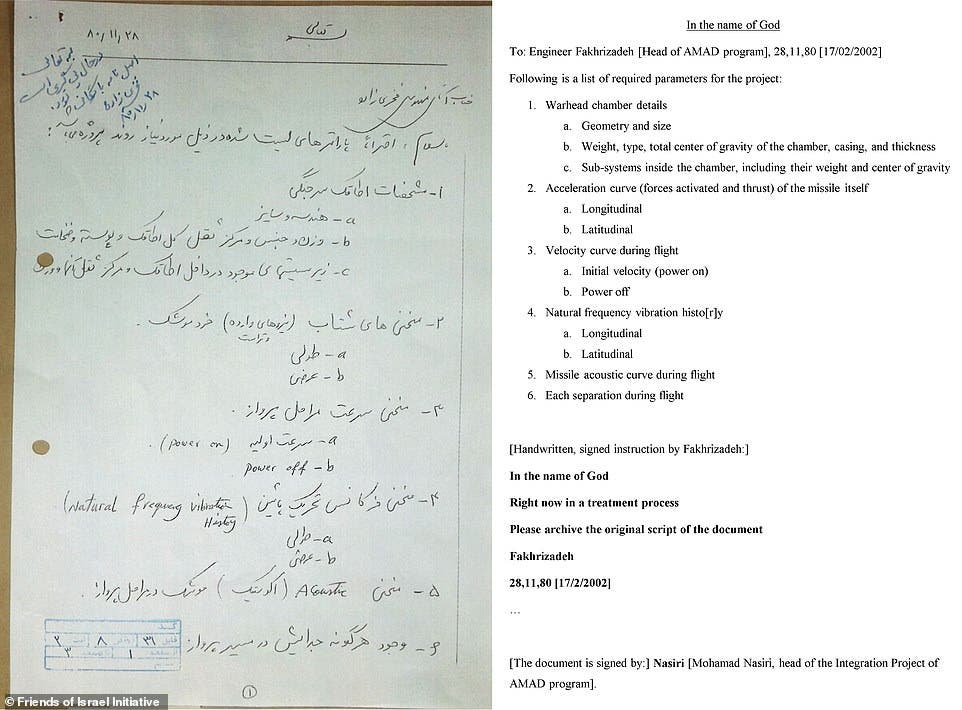 After being 'briefed extensively by Israeli security officials' on the contents of the Iranian archives, the authors of the FOII report write that 'Iran intended to become a fully operational nuclear state'.

They claim that these documents undermine the basis of the 2015 nuclear deal brokered between Iran and the US, UK, France, Germany, Russia and China.

Prior to signing the agreement - formally known as he Joint Comprehensive Plan of Action - the International Atomic Energy Agency reported it had not found 'credible indications of the diversion of nuclear material in connection with the possible military dimensions to Iran's nuclear programme'.

But this was rubbished in an explosive press conference by Israeli Prime Minister Benjamin Netanyahu, whose agents launched a daring raid on a Tehran compound they suspected of hiding their nuclear plans.

In January 2018 successfully extracted a haul of thousands of files from metal safes which Netanyahu said proved Iran had deceived Barack Obama on the extent of its nuclear programme.

The 2015 nuclear deal, which lifted sanctions on Iran, who in turn vowed to limit its nuclear activities and the amount of enriched Uranium it stockpiled.

But after Donald Trump unilaterally pulled out in 2018, the deal now appears to be unravelling.

Earlier this week, the UK, France and Germany said they were triggering the agreement's dispute mechanism after accusing Iran of violating terms of the accords.

Iran batted back the allegations and said the trio were in the pocket of the US President.

In an exclusive interview with MailOnline, chief author of the report Mr Baird, who steered Canada's foreign policy from 2011 to 2015 said Iran was the 'biggest terrorist organisation in the world'.

He also said that, in light of Donald Trump's isolationism and clarity over Brexit, Boris Johnson is best-placed to be the next 'leader of the free world' and spearhead the Western push-back against Iran.

Mr Baird said: 'I cannot tell you how strongly I feel that. This is a moment for Boris Johnson to lead the free world, Angela Merkel became leader of the free world ten years ago. I think Boris has the capacity to provide the Western leadership the world needs.'

Mr Baird, who sensationally closed down the Canadian embassy in Tehran in 2012 and expelled Iranian diplomats from his country, urged UK foreign secretary Dominic Raab to consider the safety of his ambassador Rob Macaire who was temporarily arrested and whose effigy was burned in the street.

He said: 'I would say to him do you feel confident your diplomats are safe in Tehran with this regime?

'We look at the situation after they ransacked your mission, and came to the conclusion "absolutely not".

'When they're burning you an effigy and they regularly ransack diplomatic compounds… I just don’t think you can trust these people to protect diplomats.'