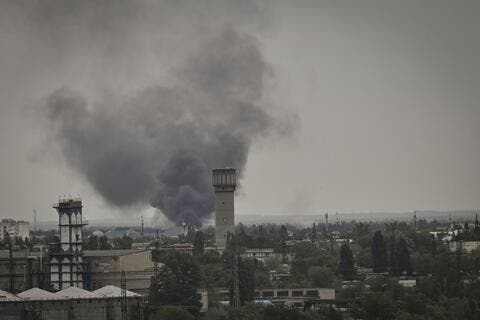 Attack on #Kharkiv today results in 8 Ukrainians killed. One is a 5 months baby

"Today, the enemy has insidiously shelled the city of Kharkiv," he said in a post on Telegram, according to Ukrinform. "Such districts as Shevchenkivskyi, Kyivskyi and Pavlove Pole came under enemy fire. Seven civilians were killed and 17 injured, including a 9-year-old child."

The head of Ukraine's national police said a father and his 5-month-old baby who were walking down the street at the time of the attack were also killed. The baby's mother was injured.

The New York Times reported the attack came as some semblance of normal life had returned to the city, which is located about 25 miles from the Russian border. The city had come under heavy attack in recent weeks, but subways had become operational again Tuesday and some residents had returned.

"Today was my first day back at work after three months sheltering at home," a subway employee, Viktoriya Konyevets, told the Times. "I didn't think it would be like this.

One of the strikes hit the metro stop where Konyevets works in the Shevchenkivskyi district. The subway had been shuttered and repurposed as a bomb shelter prior to this week, The Washington Post reported.

Russian forces also intensified attacks in eastern Ukraine in an attempt to take control of the key city of Severodonetsk, one of the last major cities still held by Ukraine in the Donbas region.

The Washington-based Institute for the Study of War said Wednesday night that Russian forces were likely days away from cutting off supplies to the city, where about 15,000 civilians are located.

"The enemy is trying to encircle our troops," he said on Ukrainian television, according to CNN.

Russian media reported Thursday that its troops captured the city of Lyman in the Donetsk oblast, a major railway hub. Oleksiy Arestovych, an adviser to President Volodymyr Zelensky's chief of staff, said the information has yet to be confirmed.