Published May 12th, 2022 - 12:27 GMT
Priests and friends mourn over the body of veteran Al Jazeera Palestinian journalist Shireen Abu Aqleh (Akleh), who was shot dead as she covered an Israeli army raid on the West Bank's Jenin refugee camp, on May 11, 2022 before her body is transferred for burial. (Photo by JAAFAR ASHTIYEH / AFP)
Highlights
Safadi says Abu Akleh's 'assassination a heinous crime, and a flagrant attack on press freedom'

Foreign Minister Ayman Safadi on Wednesday spoke with Palestinian Foreign Minister Riyad Al Malki over the phone and expressed condolences over the passing of the Palestinian journalist Shireen Abu Akleh, who was shot dead in the West Bank town of Jenin while covering a raid by Israeli occupation forces. 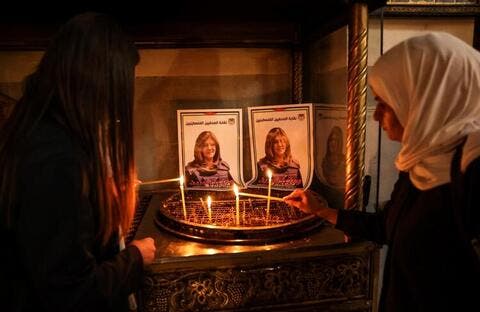 The foreign minister also checked on the health condition of Ali Al Samoudi, another journalist who was injured in the shooting, according to a Foreign Ministry statement.

Both ministers highlighted the necessity of holding perpetrators of this crime accountable.

Shireen Abu Aqleh was Christian Palestinian. Her funeral is taking place on Friday in a church in the Old City if Jerusalem.

Don’t let mainstream media erase that. Don’t let them say she isn’t Palestinian just because she isn’t Muslim. She is and always will be Palestinian.

Safadi called "the assassination a heinous crime, and a flagrant attack on press freedom", calling for launching "a real, transparent and immediate investigation" to hold perpetrators accountable.

In a tweet, Safadi said: "May God bless the soul of the distinguished professional journalist and voice of truth, who reported the suffering of the Palestinians."

He offered his condolences to the victim's family and Al Jazeera channel, and wished Samoudi a speedy recovery.

Also on Wednesday the Foreign Ministry condemned the "assassination" of Abu Akleh as well as the shooting of journalist Ali Al Samoudi.

Foreign Ministry Spokesperson Haitham Abu Al Foul stressed the Kingdom's denouncement of targeting of journalists, emphasising that this "heinous crime flagrantly violated” international humanitarian law as well as the freedoms of press, media and expression, according to a separate ministry statement.

Arab countries at the UN have called for an independent, international probe into what they called the assassination of Al Jazeera journalist Shireen Abu Aqleh.https://t.co/K0skyT9MCC 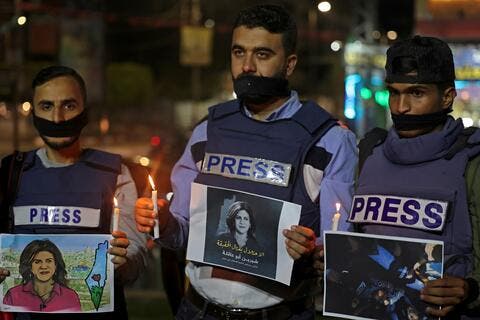 Abu Al Foul also expressed the Kingdom's rejection of violent acts against journalists and targeting them in the occupied Palestinian territories, calling for an immediate and transparent investigation to hold perpetrators of this crime accountable.