Published May 16th, 2022 - 07:17 GMT
Police tape blocks off the scene of a shooting at the Geneva Presbyterian Church on May 15, 2022 in Laguna Woods, California. According to police, the shooting left one person dead, four critically wounded, and one with minor injuries. Mario Tama/Getty Images/AFP

One person was killed and four others were critically injured in a shooting at a California church, authorities said Sunday. 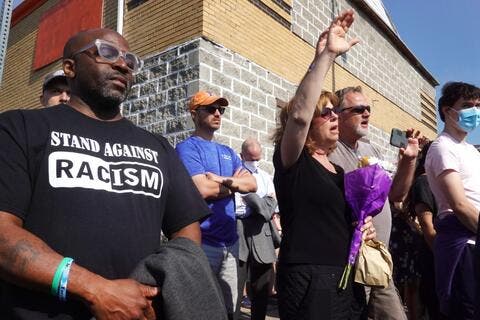 A suspect was detained at the scene of the shooting, which took place at Geneva Presbyterian Church at 1:26 p.m. PDT., the Orange County Sheriff's office said.

NOW - Multiple people shot at a church in Laguna Woods, California. At least 1 one person dead and 4 injured, CBS2 reports. Suspect has been detained.pic.twitter.com/CJ8oHSJn1h

All of the victims in the shooting are adults and the injured victims were transported to hospitals, the sheriff's office added. A fifth person was also treated for minor injuries.

The Orange County Fire Authority said it was on the scene treating victims and transporting patients to hospitals.

FBI agents were also responding to assist the sheriff's department at the scene.

Orange County Sheriff's Department Undersheriff Jeff Hallock told reporters during an evening press conference that the shooting was brought to an end by people at the church who detained the suspected shooter and "hogtied" his legs with an extension cord. They confiscated at least least two firearms from the shooter, he said.

"That group of churchgoers displayed what we believe is exceptional heroism and bravery in intervening to stop the suspect," he said. "They undoubtedly prevented additional injuries and fatalities."

BREAKING: Multiple people have been shot at a church in Laguna Woods in Southern California, authorities said. "We have detained one person and have recovered a weapon that may be involved," the Orange County Sheriff's Department tweeted. https://t.co/UKaRk8td8O

The suspect, who was detained without injury, was identified by Hallock as an Asian man in his 60s. Officers don't believe he is from the area and were working to determine his city of residence and if he has any connection to the church.

"At this time we do not what the suspect's motive may be or whether he had an intended target or whether this is even a hate-related incident," he said.

"No one should have to fear going to their place of worship," he said. "Our thoughts are with the victims, community, and all those impacted by this tragic event."

The shooting comes just a day after a mass shooting in Buffalo, N.Y., on Saturday in which gunman Payton Gendron, 18, was arrested and charged with first-degree murder for fatally shooting 10 people.