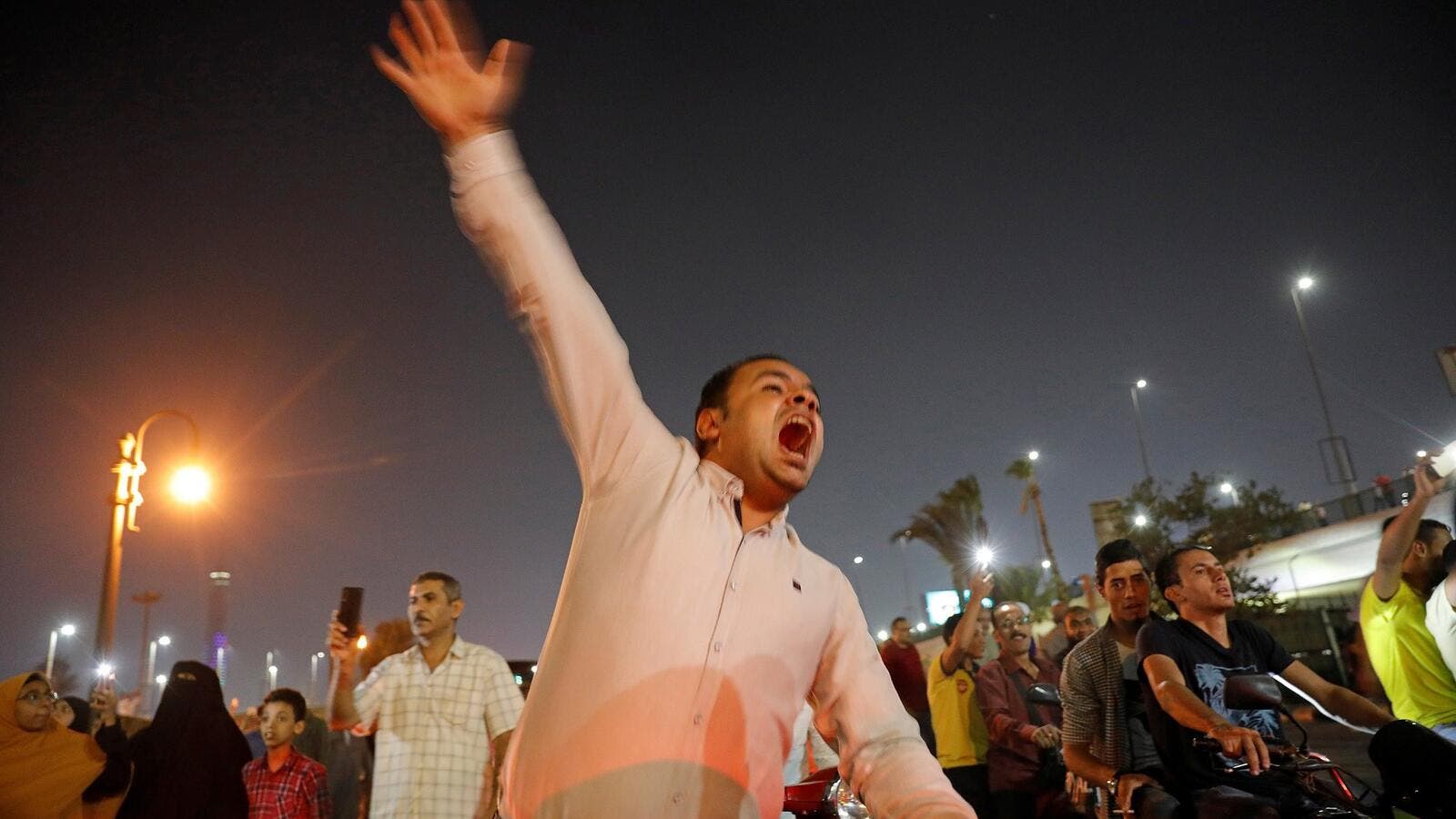 Protests in Egypt (Twitter)
Highlights
Sisi's government plans to gather thousands of the president's supporters together in a mass rally on Friday to counter the demonstration.

The son of Egyptian President Abdel Fattah al-Sisi has secretly launched a plan to quash protests against his father's rule, insider sources say.

Mahmoud al-Sisi, a security offical, has held several meetings with high-profile businessmen and media bigwigs in an attempt to create a public groundswell in support for his father.

The president has faced a tough September as viral allegations of endemic corruption in his regime sparked growing dissent and the ultimate eruption of rare protests calling for his ousting last week.

The man whose videos drove outrage over corruption, former government contractor Mohamed Ali, has called for a "million-man" protest calling for Sisi's overthrow on Friday.

That call has been endorsed by now-detained members of the opposition Independence Party and thousands of Egyptians online.

Sisi's government plans to gather thousands of the president's supporters together in a mass rally on Friday to counter the demonstration.

Mahmoud Sisi has met with prominent businessmen and members of parliament to gather support for the rally, sources told The New Arab's Arabic service.

The president's son appeared "extremely angry" in the meetings, insiders said, but assured those attending that the protests would eventually end and that those who had shown support to the government would be "appreciated".

Dozens of MPs and businessmen have already urged prominent families in their districts to mobilise people to attend the rally, sources said, as well as contracting slum dwellers to attend in return for money.

Many of the prominent figures involved will reportedly provide free transport, food and even money to swell the numbers at the rally.

Others have reportedly begun plans to mobilise pro-Sisi rallies in other cities across Egypt on Thursday and Friday.

Mahmoud Sisi has also reprimanded Egypt's Interior Minister for what he described as the security services' "lax" approach to demonstrations last week.

While Egypt has launched a mass arrest campaign since the protests broke out on Friday, detaining around 1,300 people so far, the immediate reaction of the police to demonstrations was considered soft in comparison to previous protests, with the security service utilising tear gas and limited arrests to drive off the demonstrators.

The security response will be intensified, with additional officers deployed around Cairo's central Tahrir Square on Thursday, Friday and Saturday this week in anticipation of demonstrations.

Sisi's son has also met with key figures in Egyptian media to disseminate a new editorial line regarding the protests.

The media will now focus on the supposed link between Sisi's absence and chaos in the country, sources said.

Egyptian media will tell readers and viewers that an Egypt without Sisi will mean a complete security collapse. To furnish that view, television stations will use footage from 2011 and 2012 and link scenes of looting and violence to the outlawed Muslim Brotherhood.

But the new editorial line will also promise a new period for Egypt under Sisi which will supposedly include the release of detainees from prison and a more reconciliatory approach with opposition parties.

According to high-level sources, some within Sisi's regime have advocated for the implementation of political reforms, but both Sisi and the head of Egypt's feared security services argued against such measures, claiming that such an immediate response would appear as a concession for protesters.

Instead, the government has reportedly agreed upon a package of economic reforms to be implemented in the near future, which will mostly be geared towards alleviating the high cost of basic goods.