Published May 7th, 2022 - 06:25 GMT
A demonstrator rinses his face with water after police fired tear gas canister to disperse university students protesting to demand the resignation of Sri Lanka's President Gotabaya Rajapaksa over the country's crippling economic crisis, near the parliament building in Colombo on May 6, 2022. (Photo by ISHARA S. KODIKARA / AFP)
Highlights
Move gives sweeping powers to security forces second time in 5 weeks to deal with anti-government protests

President of Sri Lanka Gotabaya Rajapaksa on Friday declared a state of emergency once again as the nationwide protests against economic woes continued to hit the island nation. 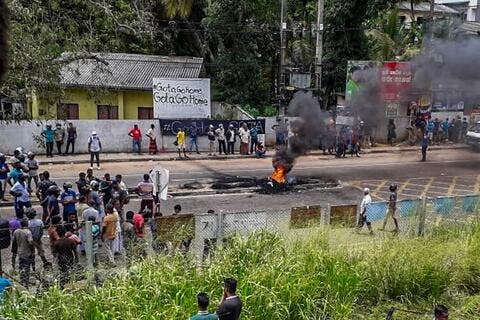 One Killed, 12 Injured in Sri Lanka as Police Shoot Protestors

Quoting Rajapaksa, Indian private TV channel NDTV reported that the state of emergency would be in effect as of midnight.

“The measure will give security forces sweeping powers for the second time in five weeks to deal with escalating anti-government protests,” reports said.

Sri Lanka Under State Of Emergency Again Amid Its Worst Economic Crisis https://t.co/WebFlFzFQi

The decision came after the police forces tried to stop students attempting to storm the country's parliament with tear gas and water cannon, the report said, adding Sri Lanka was "brought to a halt by a trade union strike demanding the government to step down”.

In protest against the economic crisis looming over the country and long power cuts, the protesters had gathered around the residence of the president in late March.

The following brawl between the protesters and security forces led to the injury of dozens of civilians as well as police officers, and more than 50 people were arrested.

The government imposed a curfew in the capital Colombo to put an end to the anti-government protests, and launched the first state of emergency on April 1, with Rajapaksa referring to the protests as “terror acts”.

Although the state of emergency was revoked on April 5, the protests persisted in the country, which is home to a population of some 22 million people and has been facing one of the most severe economic crises in its history.