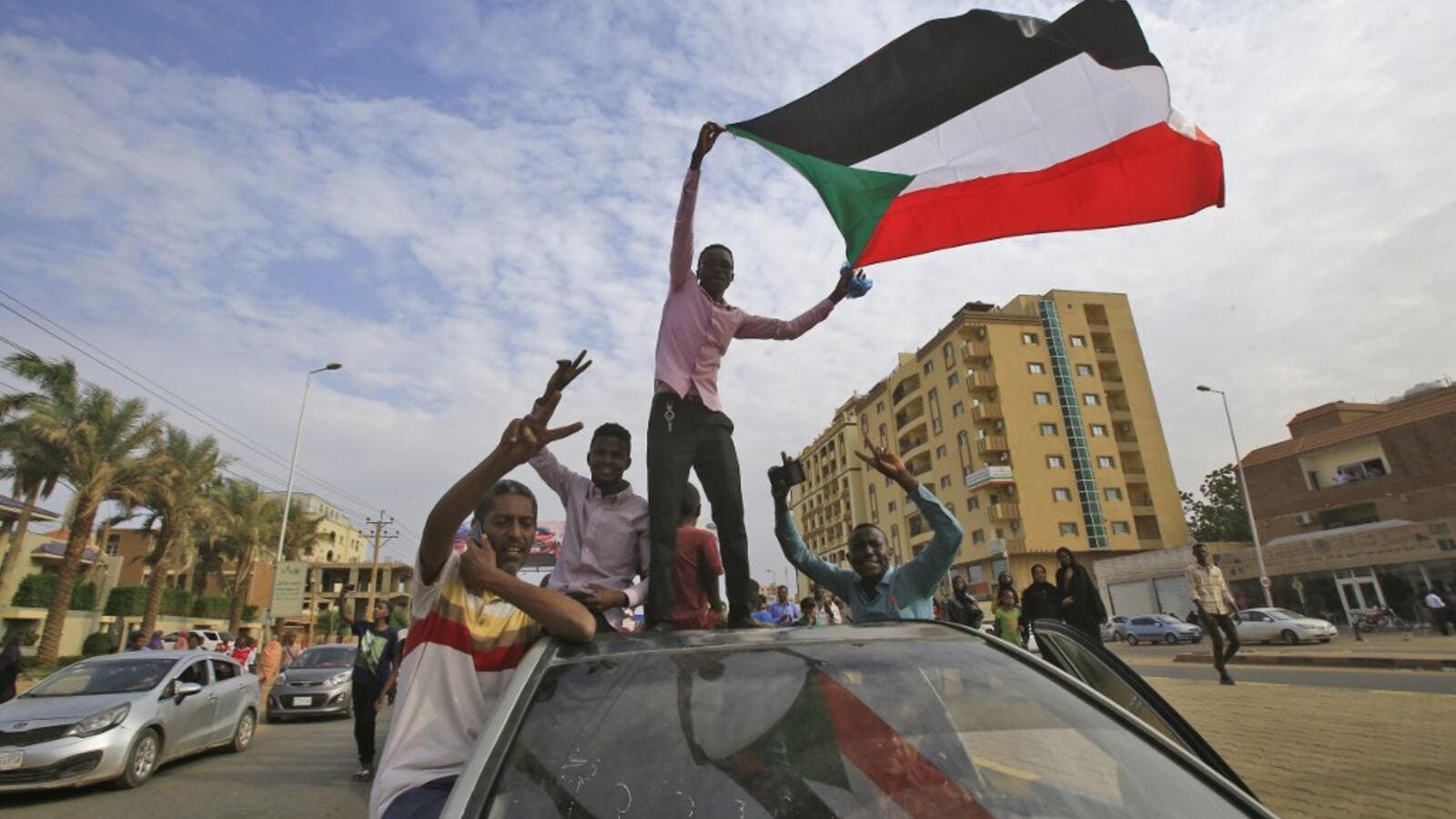 Sudanese protesters wave their national flag during a demonstration called for by the Sudanese Professionals Association (SPA) to denounce the July 29 Al-Obeid killings, in the capital Khartoum on August 1, 2019. (AFP/ File Photo)
Highlights
A civilian-military ruling body is now tasked with steering the country through a three-year transition period.

Sudan received one-and-a-half billion dollars from Saudi Arabia and the United Arab Emirates on Monday, half of what was promised by the Gulf countries after the ouster of former president Omar al-Bashir.

The other half of the three billion in aid is expected to be paid by the end of next year, Reuters reported.

"I met with the ambassadors of the kingdom and of the UAE, and we agreed on a programmed schedule that will God willing take us to the end of 2020, to finish off the rest of the grant," Elbadawi added.

He announced a nine month rescue plan for Sudan in September that aims to alleviate rampant inflation while maintaining supply of basic goods. It is effectively a lifeline as Sudan's new government struggles to provide its citizens with bread and fuel.

Cuts to Sudan's bread and fuel subsidies last year was one of the main economic triggers behind the eruption in December of protests that led to the ousting of Bashir.

The minister spoke at the sidelines of an event in Abu Dhabi, where Sudan’s Prime Minister Abdullah Hamdouk is visiting after having travelled to Riyadh on Sunday.

Hamdouk travelled to Saudi Arabia with General Abdul Fattah al-Burhan in the first such visit to the kingdom since taking office in August.

The two leaders met with the king who renewed his backing for Sudan's stability and prosperity, the official Saudi news agency SPA reported.

Sudan has embarked on a transition to civilian rule following a power-sharing deal signed on August 17 by protest leaders and the generals who ousted Omar al-Bashir.

A civilian-military ruling body is now tasked with steering the country through a three-year transition period.

Before Bashir's ouster, Sudan had played a key role in supporting the regional interests of Saudi Arabia and its allies, with the autocrat overseeing a major foreign policy shift that saw Khartoum break its decades-old ties with Iran.

Sudanese opposition figures have called on their country's transitional government to bring back Sudanese soldiers fighting for the Saudi-led coalition in Yemen, including child soldiers and mercenaries, according to a report published last month.

At any time in the past four and a half years, as many as 14,000 Sudanese militiamen were fighting in Yemen with local militia aligned with the Saudis, according to an Al Jazeera report. Many of these, the report adds, were children and mercenaries.

The decision to join the Saudi-led war against Houthis in Yemen was made by former dictator Omar al-Bashir, whose current trial revealed he received millions in illicit cash funds from Saudi Crown Prince Mohammed bin Salman.

In December, The New York Times reported that Riyadh offered impoverished Sudanese families up to $10,000 to send their children to fight in Yemen.

The report said that children made up at least 20 percent - and sometimes 40 percent - of the Sudanese battalion in Yemen.

Sudan returned to the international stage last month when Hamdok visited the US and France to address the United Nations General Assembly and meet with French President Emmanuel Macron.

The Sudanese premier has also held key talks with rebel leaders in the South Sudanese capital Juba and Paris.

Among the transitional government's key goals are an end to conflict in the country and a solution for Sudan's ailing economy.

Hamdok seeks to acquire billions in financial aid to help shore up the country's finances but Sudan is currently blocked from receiving World Bank and International Monetary Fund assistance due to its continued listing on the US State Sponsors of Terrorism list.