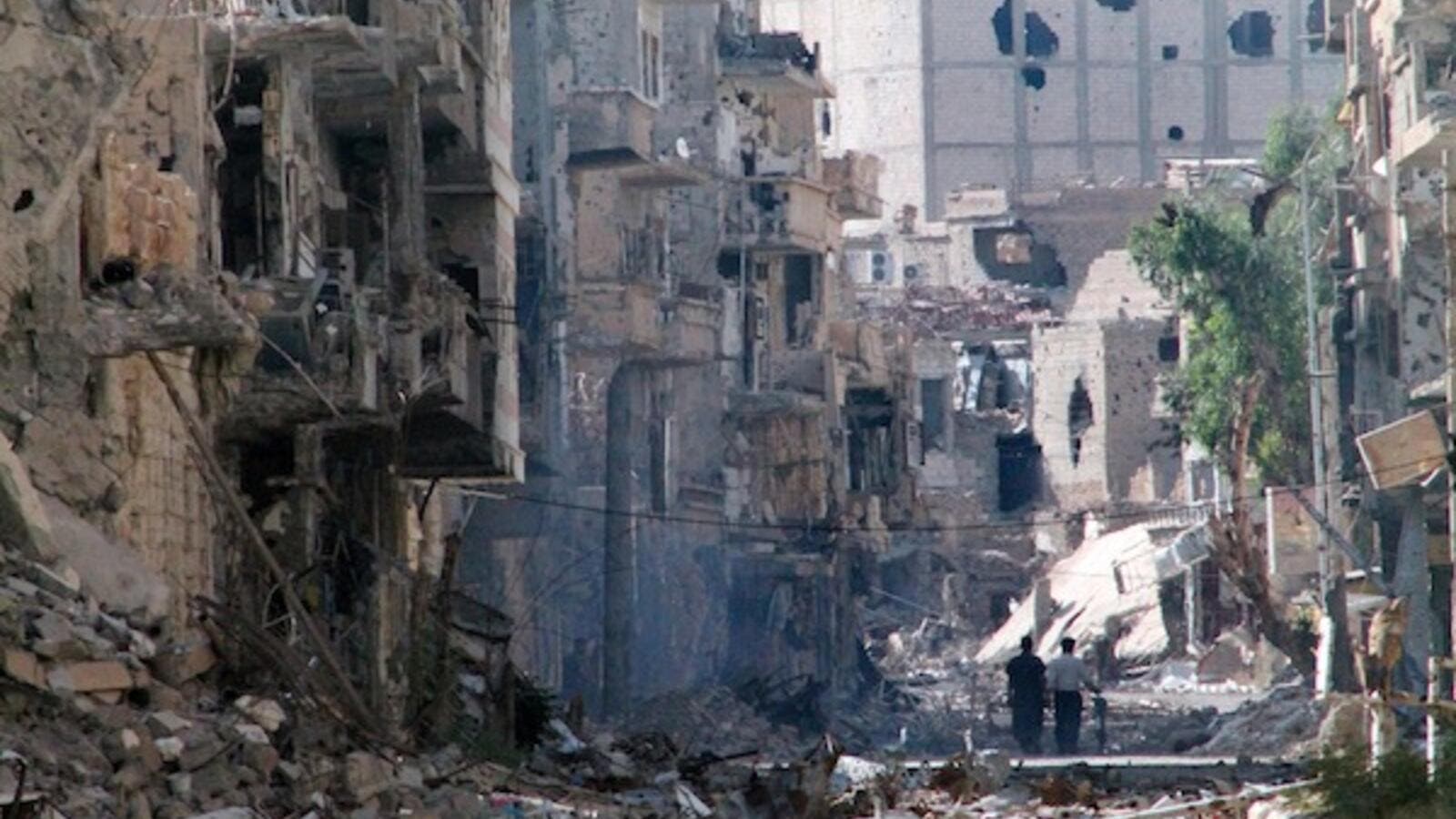 Syrians walk down a destroyed street in the centre of Syria's northeastern city of Deir Ezzor on Thursday. The central city of Homs has been under a fierce aerial bombardment from regime forces, according to the Syrian Observatory for Human Rights. (AFP)

The Syrian army launched an aerial bombardment on the central city of Homs on Sunday and killed three civilians as regime forces redouble their efforts to secure rebel-controlled districts, activists said.

"Syrian warplanes carried out air strikes on the Old City of Homs a little while ago, destroying a house and causing three deaths," the Syrian Observatory for Human Rights told AFP.

"Regime forces also carried out heavy shelling of the districts of Khaldiyeh and the Old City, and the sound of explosions could be heard," the group noted.

According to the Observatory, which uses a network of professionals inside Syria for its information, at least three civilians, a woman and two children, were killed during regime airstrike targeting the Old City. Since the government forces began their offensive on Sunday morning, dozens of people had been injured, the Observatory source told AFP.

"The army is continuing its attempt to enter Khaldiyeh, but it hasn't succeeded so far," Rami Abdel Rahman told the agency.

Sunday's developments follow "unprecedented" moves by the Syrian army to reclaim areas in Homs that are controlled by rebels. the Observatory added, amid reports that the army was moving in on Khaldiyeh, Bab Hud, Hamidiyeh and Bustan al-Diwan in the central Homs district.

"Military operations never stopped in Homs, but their pace increases according to priorities," a Damascene security source told Agence France Presse on Saturday.

"What's important is to cleanse those neighbourhoods of Homs that are in the hands of armed terrorists, particularly Khaldiyeh, Hamidiyeh and the Old City," he added.

The Syrian daily Al Watan, which is close to the government, reported Sunday that forces loyal to Syrian President Bashar Assad had "made qualitative new advances in the city of Homs amid fierce clashes with armed militias in Khalidiyeh and Bab Hud," according to AFP.

The regime's attention to Homs prompted the Syrian National Coalition, the key government opposition group, to urge "battalions of the Free Syrian Army to come to the aid of Homs with all means possible," according to AFP.

The coalition also reissued calls to the international community to establish a no-fly zone over Syria and to attack regime military bases.

Homs is the third largest city in Syria and was one of the first in the country to move against Assad in the early days of the war more than two years ago.

Khaldiyeh and the Old City have been under siege by the army for around a year, according to AFP.