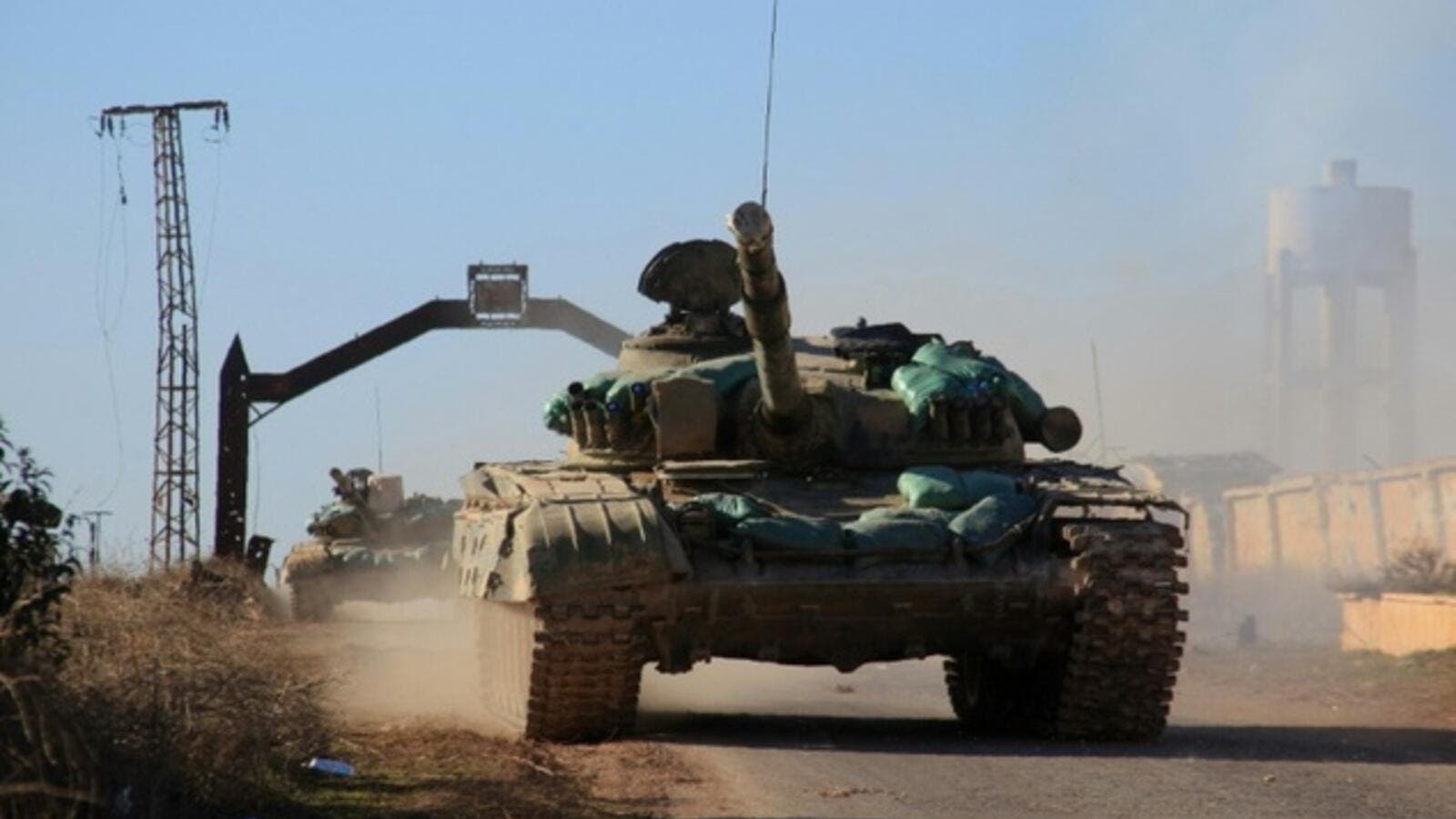 Syrian government forces in the village of Tal Jabin, north of the embattled city of Aleppo, as they advanced to break a three-year rebel siege of two government-held Shia villages, Nubol and Zahraa, on February 3, 2016. (AFP/George Ourfalian)

The Syrian military cut off rebel supply lines from Turkey into Aleppo last week, setting the stage for a potentially costly siege, while similar circumstances played out in Fallujah, Iraq, UPI reports.

Syria's state news agency, SANA, reported government troops killed scores of militants, mainly from al-Qaeda's Nusra Front, while breaking into the towns of Nubbul and al-Zahra in the north of the province. Pro-Assad forces also managed to cut off rebel supply lines leading from Turkey into to the nearby town of Mayer.

"It feels like a siege of Aleppo is about to begin," he told CNN.

The government advances and Russian airstrikes prompted tens of thousands of residents in Syria's largest city to flee for the Turkish border.

Turkish Prime Minister Ahmet Davutoglu said Friday at least 70,000 people could be headed toward the border, while activists with the Syrian Observatory for Human Rights put the number around 40,000 -- the same figure provided by the United Nations Office for the Coordination of Humanitarian Affairs.

Turkish officials in the border town of Kilis said about 35,000 refugees had arrived there by Saturday.

More than 320,000 civilians are believed to be living in rebel-held areas of Aleppo City.

Internationally mediated peace talks between the Syrian government and opposition in Geneva broke down the same day pro-Assad forces recaptured Nubbul and al-Zahra. U.N. officials hope to restart the talks by at least Feb. 25.

"It is difficult in the extreme to see how strikes against civilian targets contribute in any way to the peace process now being explored," the BBC quoted U.S. State Department spokesman John Kirby as saying, while NATO Secretary-General Jens Stoltenberg said Russian airstrikes were "undermining efforts to find a political solution to this conflict."

On Monday, the Russian defense ministry released figures for the prior week of airstrikes, saying it conducted 468 sorties against 1,354 militant "infrastructural facilities" in the Aleppo, Latakia, Hama, Homs, Damascus, Raqqa, Daraa and Deir Ezzor provinces -- including against a coordinated Daesh car bomb and infantry attack on government forces at the Deir Ezzor airport.

Moscow has asserted it will not cease air operations in Syria until groups such as Daesh and Nusra Front are destroyed.

While Aleppo has been home to several militant groups considered moderate, Nusra Front has reportedly issued a call to arms in the city.

SOHR reported Wednesday the al-Qaeda affiliate had ferried up to 750 rebel fighters in a 200-vehicle convoy to confront regime troops in the town of Ratyan, just southeast of Nubbul, al-Zahra and Mayer in northern Aleppo province. By Friday, the militants had reportedly recaptured the western section of the town.

Fighting continued in the province on Sunday, as rebels clashed with pro-Assad forces near Khan Toman, which the rebels captured early last month, and Daesh forces battled government troops near Sheikh Ahmed, a town located in the vicinity of the Kuwairis air base. The air base was freed from an Daesh siege in November.

The battlefield developments came as Sunni Arab Gulf states such as Saudi Arabia and the United Arab Emirates, which back the Sunni-dominated opposition, said they were willing to join ground operations in the U.S.-led coalition effort against Daesh in Syria.

In the grinding back-and-forth stalemate of Syria's five-year civil war, siege tactics have come to the fore.

Russia's intervention last September has enabled the Syrian military to break a series of rebel sieges -- including at the Kuwairis air base last year and more recently in the towns of Nubbul and al-Zahra -- while imposing its own in places such as Aleppo City and the mountain town of Madaya, near Damascus.

Meanwhile, regime troops are still battling toward the rebel-besieged villages of Kefraya and Foah in Idlib province, and Daesh forces are besieging several government-held neighborhoods in the city of Deir Ezzor.

Siege tactics call for an attacking force to surround and starve a defending force that is holding an objective deemed too costly to capture by direct assault. Activists say scores of Syrian civilians have died of malnutrition in besieged areas such as Madaya, despite agreements last month to allow humanitarian aid into the town.

Opposition negotiators in Geneva last week refused to begin talks with the Syrian government unless certain preconditions were met, including the opening of humanitarian corridors to besieged areas. However, last week's Aleppo offensive, while ending two rebel sieges, heralded the beginning of a larger humanitarian crisis in Aleppo City.

Syrian government negotiator Bashar al-Jaafari said Tuesday his delegation did not come to Geneva with preconditions and would not accept any. He added on Wednesday the preparatory phase for the talks would take "a much longer time" than anticipated.

Riad Hibjab, coordinator for the Syrian opposition's High Negotiations Committee, said Thursday his delegation would leave Geneva and not return until they could "see changes on the ground."

Still, following his announcement the talks would be suspended until Feb. 25, U.N. Syria envoy Staffan de Mistura expressed hope they would resume "much earlier."

Meanwhile, a U.S. presidential envoy visited northern Syria on the weekend of Jan. 30 and Jan. 31 to speak with Kurdish rebel forces left out of the Geneva talks.

Turkey, a NATO ally and member of the U.S.-led coalition against IS, considers the Kurdish Democratic Union Party, or PYD, to be a terrorist organization.

However, the PYD's main combat arm, the Kurdish People's Protection Units, or YPG, is a key U.S. ally on the ground against Daesh forces in Syria. The YPG is part of a wider coalition known as the Syrian Democratic Forces, which also includes Arab and Assyrian rebel cells fighting Daesh in the al-Hasakah province and around the militants' self-declared capital of Raqqa.

"The Syrian Democratic Forces have made dramatic gains against [Daesh] in northern and eastern Syria," Army Lt. Gen. Sean MacFarland, head of the coalition effort against Daesh, said Monday, adding the group would "not have been able to do any of that without coalition air support."

Saleh Muslim, head of the PYD, reportedly showed up in Geneva anyway but was discreetly asked to leave by U.S. officials after Turkey threatened to derail the negotiations if he was allowed to remain in town.

Brett McGurk, President Barack Obama's special envoy to the anti-Daesh coalition, said in a series of tweets Monday that he had visited the Kurds in Kobani, which was recaptured from Daesh in a months-long battle more than a year ago.

SOHR quoted a Kurdish official as saying McGurk promised any new constitution would respect the rights of Syria's Kurds, and the main objective of the Geneva talks was to facilitate a cease-fire between the main opposition and the Assad government.

The PYD would take part in the next round of talks, the official quoted McGurk as saying.

Prior to the assault on neighboring Ramadi late last year, security forces surrounded the town as U.S. airstrikes pounded militant positions. A similar scenario may be playing out in Fallujah, where basic necessities such as food and medical supplies are running out.

In a phone interview Thursday with Al Jazeera, a resident trapped in the city said a 110-pound bag of wheat costs about $900, and that some people were selling their cars to feed their families.

"Last month, 10 people died for the lack of insulin," the man said.

The siege comes as the Iraqi military continues battling Daesh militants in Ramadi despite statements by the Baghdad government that its forces control 95 percent of the city.

The killings coincided with reports that Daesh also executed more than 300 police officers, soldiers and civil activists in Mosul, to the north in Nineveh province.

On Wednesday, Iraqi security forces, including Shia fighters with the Hashid Shaabi and Kurdish troops with the Peshmerga, reportedly captured three Daesh-held villages south of Mosul and killed 18 Daesh fighters over the prior two days.

Meanwhile, bomb attacks caused dozens of casualties in the Iraqi capital on Thursday. A blast killed one person and injured nine others in the Nahrawan area to the southeast, and an explosion in the Rasheed area of southern Baghdad killed two people and injured another nine. Another bombing killed a similar number of people in the al-Siha neighborhood.

The attacks came as Iraqi security forces reportedly began construction on a 186-mile wall around the capital in a bid to thwart Daesh infiltration and car bomb attacks.

Following recent hard-won successes, the Iraqi military and its coalition allies seek to expel Daesh forces from large urban strongholds such as Fallujah and Mosul. Siege tactics like those seen in Ramadi will likely dominate the early phases, while a ground assault supported by U.S. airstrikes will follow.

Like the city of Raqqa in Syria, the main objective of coalition forces in Iraq is Mosul. Speaking last month with top military leaders at U.S. Central Command in Tampa, Fla., U.S. Secretary of Defense Ashton Carter indicated a strategy calling for Peshmerga forces to push in from the north and east of Mosul while the Iraqi military assaults from the south. Coalition warplanes will provide air support.

According to CENTCOM, coalition forces have trained more than 17,500 Iraqi soldiers and about 2,000 police over the past year.

"The Iraqi security forces have been rebuilt into a force capable of defeating the type of enemy we are now facing," Lt. Gen. MacFarland said Monday. "We have shifted from a pure counterinsurgency focus and are now preparing the [Iraqi security forces] to conduct what we refer to as combined arms operations."

But the Iraqi government has not responded to a U.S. offer for more support in the Mosul operation -- including the possibility of more U.S. forces on the ground.

Phillip Smyth, an adjunct fellow with the Washington Institute for Near East Policy, notes several factions in the Shia-dominated Baghdad government are heavily influenced by neighboring Iran, which also supports the Iraqi military but opposes an expansion of U.S. forces in the country.

"The Iraqis want to keep it up in the air because they don't want to anger Tehran or [Washington,] D.C.," he told Military Times. "The pressure coming out of Tehran is very publicly: 'Do not take their aid. Do not take their support.'"