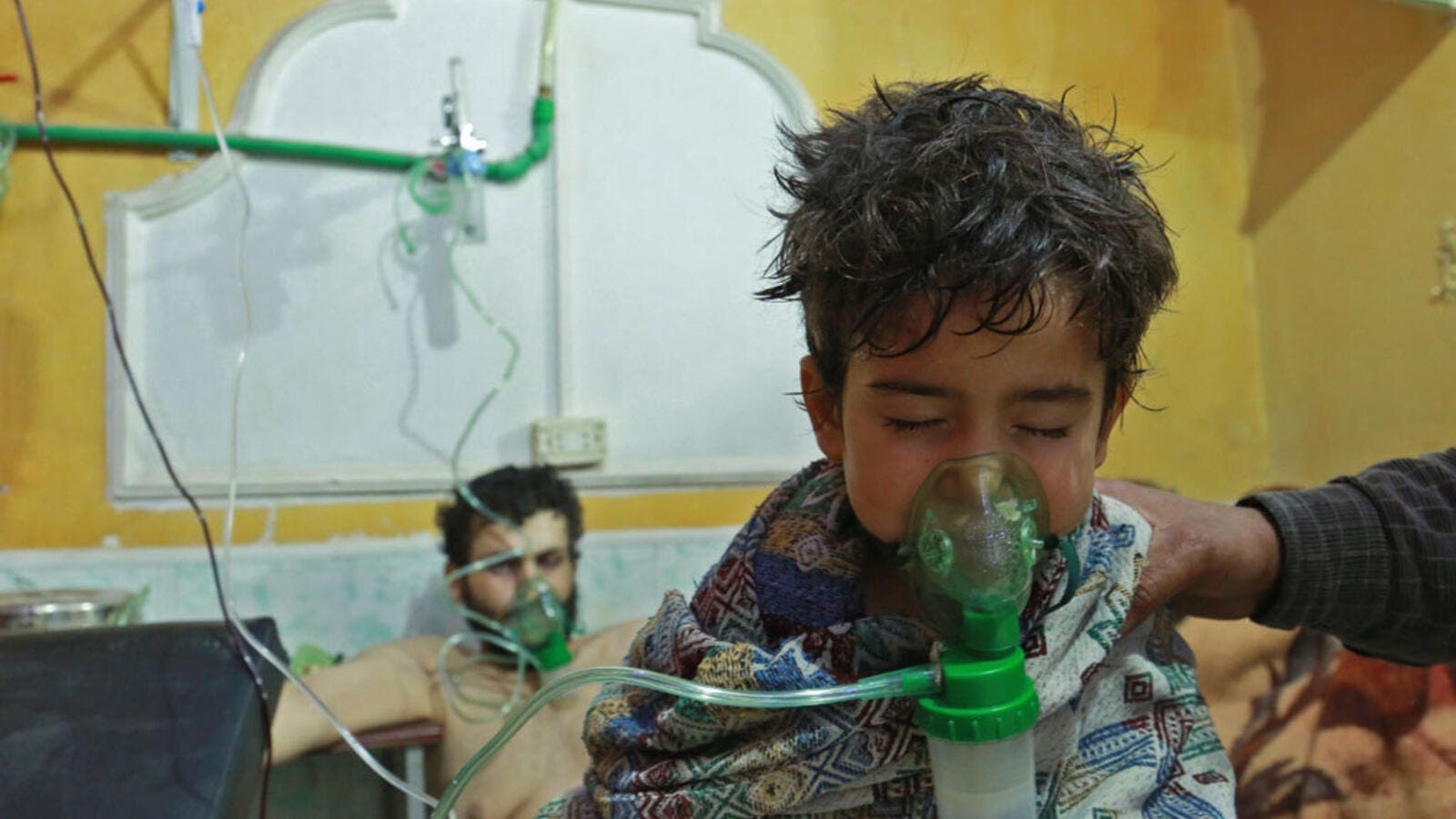 Victims of a chemical weapons attack by the Assad regime in Syria (Photo: HAMZA AL-AJWEH/AFP/Getty Images)
Highlights
Syrians on Wednesday commemorated the sixth anniversary of the deadly Ghouta chemical massacre, which killed hundreds of people in August 2013.

As war raged in Idlib province, the last military stronghold of the Syrian opposition, and 3 million people faced an uncertain fate, Syrians on Monday took to social media to remember the sixth anniversary of the 2013 Ghouta chemical massacre.

On 21 August 2013, dozens of rockets carrying weapons-grade sarin gas, fired by the Bashar al-Assad regime, landed in the then-opposition controlled area of Ghouta which surrounds the Syrian capital Damascus.

The rockets which landed on the towns of Moadamiyeh, to the west of Damascus and Ain Terma, to the east, killed an estimated 1,338 people.

Despite the regime's attempt to portray the attacks as a "false flag" operation, investigations by the UN and human rights indicated that the Assad regime was responsible, based on the type and amount of sarin chemical agent used and the trajectory of the rockets.

International outrage resulted in the UN's Organisation for the Prohibition of Chemical Weapons (OPCW) confiscating most of the regime's sarin stockpile, but it continued to use conventional weapons and chlorine gas against civilian targets with little response from the international community.

The regime again used in the April 2017 and April 2018 against civilians in Khan Sheikhoun and Douma.

Today, as the Assad regime seems to be gaining the upper hand in the war and the world pays less attention to war, many Syrians feel the world has forgotten the events of August 2013.

In 2018, the Assad regime captured Ghouta from the opposition - and in August of - activists reported that the regime had dug up the graves of chemical attack victims in Douma and Irbin and transported their remains to an unknown location.

Sama Kiki, a programme director at Dawlaty, an organisation which works to preserve Syrian memory, spoke to The New Arab about the event.

"The Syrian regime, today, can go to Ghouta and erase the evidence of its crime, and deny that the whole chemical attack took place," she said.

"But on the other hand the memory of the Syrians who lived through the siege of Ghouta and the chemical attack speaks of every detail which accompanied the attack and its effect, the death, the change in the composition of the air, the sound of the insects and their appearance before they died, and the confusion about whether to run to the rooftops to breathe pure air or to hide in the cellars for shelter. It's impossible to erase these horrific and well-documented crimes from the memory of Syrians."

Batool Abdulkareem, a Syrian doctor and activist living in the UK said that despite the international uproar the regime's slaughter has not ended.

"It has been six years since the chemical massacre of Ghouta and although no recent chemical attacks have been reported the killing machine of the Assad regime and the Russian forces has not stopped. Over 600 civilians including 157 children were killed between April and July this year. The UK government and the international community should respond to hospital bombing like they do to chemical attacks," she said.

"There was strong response to the 2017 chemical attack on Khan Sheikhoun, but if hospital targeting is not stopped and Assad's air force is not grounded, nothing is going to stop the barrel bombs killing and maiming Syrian children and innocent civilians in Idlib."

More than 500,000 people have been killed in the Syrian conflict, mostly as a result of regime bombardment of civilian areas.

The targeting of hospitals, which provide essential services in opposition-held areas, has been a frequent tactic of the regime, with the UN reporting that at least 23 hospitals and medical facilities had been hit in the regime's current campaign against Idlib province.