'They Should All Go!' Algeria's Democracy Movement Struggles Against an Uncertain Future

If ‘The People Demand the Fall of the Regime’ proved the rallying cry of the momentous events of 2011 in the Arab World, a chant heard on the streets of Algeria since February proves apposite to our present moment: ‘They Should All Go!’. The phrase neatly encapsulates the demands of demonstrators as peaceful, popular movements continue in Lebanon, Iraq and across North Africa.

In Algiers, just as in Basra and Beirut, protesters demand not superficial changes at the top, but a radical change in how politics is organised, a systematic rout of a compromised political elite.

In this context, Algeria’s civil and military elites’ decision to solve an acute crisis of legitimacy by holding elections last week fell far short of the mark. Even before the results of Friday’s Presidential elections had been announced, thousands took to the streets to call for real change, denouncing the vote as a charade. Algerians rightly saw elections as renewing rather than transforming a corrupt system and voter turnout reflected their dissatisfaction.

Algerians rightly saw elections as renewing rather than transforming a corrupt system and voter turnout reflected their dissatisfaction.

Though official figures state that turnout stood at just over 41%, many pundits suggest that even this dismally low rate is artificially inflated. Of the 5 candidates running for election, 4 were former ministers and 2 had held the Prime Ministerial post during the 20 year-long rule of ousted former President Abdelaziz Bouteflika. The eventual victor, the 74-year-old former Prime Minister Abdelmajid Tebboune, claimed 58.1% of the vote, beating out his closest rival Abdelkader Bengrina. His election will inspire little confidence amongst the hirak, Algeria’s leaderless pro-democracy movement which called for a boycott of last week’s election.

President-elect Tebboune has sought to distance himself from ‘the gang’, the circle of oligarchs, politicians and military officials associated with Mr Bouteflika’s long years of rule, yet his own service in that period and his closeness to the increasingly unpopular Chief of Staff of the Army General Ahmed Gaid Salah. Mr Salah, who is increasingly seen as the chief power broker in the country’s de-facto ruling military junta referred to those calling for a boycott ‘traitors’ and servants of foreign powers, but such familiar accusations will likely prove ineffectual. In reality, Algeria’s legitimacy crisis has only deteriorated since the announcement of election results.

Algeria’s legitimacy crisis has only deteriorated since the announcement of election results.

The tasks ahead of Mr Tebboune are daunting. Though he has offered to ‘extend a hand’ to protestors and engage in ‘dialogue to build a new Algeria’, that is no straight-forward task. Though Mr Tebboune has already promised to free the roughly 200 demonstrators and political opposition figures incarcerated since June, fostering dialogue will prove difficult with an officially leaderless and loosely organised movement.

As Zine Labidine Ghebouli, an Algerian political analyst, notes ‘having a dialogue with the protest movement is certainly not possible unless this movement organises itself.' Though temptations will exist on the part of Mr Tebboune to engage in superficial conversations with certain identifiable figures within the Hirak, this will do little to solve the problem.

As Mr Ghebouli argues, such figures will immediately be rejected and distanced from the movement on the street. A real dialogue will only occur if ‘Tebboune and the military junta allow the movement more space, freedom and time to be able to organise itself.’ Yet time is short for Algeria’s civil authorities who face resistance not only on the street but in the barracks too. The military, long a revered institution in Algeria given its association with the struggle for independence and defence of the revolution, has come to play a far more overt role in the nation’s politics in recent months.

The military, long a revered institution in Algeria given its association with the struggle for independence and defence of the revolution, has come to play a far more overt role in the nation’s politics in recent months.

Though the military, and its leader Mr Salah have been increasingly criticised in recent months, given their influence, any future dialogue will likely involve promises to safeguard their own set of interests. Mr Tebboune, in the best-case scenario, will have to walk a delicate tightrope to balance the demands of his military allies with the demands of an increasingly assertive protest movement. 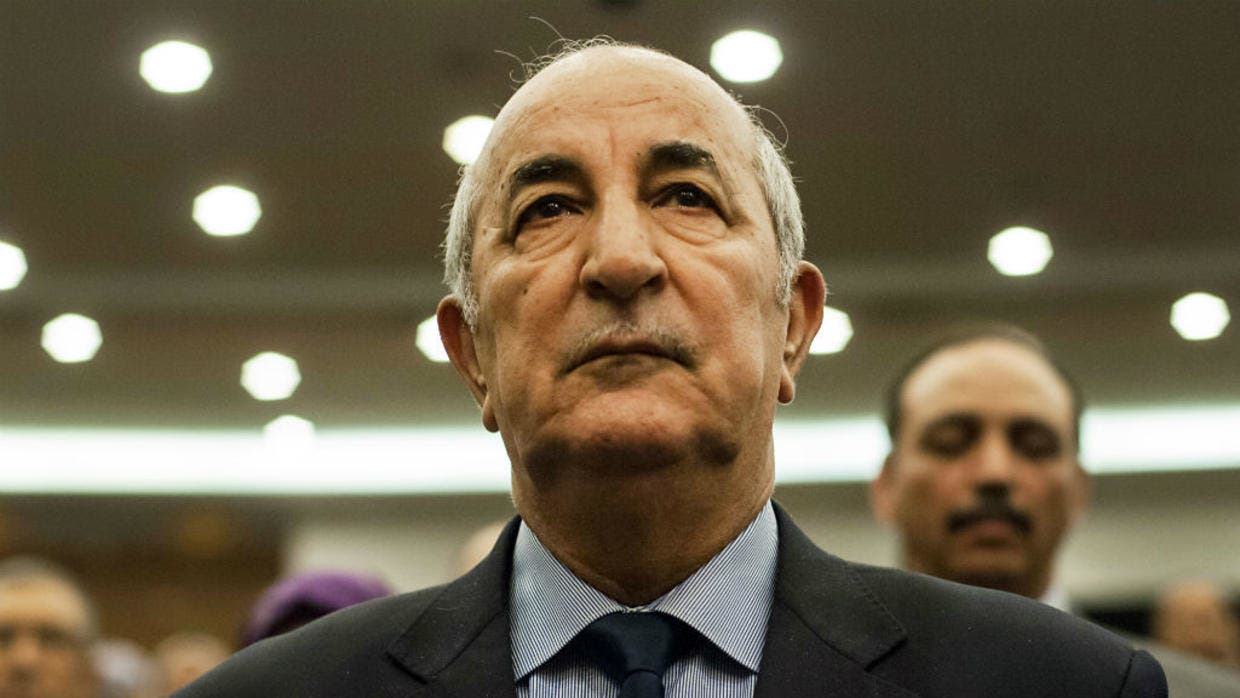 Mr Tebboune, like his beleaguered compatriots in Beirut and Baghdad must also face down a severe economic crisis. Algeria’s hydrocarbon based economy has struggled with recent price drops and fluctuations. Government efforts at diversification have reached a dead end, austerity politics has proven increasingly unpopular, unemployment is increasing, and exchange reserves are depleted.

As Mr Ghebouli argues, Algeria’s government must undertake ‘deeply needed structural economic reforms’ to weather the crisis it finds itself in, including a ‘complete diversification of the Algerian economy and a reconsideration of the country’s socioeconomic “welfare” system’. Yet a weakness of governmental legitimacy will make bold economic decision making difficult. Where vested interest groups oppose reform, Mr Tebboune will be forced to alienate some to keep others onside.

Mr Tebboune, like his beleaguered compatriots in Beirut and Baghdad must also face down a severe economic crisis.

Algeria’s demonstrators have long complained that their movement has garnered less international attention than comparable shows of people power elsewhere in the region. Yet the world’s eyes should stay firmly on Algeria’s uncertain politics. With the largest land area of any African country and long land borders with a number of volatile states, Algeria remains a regional safety valve according to Mr Ghebouli, ‘especially considering that the Algerian army has a long history combating terrorism and facing security challenges’.

To prevent a familiar pattern - a slide from the hope provided by a promising movement for democracy to an acute regional crisis, policy makers both in Algeria and abroad must support dialogue and concessions.

An unstable Algeria could prove a fertile environment for the expansion of terrorist organisations, particularly the expanding Al Qaeda in the Islamic Maghreb. Additionally, given its resource base and Mediterranean access, ‘Algeria would also be a hub of a new international competition over influence, which will eventually turn into an ‘all lost competition’, in which rivals vying for control fosters increasing instability.

To prevent a familiar pattern - a slide from the hope provided by a promising movement for democracy to an acute regional crisis, policy makers both in Algeria and abroad must support dialogue and concessions. Only through a concerted and orderly reform process will Algeria escape the troubles that have afflicted many of its more volatile neighbours.