President Donald Trump is lending support to embattled Israeli Prime Minister Benjamin Netanyahu ahead of a critical election Tuesday by publicly backing one of his key priorities.

Trump tweeted on Saturday that he spoke with Netanyahu to discuss the possibility of moving forward with a formal mutual defense treaty between the two nations.

Trump says it would 'further anchor the tremendous alliance between our two countries.' 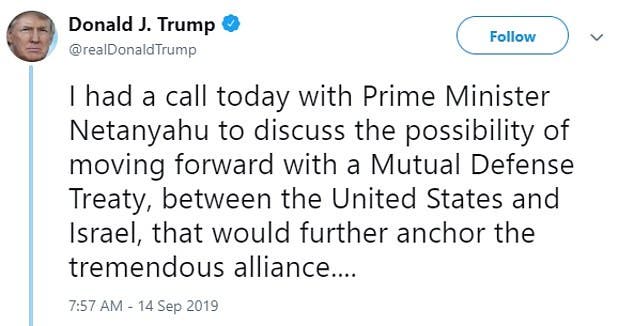 The comments just days before Israeli voters are set to decide Netanyahu's political fate are the latest effort by Trump to back Netanyahu, perhaps his closest personal ally on the world stage.

Trump added that he looks forward to continuing the discussions after the election when they meet on the sidelines of the United Nations General Assembly later this month.

Trump is spending the weekend at the White House in Washington DC, and on Saturday morning took his motorcade to Trump National Golf Club in Sterling, Virginia.

His plans for the day and potential golf partners were not made public.

Opinion polls predict a close race when Israel goes to the polls on Tuesday, five months after an inconclusive election in which Netanyahu declared himself the winner but failed to put together a coalition government.

'A Likud victory is possible but it's hanging by a thread,' said Abraham Diskin, political science professor at Jerusalem's Hebrew University, referring to Netanyahu's right-wing party.

An end to the Netanyahu era after his 10 successive years in power would be unlikely to lead to a dramatic change in Israel's policy on hotly disputed issues in a peace process with the Palestinians that collapsed five years ago.

Relations with the United States would be likely to remain on track, despite Netanyahu's close relationship with Trump.

But Netanyahu's political fate could ultimately end up in the hands of the far-right Yisrael Beitenu headed by former Defence Minister Avigdor Lieberman, a potential kingmaker in the coalition-building certain to follow the vote.

After the election in April, Lieberman blocked Netanyahu's attempts to form a coalition, citing differences with the prime minister's ultra-Orthodox allies. Opinion polls indicate Yisrael Beitenu will emerge stronger in the new ballot.