Clashes were reported between the Tunisian police and protesters who denounced the country's economic crisis and power grab by President Kais Saied. 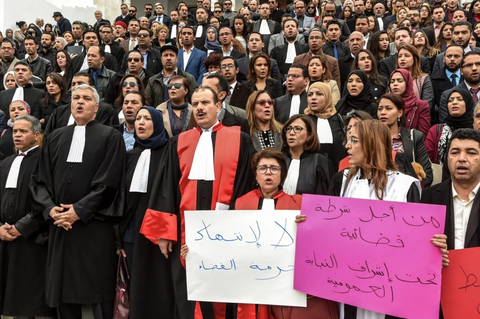 Thousands of protesters want president Kais Saied to be charged for the worsening economic situation and called for his removal. President Kais is accused of consolidating political power following parliament's removal and the constitution enshrining his one-man rule.

Different parties are protesting today in the streets of downtown Tunis. They denounce the deterioration of the economy in Tunisia under Kais Saied's presidency. This week has been harsh on Tunisians : gas shortages, 18 migrants dead in a shipwreck in #Zarzis 1/2 #Tunisia pic.twitter.com/UcZskzoUjH

Angry protesters were heard saying: "Down, down", "Revolution against dictator Kais" and "The coup will fall."

Last year, Kais Saied announced suspending the work of the parliament, then headed by Ennahda Leader Rached Ghannouchi, and taking over the power. On March 30, 2022, Tunisian president Kais Saied dissolved the parliament.