In July 2010, Iran’s parliamentary speaker Ali Larijani offered a telling prediction: ‘The Americans will have the same success in Afghanistan as in Vietnam. Years ago, the Soviet Union made the same mistake. Many people were killed and it finally pulled out. History repeats itself. We know that Afghanistan will never submit to foreign armies.’

Despite the protestations of US President Donald Trump and Secretary of State Mike Pompeo, last week’s announcement that America had moved closer to securing a historic withdrawal agreement with the Taliban confirms Mr Larijani’s premonition. American withdrawal framed by state department officials as a negotiated victory will be seen by most observers as stage-managed defeat.

Though America’s primary purpose for initial engagement in Afghanistan nearly two decades ago, the elimination of Al Qaeda and its leadership, has been achieved, it has come at a tremendous cost. 150,000 Afghan people have been killed, in addition to 3500 western coalition personnel.

On some estimates, the United States has spent as much as $2 trillion dollars on the conflict, almost 2000 times more than Afghanistan’s estimated GDP. Though America can claim modest improvements in Afghanistan’s economic performance, infrastructural development, and governing institutions, the Central Asian state remains desperately poor and its democracy fragile.

Promises to bring stability and improve the reach of central governance over the country’s diverse regions have only been partially met and were American forces to withdraw today, they would leave almost half of the country under the nominal control of the Taliban, a Sunni fundamentalist group. Though international media sources have tended to lose interest in America’s longest war, according to International Crisis Group, more people are being killed as a result of fighting in Afghanistan than in any other current conflict zone in the world.

Though international media sources have tended to lose interest in America’s longest war, according to International Crisis Group, more people are being killed as a result of fighting in Afghanistan than in any other current conflict zone in the world

The terms of the deal reportedly struck by senior Taliban leaders and US officials are not entirely known but a number of key tenets are clear: following a trial period in which Taliban forces agree to significantly reduce violent attacks, America will withdraw 50000 of its 12,5000 troops within half a year.

The Taliban will agree to not conduct terrorist attacks on the US or its allies and will not allow other militants to use its territory for such attacks. Following the official ratification of a US-Taliban deal, inter-Afghan negotiations will begin to establish a future political settlement for the country.

This process is likely to be a far more protracted and contentious one. A number of important questions will need to be answered on the future status of the Taliban. The Afghan government hopes to emulate international peace deals such as the one signed between FARC, a Marxist guerrilla group and the Columbian government, which saw insurgents disarm and the movement reconstitute itself as a formal political movement.

Yet the Taliban has significant military leverage in the country. Many of its senior leaders hope, like Iraq’s Popular Mobilisation Forces, to be integrated within the national armed forces. Constitutionally, a new working model will have to be negotiated to share power effectively between the Taliban and the internationally recognised government, and to build inclusive institutions to enfranchise and protect the country’s numerous minority populations. 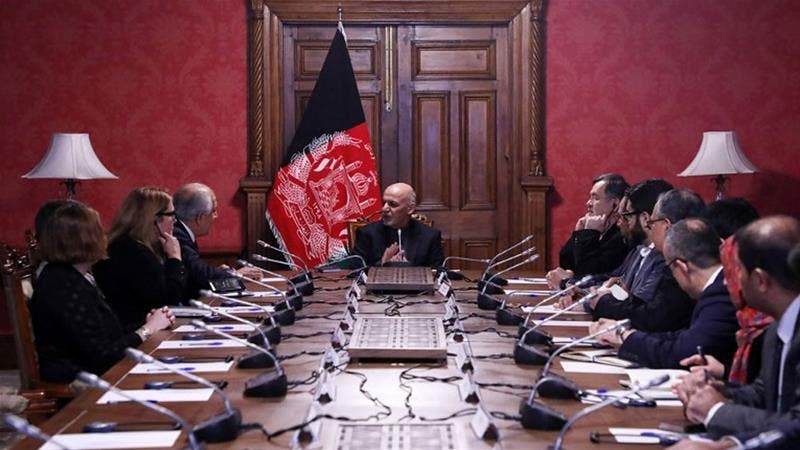 Afghan President Ashraf Ghani, the US special representative and the Taliban /AFP

The process of achieving a legitimate compromise between multiple well-armed, animus parties will be fraught with difficulties and may be met with an escalation rather than a reduction in violence. Inter-Afghan negotiations have been further complicated in recent days. Last week, President Ashraf Ghani was declared the winner of a presidential election held in September last year.

Yet the Taliban has significant military leverage in the country. Many of its senior leaders hope, like Iraq’s Popular Mobilisation Forces, to be integrated within the national armed forces

His rival, Abdullah Abdullah, declared the result invalid, slammed it as a coup and has promised to form a separate ‘all-inclusive government’. A dispute about legitimate authority in the country will weaken the government’s negotiating position vis-à-vis the Taliban, and may foster increased political violence.

Yet as has so long been the case in Afghanistan’s tumultuous and bloody modern history, decisions about the country’s political future will not be made only in Kabul. As the US prepares to withdraw or significantly reduce its presence in the country, regional and international players will jockey for position to ensure that their own interests are satisfied and that a significant power vacuum is filled. Afghanistan’s neighbours have a strong vested interest in the country’s stability.

The refugee crisis engendered by long term conflict in the country has seen an exodus of millions to neighbouring states which struggle to provide services and accommodation for a large and permanent population.

Though much attention is paid to Pakistan’s historical role in Afghani affairs, an uncertain future will push Iran into further engagement with its eastern neighbour. Iran, which shares a 1000 km long border with Afghanistan may welcome America’s withdrawal from its neighbour and has long covertly supplied certain Taliban forces to frustrate the interests of its western adversaries.

The presence of American forces on the Iranian border at bases such as Shindand in Herat province, has long been a source of tension between Tehran and Kabul. Yet a consolidation of Taliban power in Afghanistan would not be in Tehran’s interests. Iran’s promises to serve as a protector of Afghanistan’s large Shi’a minority, particularly its threatened Hazara communities, would be severely tested by a politically accentuated Taliban, given that groups historically militant opposition to Shi’ism.

Further, an escalation of violence in Afghanistan would open opportunities for new militant operators and existing groups such as the Islamic State Khorasan to accentuate their power. Hostile groups on Iran’s border will encourage significant anxiety in Tehran. A further destabilised Afghanistan may also lubricate an already significant cross-border narcotics trade between the countries. Afghanistan produces some 90% of the world’s illicit opium, much of which is trafficked through Iran to the rest of the world.

Iran’s promises to serve as a protector of Afghanistan’s large Shi’a minority, particularly its threatened Hazara communities, would be severely tested by a politically accentuated Taliban, given that groups historically militant opposition to Shi’ism

Narcotic abuse remains a significant domestic problem in Iran- it is estimated that more than 3 million Iranians are regular drug users, primarily of opium and heroin supplied through Afghanistan. Iran may be forced to play a more central role in Afghanistan as America withdraws to protect vital security interests.

Though officials in Washington may soon wash their hands of America’s most protracted defence commitment, an agreement between the US and the Taliban is only the first step in what will likely be a long and painful process towards stability in the long-troubled state. It may prove up to Tehran to help manage a process whose failure it would bear much of the cost of.