Sheikh Abdullah bin Zayed Al Nahyan, Minister of Foreign Affairs and International Cooperation, met separately with a number of foreign ministers of countries participating in the 77th session of the UN General Assembly in New York. 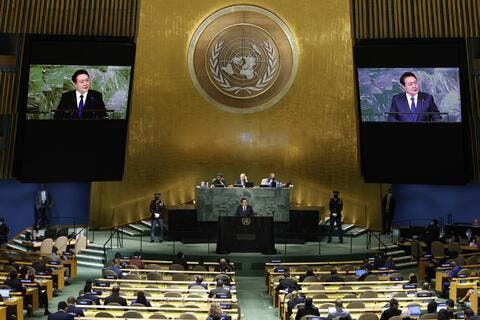 My Emirati counterpart Sheikh Abdullah bin Zayed Al Nahyan and I met in New York to strengthen relations between Ukraine and the UAE. We agreed to speed up free trade agreement negotiations and explore new infrastructure projects. We also focused on the global food security. pic.twitter.com/yqi1uyZNYH

During the meetings, the parties reviewed bilateral cooperation and partnership between the UAE and these countries in several sectors, including energy, renewable energy, food security, economic, educational, tourism, investment and culture.

The meetings reviewed bilateral relations and strategic partnerships in all sectors, including economic, investment, financial, renewable energy, food security, cultural, educational and tourism, between the UAE and these countries.

The meetings also reviewed the global efforts made to combat climate, especially with the UAE hosting the 28th Conference of the Parties (COP28) in 2023.

The Ministers also discussed several issues on the agenda of the 77th session of the United Nations General Assembly, and exchanged views on regional and international developments.

In a related context, the UAE Foreign Minister met with David Beasley, Executive Director of the World Food Programme (WFP).

Sheikh Abdullah and Beasley discussed joint cooperation between the UAE and the World Food Programme as part of the country's commitment to multilateral action in the face of emergency humanitarian crises and working to Provide the necessary support to the most affected communities.