Published December 2nd, 2021 - 11:15 GMT
Israeli soldiers of the Nahal Brigade take part in a drill near the settlement of Kidmat Tsvi in the Israel-annexed Golan Heights, on October 27, 2021. (Photo by JALAA MAREY / AFP)
Highlights
It called on Israel to resume peace talks and withdraw from the occupied Syrian Golan

The UN General Assembly has adopted a resolution demanding that the Israeli regime fully withdraw from the Syrian Golan Heights, declaring “null” and “void” the regime’s imposition of its jurisdiction on the occupied territory. 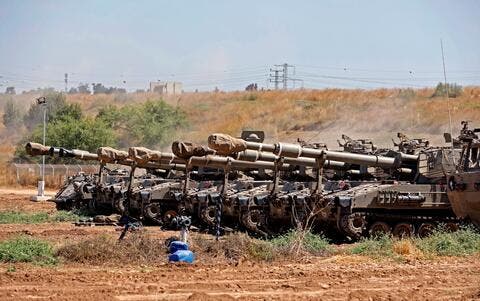 During a session on Wednesday, the Assembly adopted the draft resolution titled “The Syrian Golan” by a recorded vote of 94 in favor to 8 against, with 69 abstentions.

Israel was joined by the US, the UK, Australia, Canada, Marshall Islands, Federated States of Micronesia, and Palau in voting against the draft resolution.

The UN General Assembly adopts a resolution demanding that the Israeli regime fully withdraw from the occupied Syrian Golan. https://t.co/rS0HVM41tu

The draft resolution reaffirmed that settlement construction and any other Israeli activities constitute a change in the demographic nature of the occupied Syrian Golan.

It called on Israel to resume peace talks and withdraw from the occupied Syrian Golan in accordance with the border lines of June 4,1967.

The Israeli decision to impose its laws, jurisdiction, and administration on the occupied Syrian Golan is null and void, it declared.

Introducing the draft resolution, Permanent Representative of Egypt to the United Nations Osama Mahmoud Abdel Khalek Mahmoud said the first step to stopping the downward spiral in the Middle East was to put an end to the occupation of all Arab territories occupied on 5 June 1967, specifically the occupied Palestinian territory and the occupied Syrian Golan.

“The international community must take a decisive position towards respect of international law and international resolutions, most important of which are the United Nations resolutions that reaffirm the inadmissibility of annexation of territories by force and the rejection of any unilateral measures or demographic changes in territories under occupation,” he said.

The representatives of Jordan, Oman, and Argentina also voiced their support for the resolution and called for an end to the occupation of the Golan Heights.

Syria’s Permanent Representative to the United Nations Bassam Sabbagh thanked all member states who supported the draft resolution, saying the protection provided to Israel by the US and others is a major obstacle to the achievement of a just and sustainable peace in the Middle East.

Sabbagh said the Assembly had many times called on the Israeli regime to end its occupation, and that Israel’s refusal to respect the relevant General Assembly and Security Council resolutions had led to an “unacceptable paralysis” at the United Nations.

“Stealing resources, confiscating territories, killings, arbitrary detention, and other violations are a systemic policy employed by the occupying power (Israel),” he said.

Reaffirming his country’s right to recover the entirety of the Syrian Golan, he added that this cannot be negotiated and reiterated that all decisions taken by Israel to change the nature and demographics of that territory are null and void.

During a session on Wednesday, the #Assembly adopted the draft resolution titled “The Syrian Golan” by a recorded vote of 94 in favor to 8 against, with 69 abstentions#UN pic.twitter.com/bwtQ4bM2A2

In a unilateral move rejected by the international community in 2019, former US President Donald Trump signed a decree recognizing Israeli “sovereignty” over Golan.

Nevertheless, Syria has repeatedly reaffirmed its sovereignty over Golan, saying the territory must be completely restored to its control.

The United Nations has also time and again emphasized Syria’s sovereignty over the territory.