Published August 4th, 2022 - 05:34 GMT
DJI Matrice 300 reconnaissance drones, bought in the frame of program 'The Army of Drones' are seen during test flights in the Kyiv region on August 2, 2022, prior to being sent to the front line. (Photo by Sergei SUPINSKY / AFP)

The United Nations announced it will form a fact-finding team to study Thursday's rocket attack that killed dozens of Ukrainian prisoners of war in Donbas. 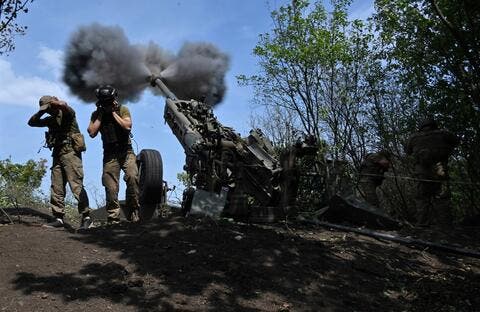 UN Secretary-General Antonio Guterres told reporters Wednesday in New York both Russia and Ukraine have requested an investigation into the bombing. Guterres said terms of the "independent team members" would need to be accepted by both countries before any fact-finding could begin, and added it would not be a criminal investigation.

Why not allow an international team to investigate this incident. Russia’s claims seem so far fetched! Maybe the United Nations should be involved. Russia, Ukraine trade blame for deadly attack on POW prison - The Washington Post https://t.co/grnrDFaT3Q

Last week's attack targeted a prison in Olenivka, in the separatist Donetsk region in eastern Ukraine, and killed between 40 and 50 Ukrainian POWs captured after the long battle for Mariupol. Ukraine and Russia have blamed each other for the deadly attack which also injured 75 others.

Ukraine, which called the blast "a deliberate war crime by the Russians," accused a private military contractor of executing the attack. On Wednesday, the Ukrainian Defense Ministry's Defense Intelligence department claimed the explosion was carried out by the Wagner group, a contractor whose fighters have been involved in Russia's invasion of Ukraine.

Ukrainian officials accused Moscow of carrying out the attack with the intention of blaming Ukraine to cover up atrocities at the prison and accuse Kyiv of war crimes.

The Russian Ministry of Defense blamed Ukraine for the attack saying in a statement "the Kyiv regime deliberately carried out a bloody provocation." Russian military officials said the attack was carried out with U.S.-supplied HIMARS rocket systems like those recently shipped to Ukrainian forces.

Both Russia and Ukraine have launched their own independent investigations.

The prisoners of war who were killed had been captured by Russia after the battle for Mariupol earlier this year, which lasted for weeks and ended with the troops fending off Russian forces at a steel plant where many civilians were also hunkered down.

Donbas comprises the Donetsk and Luhansk regions and has been the primary focus of the Russian military's war since April.