US Consider Sanctions on Assad, Russia and Iran for Syrian War Crimes 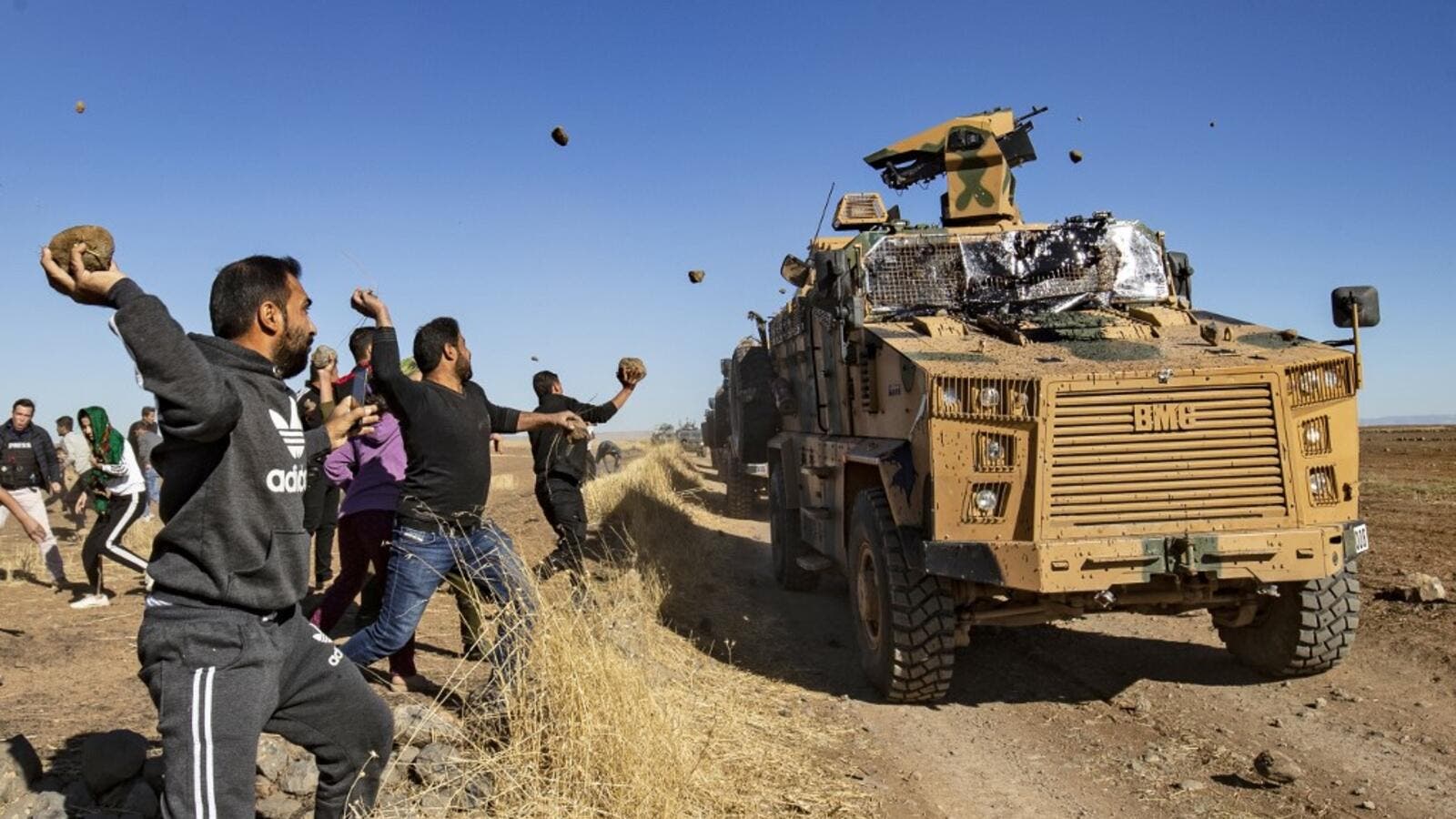 Kurdish demonstrators hurl rocks at a Turkish military vehicle on November 8, 2019, during a joint Turkish-Russian patrol near the town of Al-Muabbadah in the northeastern part of Hassakah on the Syrian border with Turkey. Delil SOULEIMAN / AFP
Highlights
It would include sanctions on other governments - such as Iran and Russia - who have aided Syria’s military or contributes to the reconstruction of Syria.

The US will sanction Bashar Al-Assad, Russia and Iran for Syrian war crimes, as landmark legislation that is on the brink of being passed in Congress.

President Donald Trump is expected to sign the National Authorisation Act of 2020 after it goes through Congress, with some suggestions that it could be signed this week.

Congress added to it the Caesar Syria Civilian Protection Act of 2019, which authorises the use of sanctions on Syrian regime officials, and military and government leaders thought to be responsible for the horrendous war crimes committed against civilians in the country.

The bill could provide support for Syrian victims and put economic and political pressure on the Assad regime.

It also has bipartisan support calls for accountability and justice for the hundreds of thousands of victims of the regime.

The Russian military, mercenaries operating in the war-torn country, energy companies looking to profit from Syrian oil businesses and Iranian paramilitary forces helping Assad may also be the recipient of sanctions.

The Assad regime and its supporters would be held on sanctions, and the bill would require the US president to impose new penalities on any entity that conducts business with the Syrian government or its military or intelligence services.

Why the long wait?

The bill was first introduced in 2016 and has been passed in the house three times in different iterations.

The White House at the time, headed by then president Barack Obama reportedly worked behind the scenes to prevent the bill from getting a vote in the House of Representatives.

Additionally the Syrian American Council has accused Republican senator of Kentucky Rand Paul for repeatedly "putting a hold on the bill to keep it from passing, and to protect Assad".

However despite such stops and starts, the bill is closest to being passed now more than ever.

"The Syrian people have waited too long for relief from Assad’s brutality. This legislation that we've been trying to get across the finish line for years could provide some measure of that relief," House Foreign Affairs Committee Chairman Eliot L. Engel (D-N.Y.) told the The Washington Post.

What are the Caesar photographs?

The legislation was named after a Syrian military photographer, codenamed "Caesar" who defected from the Syrian regime in 2013 and smuggled over 53,000 photographs showing the torture and murder of thousands of civilians in Assad's infamous prisons.

The photos were received by international human rights groups including Human Rights Watch and have been verified by the FBI.

Shortly after, HRW released a detailed report focusing on 28,707 of the photographs that, based on the information available, "show at least 6,786 detainees who died in detention or after being transferred from detention to a military hospital".

The rest of the photographs show bodies identified by name of government soldiers, armed fighters or civilians killed in attacks, explosions or assassination attempts.

Upon hearing news that the legislation may yet pass before the end of the year, Caesar told the The Washington Post: "After more than eight years, the victims of Assad’s brutality and their families are one step closer to justice and accountability.

"I am grateful to the people of the United States represented by Congress for embodying the American values of freedom and human rights."

In 2011 the Assad regime conducted a brutal crackdown of pro-democracy protests, with the UN and human rights groups saying that it was responsible for the subsequent violence that erupted in the region, which led to the death and displacement of millions of Syrians and which gave birth to the refugee crisis.