Published May 30th, 2021 - 07:51 GMT
An activist, a member of the Belarusian diaspora in Ukraine, holds a placard depicting Belarusian President Alexander Lukashenko during a rally outside the Foreign Ministry in Kiev on May 28, 2021, held to demand the cutting of trade and diplomatic links with Belarus and the imposition of sanctions on strongman Alexander Lukashenko. Ukrainians are closely following the protests in Belarus, seeing them as a reflection of their pro-European Maidan uprising in 2013-2014. Sergei SUPINSKY / AFP
Highlights
Belarus diverted Ryanair flight in order to detain opposition journalist Raman Pratasevich.

The White House announced sanctions on Belarus and a warning not to travel to the country over a diverted civilian Ryanair flight. 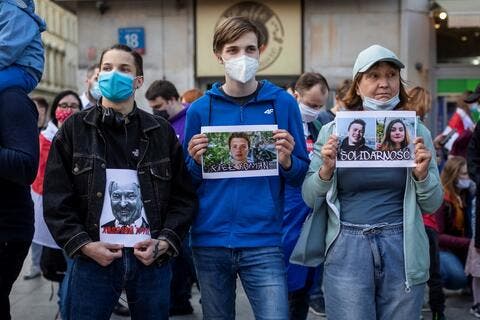 This is How Belarus is Going After Protasevich's Girlfriend!

Belarus' Lukashenko regime forced the commercial jet headed from Greece to Lithuania to land in Minsk on Sunday and arrested Belarusian journalist Raman Pratasevich upon landing. Belarusian aviation authorities said the flight was diverted to Minsk due to a bomb threat, but the White House said in the statement Friday night the plane was diverted over "false pretenses."

The United States will reimpose sanctions on Belarus after President Alexander Lukashenko forced the diversion of a commercial Ryanair flight last week to arrest a journalist on board https://t.co/R3O90ITcDI

"Belarus' forced diversion of a commercial Ryanair flight under false pretenses, traveling between two member states of the European Union and the subsequent removal and arrest of Raman Pratasevich, a Belarusian journalist, are a direct affront to international norms," White House press secretary Jen Psaki said in the statement.

"These events took place amid an escalating wave of repression by the Lukashenka regime against the aspirations of the people of Belarus for democracy and human rights."

Psaki went on to layout the repercussions for Sunday's forced take down of the Ryanair jet, which she said was accompanied by the regime's "continuing attack on fundamental freedoms."

Among them, the United States has joined the United Nations and other international diplomatic, trade and aviation leaders, in public condemnation of Sunday's interception of the civilian flight.

The U.S. Department of State also issued a Level 4 Do Not Travel warning urging U.S. citizens not to travel to Belarus.

The United States will also on Thursday begin to reimpose sanctions against nine Belarusian state-owned enterprises, which will block U.S. citizens from engaging in transactions with these entities, according to the statement.

While we are all paying attention to Belarus and the illegal kidnapping of Roman Protasevich off the Ryanair flight today, let’s not forget about the 405 other major political prisoners who Lukashenko has taken hostage https://t.co/bXL7rmWGBh

The White House said it is working with the European Union and other allies to develop a list of targeted sanctions against key figures in the regime "associated with ongoing abuses of human rights and corruption, the falsification of the 2020 election, and the events of May 23." 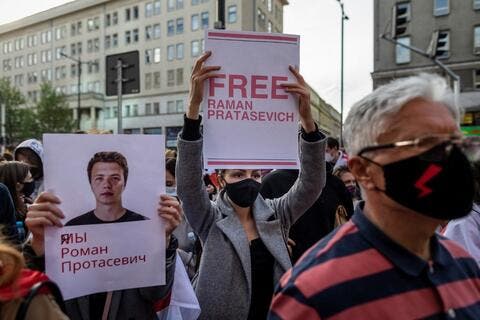 Belarus to be Punished For Arresting Activist in Forced Plane Landing

RELATED U.N.: Belarus' 'abduction' of journalist escalates crackdown on civil society
The Department of Justice and the FBI have been working with European counterparts to investigate the incident, according to the statement.

"We take these measures, together with our partners and allies, to hold the regime accountable for its actions and to demonstrate our commitment to the aspirations of the people of Belarus," Psaki said in the the statement. "We call on Lukashenka to allow a credible international investigation into the events of May 23, immediately release all political prisoners, and enter into a comprehensive and genuine political dialogue with the leaders of the democratic opposition and civil society groups that leads to the conduct of free and fair presidential elections."