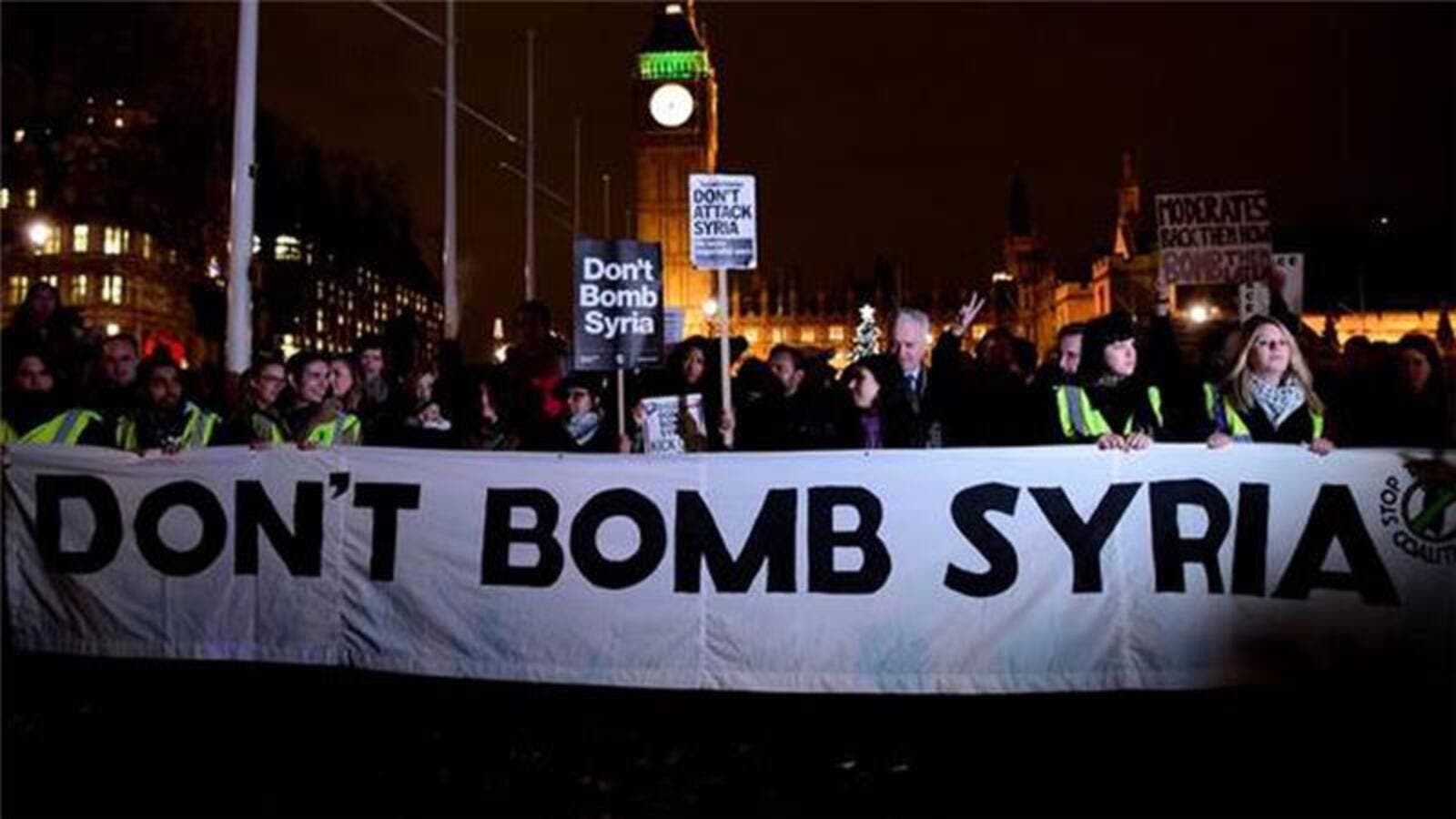 On September 17, US, British, Danish and Australian warplanes attacked a Syrian military base in Deir Ezzor that had been holding out against the so-called Islamic State (ISIS or Daesh) for months. The US-led coalition's airstrikes killed at least 62 Syrian troops before a frantic Russian officer called US officials to tell them they were hitting the Syrian military and not Daesh. The coalition called off the airstrikes; minutes later, Daesh fighters launched an assault and seized the base.

The US military immediately went into damage control mode, apologizing to the Syrian government, through Russian intermediaries, and US military sources even tried to plant a story that the troops were conscripted prisoners instead of regular soldiers. (Since the Syrian army is almost all conscripts, fighting closely with paramilitaries and irregulars, that distinction doesn't mean much.)

But it was too late: On September 22, in an interview with the Associated Press, Syrian president Bashar al-Assad suggested the US had coordinated its airstrike with ISIS fighters waiting nearby. "The ISIS troops attacked right away after the American strike," Assad told the interviewer with his usual self-assured calm. "How could they know that the Americans are going to attack that position in order to gather their militants to attack right away and to capture it one hour after the strike?"

It was classic war-on-terror rhetoric – former US defense secretary Donald Rumsfeld used the same logic in 2003 to insinuate that the Qatar-based Al Jazeera satellite channel was in league with Iraqi insurgents. Assad's implication was clear: The United States and Daesh were secretly working together to overthrow the Syrian government. This idea is widely believed across the Middle East, by people of all political persuasions. "The U.S. wants ISIS to take Raqqa and Deir Ezzor," Lebanese Hezbollah leader Hassan Nasrallah said in a speech on October 11 in Beirut. "Why is the U.S. being generous to the Nusra Front and ISIS? Simply because the times of geopolitical servitude are still upon us."

For the US government, the defining question of the Syrian conflict, for more than five years, has been whether or not to intervene, and how. This is the question that moderators ask US presidential candidates to answer at debates; it is the dilemma that has launched 1,001 op-eds and think tank papers; it is the debate that all Americans who follow the news from Syria are having with each other.

Yet all this deliberation over a theoretical American intervention against Assad is obscuring two central facts. First, the United States already has intervened militarily in the Syrian conflict. The US campaign pales in comparison to the scale of military intervention by Russia and Iran. But in the name of the war on terror, the US military and its allies have been bombing Assad's enemies in Daesh – and any civilians or Syrian troops who happen to get in the way – for two years now.

As of October 25, the US-led coalition against Daesh had carried out 5,616 airstrikes in Syria, the vast majority of them by U.S. warplanes. In the two years since it intervened in Syria, the US-led coalition has killed 6,295 people, according to the Syrian Observatory for Human Rights, a UK-based Syrian watchdog group that monitors casualties from all sides in the Syrian conflict. The Observatory calculates that at least 642 of those killed – about one in 10 – were civilians. "We strongly condemn targeting civilians anywhere, under any pretext and at any time by the international coalition and these parties," wrote the Syrian Observatory. "The Observatory also renews its call to spare the civilians from any military action on Syrian soil."

So far, the US military has acknowledged a handful of incidents that killed at least nine civilians inside Syria, including one strike in 2015 that killed two children. But it has yet to release the results of an investigation into airstrikes it conducted around Manbij, in the Aleppo governorate, this summer that observers believe killed more than 100 civilians. In new analysis released October 26, Amnesty International stated just 11 attacks, including the ones around Manbij, and found credible evidence that 300 civilians had been killed. The total number of civilian deaths from all coalition attacks, Amnesty warned, "could be as high as 600 or more than 1,000."

From the early days of the Syrian uprising, President Barack Obama's administration has called for Assad to step down. The administration's position is that the only way to reach a political settlement in Syria is to remove Assad and his family from power. Yet despite this bluster, Washington did little to counter Assad's initial crackdown against the peaceful uprising. The US government has provided funding, weapons and logistical support to a number of groups inside Syria, both armed and unarmed. But on the ground, the US and Syrian militaries are not fighting each other. Instead, they are both engaged in simultaneous military campaigns against the same enemy.

The US intervention in Syria falls under Operation Inherent Resolve, a military campaign by the Combined Joint Task Force, a coalition of 14 countries set up by the Obama administration in late 2014. In July 2016, the US-led coalition against Daesh began to coordinate with the Syrian-Russian campaign against Daesh, through the US military's limited cooperation with Russia.

"Russians and Americans have agreed to freeze the current situation so that the two military powers can carry on their endless war against terror," wrote a group of 157 Syrian writers, artists, journalists and thinkers in a joint statement, released in late September, denouncing both Russian and U.S. intervention in Syria. "At least since 2013, these two powers have been working to co-opt the Syrian liberation struggle under the rubric of the 'war against terror.' This is a war that has failed to score a single success since its outset, and has led instead to the destruction of a number of countries."

By allowing Assad to effectively outsource the battle against Daesh, the US-led bombing campaign has freed up Syrian and Russian firepower for fighting other groups inside Syria – including the very groups that the US supports. If the US military intervention has helped any of the players in the Syrian conflict, it has probably been more to Assad's benefit than to any of the opposition groups the US government officially supports.

This kind of tacit mutual cooperation between the American and Syrian governments is not new. In 1989, a peace deal brokered by Saudi Arabia installed the Syrian regime, with America's blessing, as the guarantor of peace in Lebanon. When General Michel Aoun – then the army commander and now unveiled as Lebanon's new president – refused to accept Syrian hegemony, and declared himself the true president of Lebanon, the US and Syria responded in concert: Syria bombed Aoun out of the presidential palace, and US officials kicked Aoun's ambassador out of the Lebanese Embassy in Washington, calling the Syrian-dominated Lebanese government "an essential ingredient to United States foreign policy in the Middle East."

In 1991, when the US invaded Iraq, Hafez al-Assad, Syria's president at the time, signed on to the George H.W. Bush administration's "coalition of the willing," which was intended to drive Saddam Hussein out of Kuwait. In exchange for his support, Assad gained full dominion over Lebanon. The cooperation continued under President Bill Clinton's administration, when Washington shepherded negotiations for a peace agreement between the Assad government and Israel. They came close to signing a deal before negotiations collapsed.

When Bashar al-Assad took power in mid-2000 following his father's death, the George W. Bush administration, which took power in 2001, maintained intelligence contacts with the Syrian government. After the September 11 attacks in the US, that relationship blossomed into full-fledged security cooperation over the "war on terror."

In theory, this cooperation was intended to combat al-Qaida and other militant groups. In practice, it resulted in shameful episodes like the "extraordinary rendition" of Maher Arar, a Syrian-Canadian software engineer whom the American government kidnapped, on the basis of faulty intelligence linking him to al-Qaida, and delivered to Syria to be tortured. (Arar was exonerated, became a human rights activist, and now runs a tech start-up that connects millennials with charities like Amnesty International.)

The "war on terror" has been a golden opportunity for autocrats all over the world, including Assad. A key part of the Syrian government's rationale for its relentless bombing is that it is fighting "terrorists" – a term it routinely uses, as does the US military, to describe most of the civilians killed in the course of its bombing campaigns.

One month after the airstrike that killed the Syrian soldiers in Deir Ezzor, the US-led coalition carried out six strikes using warplanes and drones, against "ISIL terrorists" in Syria. Among the targets they "engaged with" were six oil tanker trucks; an oil pump jack; four Daesh supply routes; an Daesh tactical unit. Near Raqqa, one strike destroyed two oil pump jacks.

Among the "ISIL terrorists" killed in the airstrikes was a child named Borsan Nasr Al Borsan, along with his entire family, and several members of a neighboring family, according to the independent Syria watchdog group Raqqa is Being Slaughtered Silently, which monitors killings by Daesh as well as by the coalition. "May God release our people of Raqqa and Syria," wrote one commenter, in Arabic, on the Facebook page where visitors left messages of condolence and outrage.

This, too, was clearly a mistake. Yet so far, no presidents, from Syria or anywhere else, have commented on the child or his fate. No US presidential candidates have been asked to answer, in any presidential debates or press interviews, questions about why this happened, or what they might be planning to do to stop it from happening again.