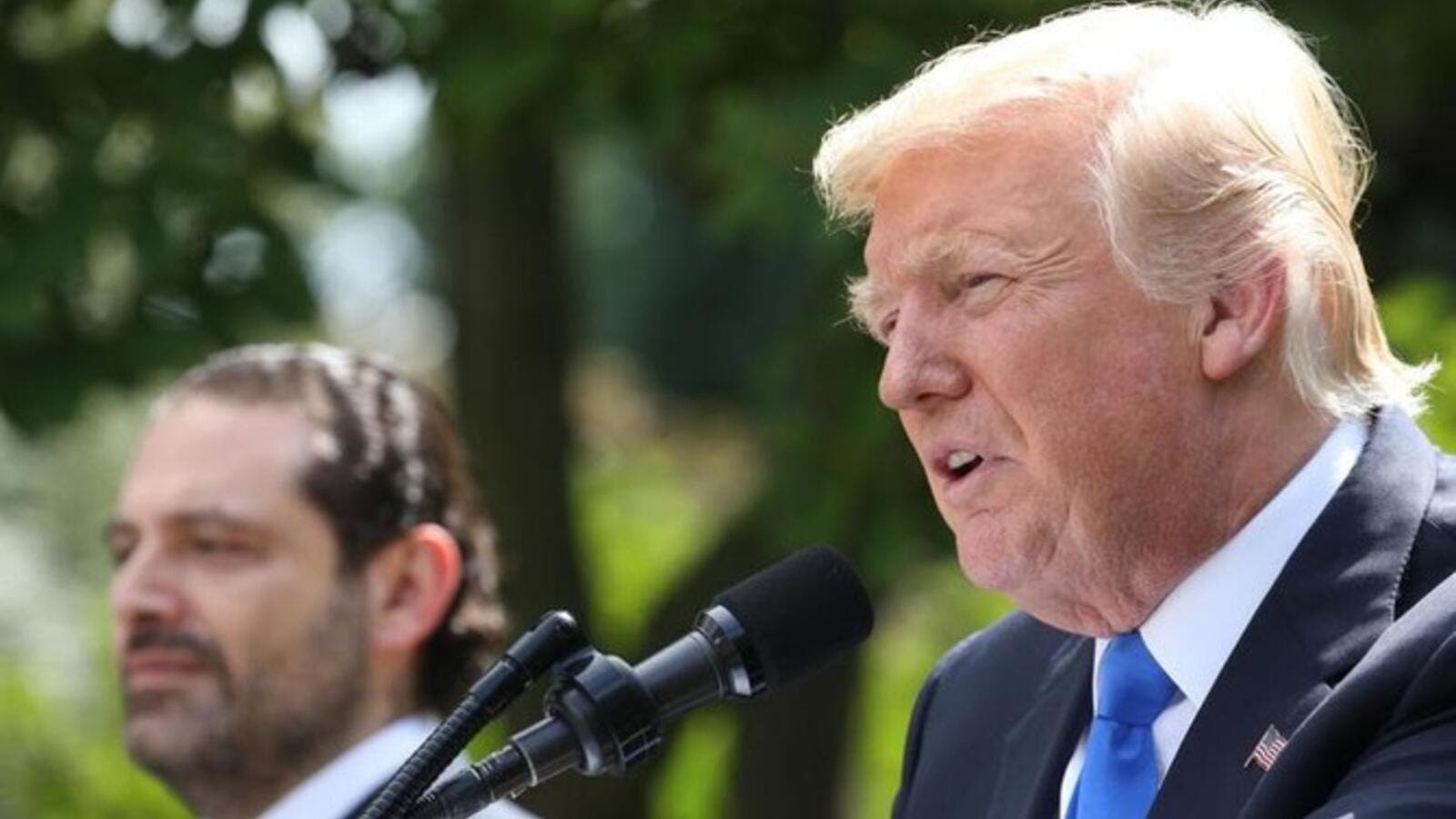 US President Donald Trump holds a news conference with Prime Minister of Lebanon Saad Hariri, in the Rose Garden at the White House on July 25.(AFP)

The United States Tuesday ramped up pressure on Lebanon to avoid toeing pro-Iran policies by urging the new government to make “national choices,” not choices imposed by “external parties,” in a clear reference to Tehran’s influence in the country through Hezbollah.

The message was relayed by David Satterfield, acting U.S. assistant secretary of state for Near Eastern affairs, during a series of meetings he held with senior Lebanese officials, including Prime Minister Saad Hariri.

Contrary to custom, Satterfield’s itinerary did not include a meeting with President Michel Aoun, giving rise to speculation that Washington might have wanted to express its disapproval of the president’s political stances, viewed by many as favoring Hezbollah, and especially his support for normalizing ties with the Syrian regime.

A Baabda Palace source that by late Tuesday night said Satterfield had not requested a meeting with Aoun for Wednesday.

When asked why Satterfield did not meet with Aoun, a U.S. Embassy source said: “Ambassador Satterfield notes that this was a very short visit and that he had useful meetings with the foreign minister and the prime minister.”

Satterfield arrived in Beirut Monday night on a previously unannounced visit aiming to prepare for a trip by U.S. Secretary of State Mike Pompeo, who said Monday that he would head to Lebanon next week. Shortly after his arrival, Satterfield was hosted at a dinner held by the Lebanese Forces and attended by the four LF ministers and other officials. LF leader Samir Geagea was not present at the dinner.Accompanied by U.S. Ambassador to Lebanon Elizabeth Richard, Satterfield met with Hariri at the Grand Serail Tuesday, discussing bilateral relations and the situation in Lebanon and the region, according to a statement released by the premier’s media office.

Satterfield did not speak to reporters after the meeting.

Satterfield’s visit was the first by a high-ranking U.S. official to Lebanon since the formation of a new government on Jan. 31.

Speaking to reporters after meeting with Bassil at the Foreign Ministry, Satterfield praised the Lebanese government’s decision to fight widespread corruption, save the crumbling economy and address security issues.

“The United States is committed to Lebanon and we would like to see it move forward and face its choices. We and other states will deal [with Lebanon] depending on the way Lebanon will make these choices which we hope will be positive in the interest of Lebanon and the Lebanese people and not in the interest of external parties,” Satterfield was quoted as saying in a statement released by Bassil’s media office.

After holding talks with Gemayel, Satterfield called on Lebanon to make “national choices” that would pull the country out of “external struggles.”

The U.S. official added that the U.S. would do its best to support “Lebanon’s national choices.”

“The United States is willing to see real stability and security in Lebanon. This depends on its national choices and not on choices imposed on it,” Satterfield said.

He said that Lebanon had “long suffered from struggles and ideologies” promoted on its territory from abroad, referring to Iran, adding that Lebanon must make “serious decisions” to face such ideologies.

The Central News Agency, quoting political sources familiar with the visit, said that during his meetings with Lebanese officials Satterfield affirmed the “continued U.S. military support for Lebanon and supplying the Lebanese Army and security forces with weapons as part of the U.S. military aid program.”

Satterfield’s visit comes after Pompeo said he would be traveling to Lebanon next week.

“Last month I was in the Middle East, actually next week I’ll travel back out. I’ll travel to Beirut, Lebanon, and to Israel and then to Kuwait,” Pompeo said during a speech in Iowa.

Satterfield’s visit came two weeks after Richard warned Lebanon of Hezbollah’s “growing role” in the new Cabinet, saying this threatened the country’s stability. She issued the stern warning during a meeting with Hariri last month.

Washington, which labels Hezbollah a “terrorist organization,” has toughened its sanctions on the party, as well as on its main backer, Iran, in a bid to dry up the group’s financial sources.

Despite the U.S. concern over Hezbollah’s role in the new government, which for the first time includes three Hezbollah ministers, Richard said the U.S. would continue its long-standing support for Lebanon.

Since 2005, the United States has given the Army over $2 billion.

This year, the country is expected the provide the Army with more than $350 million in military aid.

Meanwhile, the Future Movement’s parliamentary bloc called for a halt to what it termed “spiteful policies” in approaching different viewpoints between rival political factions in order to “protect the national interest and spare the country further futile rhetoric and battles.”

“The bloc puts at the top of its priorities the outline set out by Prime Minister Saad Hariri to protect political, security and economic stability in the country and stay away from the policies of [regional] axes and involving Lebanon in struggles that harm its role, interest and relations,” a statement issued after the bloc’s weekly meeting chaired by Sidon MP Bahia Hariri said.

“The bloc will spare no effort or dialogue aiming to boost links of ... cooperation to stop the cycle of political tension that is moving from one front to another,” the statement said.

The bloc was apparently referring to the media war that erupted over the weekend between the Free Patriotic Movement’s OTV and Future TV over corruption charges.

After OTV opened its nightly news bulletin accusing ex-premier Fouad Siniora of illegally spending billions of dollars in extrabudgetary funds during his tenure, the Future Movement hit back, criticizing Bassil and the Free Patriotic Movement directly.

Siniora last week denied some $11 billion in extrabudgetary spending during his tenure was illegal, lashing out at Hezbollah for reviving the long-standing controversy.

The bloc expressed support for Siniora and condemned the “campaigns targeting his political and economic policies.”

As part of efforts to aiming to tackle corruption, Bassil, the head of the FPM’s parliamentary Strong Lebanon bloc, said after the bloc’s weekly meeting he had presented to Parliament an urgent draft law to lift “banking secrecy” and immunity on officials found guilty in graft cases.

Separately, Speaker Nabih Berri criticized the government for not communicating with Syria on the issue of refugee returns and other key issues.

Speaking during a dinner at the Lebanese Embassy in Amman Monday, Berri said: “The government is burying its head in the sand and is not speaking to Syria about the refugee returns and the [Nassib] border crossing ... as well as Syria’s reconstruction plans,” according to a statement released by his office Tuesday.

The Nassib border crossing between Syria and Jordan was reopened in October after having been closed for three years.

The closure dealt a heavy blow to Lebanon’s export market, with Lebanese agriculture in particular suffering from longer, less practical and more costly transit via sea.