Was a Secret UK Base Involved in General Soleimani's Murder?

Published October 3rd, 2021 - 10:00 GMT
A Iranian man carries a portrait of slain Iranian General Qasem Soleimani, on the 40th day of his killing in a US drone strike, during commemorations marking 41 years since the Islamic Revolution, in the capital Tehran on February 11, 2020. AFP / Atta KENARE
Highlights
Secretive UK base linked to US assassination of Iran’s General Soleimani

A new research reveals that a secretive UK intelligence base was likely involved in the US military’s drone strike that assassinated Iran’s Lieutenant General Qassem Soleimani in early 2020, among its other controversial targeted killings. 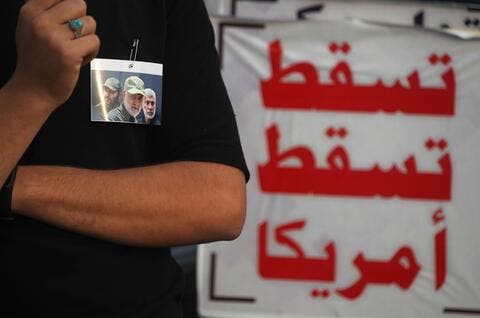 According to the research, it “was probable” that the targeted killing of General Soleimani — who headed the Quds Force of Iran’s Islamic Revolution Guards Corps (IRGC) — had been planned using information obtained from the Menwith Hill intelligence base, run by the UK Royal Air Force, in Yorkshire, The Guardian reported on Saturday.

"The involvement of the UK and Menwith Hill in an assassination that threatened to spark a war should be of great concern" https://t.co/h3UoIH2ReC

The research, titled ‘Menwith Hill in 3D, Domes, Data and Drone Strikes,’ was presented at a special meeting of the Menwith Hill Accountability Campaign, which works to raise public awareness meant to make the facility accountable for its activities.

Menwith Hill, the report said, “acted as a foreign outpost of the US National Security Agency (NSA).”

The research also raised questions about whether British personnel on the site are involved in assisting deadly US drone strikes — in particular in Yemen, Pakistan and Somalia.

“The involvement of the UK and Menwith Hill in an assassination that threatened to spark a war should be of great concern,” Barnaby Pace, an investigative journalist, wrote in the report in reference to General Soleimani’s assassination. “The UK government’s failure to assure the public that the base was not involved raises deep questions about the accountability for actions at the base.”

He also complained that the US and UK forces at Menwith Hill “operate beyond public scrutiny and accountability,” and that, unless there were change, “Orwellian surveillance systems and extrajudicial executions exposed in recent years will likely continue.”

“Intelligence programs at Menwith Hill have reportedly played a key role in operations to ‘eliminate’ people in Yemen, as part of a deadly drone bombing campaign that has resulted in dozens of civilian deaths in a country that neither the UK nor US has declared war with,” he added.

“Any US military activity or US security agency activity carried out at Menwith Hill [must] be carried out in such a way as to make those responsible fully accountable to the UK.”

Menwith Hill is the largest known overseas site of the NSA, with 600 US personnel and 500 British civilians on site.

The base is part of an eavesdropping network, able to collect data from hundreds of millions of emails and phone calls daily and of pinpointing phones on the ground, according to the files leaked by US whistleblower Edward Snowden. Information obtained can be used in “capture-kill” operations.

Agents of the company handed the information of General Soleimani and his entourage to the US as soon as they entered the Baghdad International Airport, outside of which the then Quds Force commander was murdered by the US drone raid, Tehran Prosecutor Ali Alqasimehr told Mizan on December 31, 2020.

General Soleimani was visiting Baghdad at the official invitation of the Iraqi government when he was assassinated, along with his Iraqi trenchmate Abu Mahdi al-Muhandis, the deputy head of the Popular Mobilization Units, and their other companions.

Both commanders were highly popular because of the key role they played in eliminating the Daesh Takfiri terrorist group in the region, particularly in Iraq and Syria.

Research reveals that a secretive UK intelligence base was likely involved in the US military’s drone strike that assassinated Iran’s Lieutenant General Qassem Soleimani early 2020, among its other targeted murders
“operate beyond public scrutiny accountability,”@BorisJohnson pic.twitter.com/oBTSDG4uqu

The latest revelations have prompted calls from human rights campaigners for London to provide explanations on whether Yorkshire’s Menwith Hill base has been directly involved in the carrying out of US drone strikes.

Israeli military intel chief: Soleimani’s assassination ‘one of most significant events in my time’

Also on Saturday, head of Israel’s military intelligence Major General Tamir Hayman said the assassination of General Soleimani was “one of the most significant and important events in my time,” adding that it made a significant contribution to the regime’s security.

In an interview with Walla news website, he said the Iranian general was the man who designed, approved and acted against Israel.

General Soleimnai, Hayman said, had a strategic vision and operational capacity where he could get things done in Syria in a short period of time.

“He was also the designer of Syria — that’s the bigger story. There are not many people like him,” he said.