What Does It Take to Rebuild The Beirut Port?

One Lebanese man has worked day and night since the devastating Beirut port blast of Aug. 4 last year to ensure his lifetime’s work is salvaged from the rubble. In less than six months, Robert Paoli became the first trader to reopen a warehouse in the Port of Beirut Logistic Free Zone following the disaster.

“I’ve worked in the freight-forwarding business all my life,” the 57-year-old told Arab News. “I always believed in Lebanon from the beginning, and I worked very hard to create my units in the free zone here.” 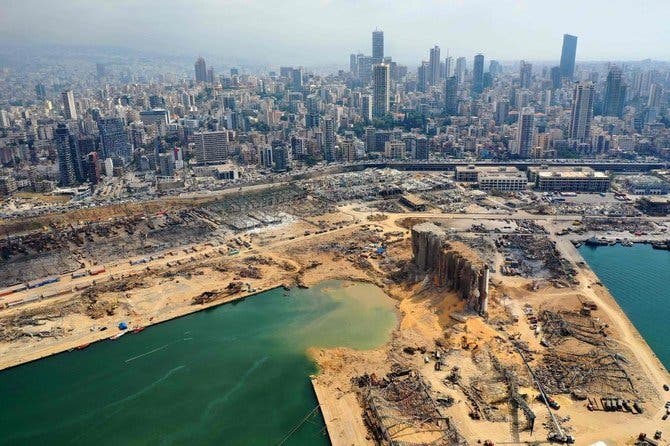 Beirut’s strategic location on the Eastern Mediterranean coastline made the port a thriving economic asset. But all that changed one Tuesday afternoon when a nearby warehouse containing nearly 3,000 tons of highly volatile ammonium nitrate caught fire.

The resulting two explosions sent an enormous shockwave through the port and surrounding districts — taking Paoli’s warehouses with it.

Paoli had spent upward of $1.5 million and poured years of hard work into his new warehouse, which had been due to open for business in just a matter of weeks. All types of goods were already stored there, from electrical appliances and tires to chemical agents.

Recalling that horrific day, Paoli said he was lucky to have left his office early, a decision necessitated by COVID-19 restrictions in place at the Logistic Free Zone. As he joined his son for a game of tennis at his club 20 minutes out of town, Paoli received an alarming phone call from a friend about a fire at the port.

“Having three units there and a new warehouse in the Karantina area very close to the port, I was anxious” Paoli said. “My other friend who lived across the port couldn’t see anything. But five minutes later, I heard the explosion.”

The blast was heard as far away as in Cyprus, at a distance of more than 200 kilometers. About 210 people were killed and 7,500 injured as the shockwave flattened nearby buildings and overturned vehicles.

“I thought a bomb had hit my club,” Paoli said. “We were far away, but it floored us and the windows broke.”

As a gigantic black cloud rose from the faraway port, Paoli jumped into his car and raced back to the city. Before he arrived, the gatekeeper from the Karantina warehouse called to say everything was gone.

“I was shocked,” he said. “I asked if there were any injuries and there were none, thankfully. My wife called me crying, saying she saw on TV my warehouse in the free zone totally destroyed.”

When he arrived, Paoli found a nightmarish scene, with what remained of his cargo stock trapped beneath tons of rubble. “All my employees came and wept,” he said. “Just thinking about it makes me relive the moment. When I realized how extensive the damage was, the reality of the situation sank in.”

The Lebanese army soon arrived to prevent looters from taking what remained of Paoli’s stock. It was at that moment Paoli resolved to rebuild. “It felt like a challenge for me, thinking we will not go down,” he said. “It was impossible for me to not rebuild.”

That night, Paoli’s first priority was securing his stock, spread across various sites. To supplement the army’s presence, he also placed his staff on round-the-clock guard duty.

“It was our duty to protect it for our clients,” Paoli said. “My team is incredible. I really felt how much this company meant to them and how much they respected me.”

When the sun rose the following day, the reconstruction effort began. Averaging just four hours of sleep per night, Paoli arrived at 6:30 a.m. every single day for the next six months to clear the debris and salvage what he could.

“It was a big responsibility on my shoulders, because our warehouse units were fully loaded with merchandise,” he said. “We had 80 to 90 40-foot containers. It was hell.”

What cargo they could be saved was removed and either delivered to clients or stored safely. But the trouble was far from over. A month later, another fire broke out at a neighbor’s warehouse.

“The army tried to stop us from entering to try to contain the fire, but we managed to do it within three to four hours,” Paoli recalled. “All the neighboring warehouses burned but ours. We were lucky we were able to save it.”

To add insult to injury, Paoli was taken in for questioning in relation to the fire, but released 24 hours later, angry and demoralized.

“I was exhausted and down because I was trying to do something good and I got arrested,” he said. “I felt like I had gone back to zero. I was really affected but I had this constant drive to rebuild, and this gave me the strength to keep going.”

Soon enough, Paoli’s industry and toil paid off when his warehouse reopened for business in the free zone.

What upset him, however, was the lack of support from government and aid agencies. “Nobody cared or asked about us,” he said. “Associations came to help people, but not us, although we were in the most affected area and we had employees who were at risk of losing their jobs.”

His children, Andrea and Philippe, are proud of their father’s stamina during those grueling months.

“I was impressed by his attitude,” said Philippe, a former professional footballer. “He was the only one expressing gratitude that everyone was safe, and rebuilding was like an everyday task for him.

“Looking back, we were the only ones who were able to rebuild in this time thanks to this attitude. This dedication towards his employees really opens your heart. They’re part of our family.”

Andrea, a former national taekwondo champion, praised her father for taking responsibility for rebuilding his business and caring for his staff when no one else would.

“It would have been much easier to do nothing, give up, put the blame on others and, eventually, fire employees,” she said.

“What my father did was take a difficult path, following his strong integrity, care, and outstanding crisis-management skills. I can only hope it inspires others around him at a time when the country has plunged into a never-ending nightmare.”

By all accounts, Lebanon’s handling of the disaster’s aftermath leaves a lot to be desired. Eight months on, the blast investigation is still going on, because of which Paoli has not seen a cent from his insurance company.

As he struggles to absorb his share ($3 million) of the free zone’s collective $50 million loss, Paoli says his view of his country has completely changed.

“Before the blast, I always believed that, whatever happens, I will continue growing and working in Lebanon. It’s our country and we have to remain here,” he said.

“But right now, I am saying no more. I will protect what I have, my business and my employees because they’re like my family, but no more expansion plans in this country. For the first time in my life, I am starting to think of doing something outside of Lebanon.”

Paoli’s wife Mona agrees the faith they once had in Lebanon has run out of road.

“Robert’s positivity is contagious,” she said. “But for us, the adventure stops here, and a new page is opening in our life.”