What does Russia Want with the Taliban? 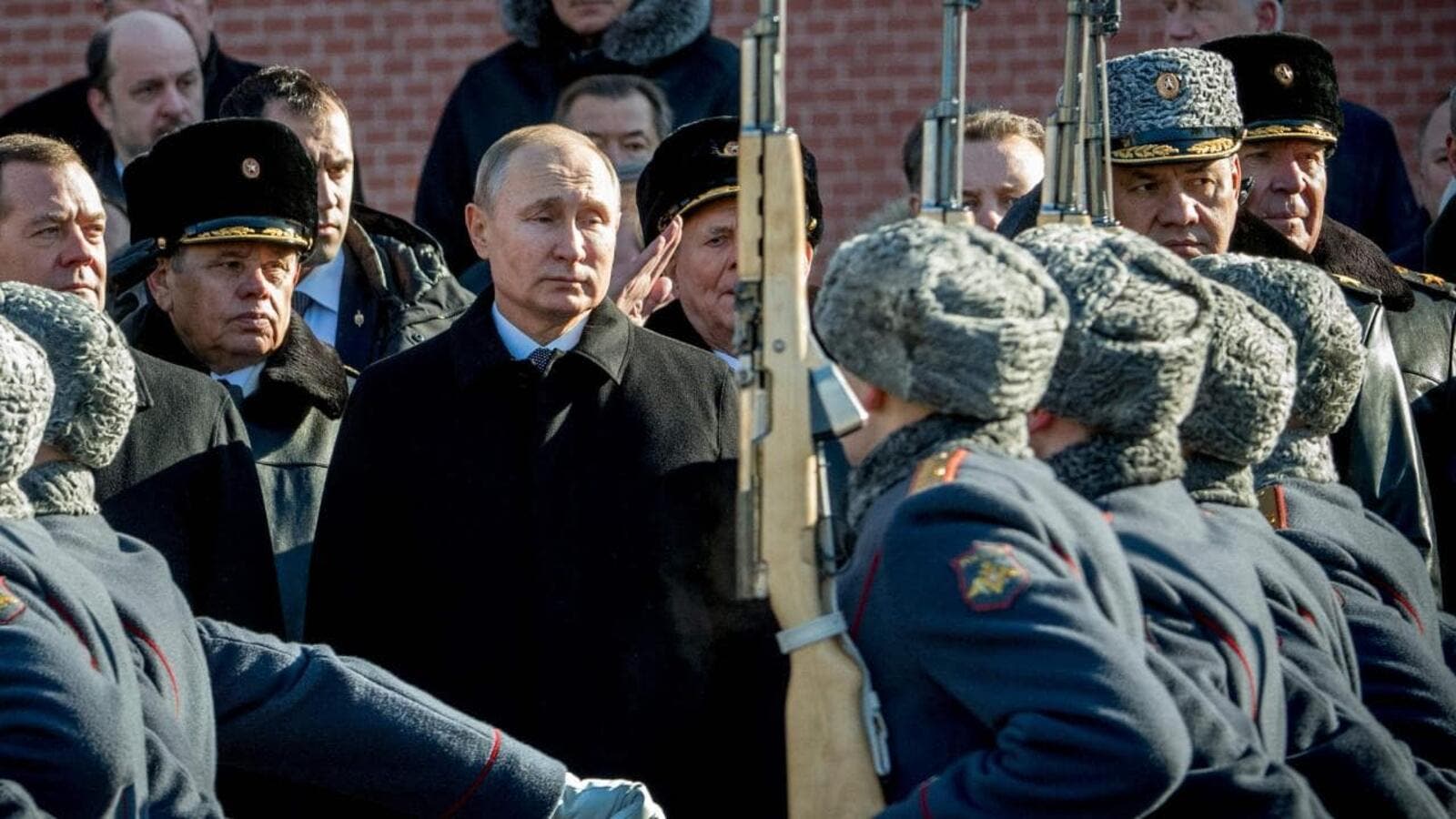 Putin meeting with soldiers of the Russian army (AFP/FILE)

When Syria’s Assad needed an ally to defend him against rebel gains, he called on Putin to save him. After Trump’s recent threat of military action against Assad, Russia’s Ambassador to Lebanon threatened to shoot down any U.S. missile aimed at Syria, and Russian planes were seen flying low near U.S., British and French military assets in the Mediterranean. In Iraq, Libya and Iran, Russia’s state oil company, Rosneft, has been making multi-billion dollar deals for oil trade.

Indiviudally, these are small events. But when taken as pieces to a puzzle, it appears that Russia is beginning to emerge as the Middle East and Muslim world’s key power-broker. This has meant forging unlikely alliances with historical foes.

In Afghanistan, Russia has begun hedging its bets between competing governments and militant groups in wartorn countries.

Most notably, experts are now claiming with relative certainty that Russia is providing support the Taliban—a group it vehemently sought the destruction of when it tried to occupy the country in the 1980s.

Putin, who once said, "Russia doesn't negotiate with terrorists. Russia destroys them,” is now preparing for the government of Afghanistan to fall to the Taliban, and is doing everything it can to ensure its regional influence doesn’t fall with it.

The Russian Gambit in Afghanistan

From 1979 through the 1980s, the Soviet Union tried and failed to occupy Afghanistan. The bungled occupation cost the Soviet Union dearly in terms of lives, influence and drained its coffer for a decade. Russians consider it their Vietnam War, and the former Soviet Union essentially gave up hope to ever have a presence in that country.

But now, things have changed, and involving itself in Afghanistan no longer appears too costly. Putin has exploded onto the Asian and Middle Eastern stage with a new goal: make Russia Great Again.

To do that, Putin has been making himself an ally that countries and groups can’t afford to lose.

In March 2018, rumors circulated that U.S. officials were scrambling to understand whether Russia was supplying the Taliban with weapons. A U.S. general said in an interview that his troops have seen evidence of Russian military supplies going to the Taliban, and Defense Secretary James Mattis was reportedly taken aback by such claims.

To understand the nature of Russian support to the Taliban, Al Bawaba spoke with Paul Stronski, a career veteran of the U.S. Foreign Service who served in several advisory positions to the president and national security advisor on Russian and Eurasian affairs.

“From what I understand, Russia has provided some limited support to the Taliban,” Dr. Stronski said. “But, other types of support and contact (diplomatic, financial) certainly are possible.   Russian Special Representative to Afghanistan Zamir Kabulov stated in 2015 that Russia and Taliban interests converge on one issue: defeating ISIS. So, [this] is what brings them together.”

While its diplomatic and financial support to the Taliban are traceable and even somewhat publicly acknowledged, its supply of arms to the Taliban is much harder to verify.

The police chief of the Baharak district of Afghanistan claimed that 1,000 weapons were supplied by Russia to militia commanders in the north, and another analyst claimed that aiding the enemies of the United States “part of the game in Afghanistan.”

However, Russian analyst Alexei Malashenko argued that the types of weapons being supplied, namely Kalashnikovs, are hard to trace back to Russia and “could come from anywhere.”

A German newspaper published an account of a Russian mercenary likely headed for Afghanistan with what looks to be a transcript of an exchange between the private soldier and his commanding officer:

Nikulin: Where will I be deployed? In Syria?

Ivanov: No, that's an old issue. I am not at liberty to tell you where you will be sent. But you can probably figure it out on your own. Our army fought there back in the 1980s. There is a lot of sand and plenty of mountains there. There will be a peacekeeping operation there too. When you go there after your training, you'll even get a medal for courage. But there won't be more honors than that. You won't be on television. Any other questions?

The newspaper, Zeit, deduced that Nikulin was headed for Afghanistan.

In funding the Taliban, Russia is preparing for the possibility that the Western-backed Afghanistan government will collapse and Afghanistan will fall under the influence of the Taliban. If that were to happen, Putin would not want to be cut out of the country, so he’s making friends, fast.

“Over the past few years, Russia has carried out a variety of foreign policy moves to position itself in the Muslim world. Russia appears to be developing its own network of contacts to defend Russian interests should the Afghan central government collapse,” Dr. Stronski told Al Bawaba.

He added that, “the Kremlin believes the Taliban is focused mainly on gaining power in Afghanistan, so it is a threat to the central government, but not to Afghanistan’s neighbors in Central Asia.  ISIS, which has gained toeholds in Afghanistan has a broader agenda with elements operating in Afghanistan & Pakistan and potentially posing a risk to Central Asia—which Russia considers a buffer between Afghanistan’s instability and Russia itself.”

In other words, Putin wants to make sure ISIS does not gain any more power lest the rogue group threaten his broader geopolitical agenda, so he’s utilizing every resource available in Afghanistan to suppress the group.

“For this reason, Russia has ramped up cooperation with the Taliban.”

On Jan. 31, a BBC study found that the Taliban are openly active in 70 percent of the country, an increase over previous years. Estimates from the United States Air Force (USAF), put the percentage slightly lower than the BBC—56 percent. Nonetheless, multiple sources indicate that the government now controls only about 30 percent of the country—the rest is contested or controlled by the Taliban and other warring parties.

In stark contrast, studies in 2015 estimated the Afghan government controlled 72 percent of the country.

The Afghanistan government would not have to be completely destroyed for it to be effectively replaced, it merely needs to lose enough control that it can no longer effectively arbitrate politics in certain strategic regions for Russia.

At the same time, an ISIS affiliate group has maintained a steady presence in the country, and has endured a number of high-profile attacks, including a massive strike from Trump using one of the largest non-nuclear bombs in the world, and a recent U.S. strike against a top commander.

Putin’s newly found emphasis on Asian geopolitics has as much to do with usurping Western influence as it does bolstering Russia’s energy sector and economy.

Russia is heavily dependant upon oil—a feature of the Russian state and economy Putin tried and failed to change. One estimate claimed that a $1 drop in oil prices could cost the Russian government up to $2.5 billion, which puts constant pressure on the Kremlin to secure stable and lucrative oil deals while keeping the price high.

As such, Russian oil giants have sought to secure deals throughout western Asia and northern Africa. Russia has also worked to become China’s biggest supplier of oil and a recent deal between Russian-state owned Rosneft and China promise to expand the supply even further with new oil routes via Kazakhstan.

China, for its part, has aligned interests with Russia in Afghanistan and beyond in its own goal to develop the biggest infrastructure project in the world.

The ‘Belt and Road Initiative’ launched by China seeks to create continent-spanning roads and trading routes on land and in the oceans to streamline imports and exports with China. In essence, it wants to tether the Asian and Middle Eastern economies to China, and Russia has been hard at work to become a partner in this trade.

Both want to stabilize the region just enough to make it profitable.

All this is to say that Russia can not afford to have its geopolitical and economic agenda to be jeopardized by instability or rampant terrorism making for volatile markets. To help this, Russia has also ramped up its support for the military in Pakistan—a key country in Russia’s sights and an anchor of China’s Belt and Road initiative.

“The Taliban generally does not pose a threat to Russia’s neighbors, but primarily to the Afghan central government.  Should that government fall, Russia would prefer Taliban rule over ISIS,” Dr. Stronski concluded.

This is why Russia has decided to back the Taliban.

In the complicated and ever-evolving landscape of the Middle East, Russia is working to become the next regional hegemon.

Supplying militant groups like the Taliban is just one small cog in Russia’s machine working to project power and sure up its unstable economy.