What Does The US-Egypt 'Strategic Dialogue' Mean?

Published November 10th, 2021 - 08:47 GMT
US Secretary of State Antony Blinken (R) looks on as Egyptian Foreign Minister Sameh Shoukry speaks during a US-Egypt strategic dialogue at the State Department in Washington, DC on November 8, 2021. (Photo by Alex Brandon / POOL / AFP)
Highlights
The US-Egypt strategic dialogue was established in 1998 during the administration of former US President Bill Clinton.

In the countries’ first strategic dialogue since 2015, Egyptian Foreign Minister Sameh Shoukry and US Secretary of State Antony Blinken discussed the Ethiopian Renaissance Dam crisis, the water crisis facing Egypt, and developments in Libya and Syria. 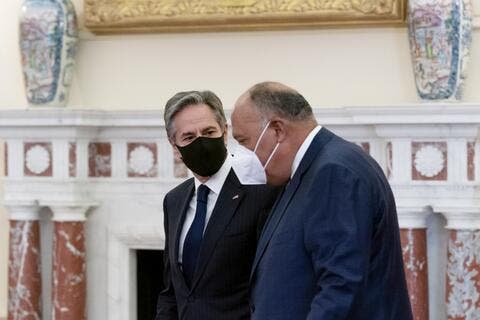 “We are committed to friendship with the US, and the partnership between the two countries is important for maintaining peace and stability in the region,” the Egyptian FM said during a joint press conference.

Shoukry praised the American role in supporting his country during the war against terrorism and extremism, noting that Cairo has been able to resume its role as a major player in the region because of the US.

During the joint press conference, Blinken said Cairo plays a pivotal role in pushing for the peace process and holding elections in Libya.

Blinken said the two countries also share the same concerns about Iran’s practices in the region and the world. The US also encouraged a peaceful solution to the Renaissance Dam issue while taking into account Egypt’s water needs.

Egyptian Foreign Ministry spokesman Ahmed Hafez said Shoukry stressed the need to resume the course of negotiations as soon as possible with the aim of reaching a binding legal agreement on filling and operating the dam to achieve the interests of the three countries involved.

Blinken also talked about the need to remove foreign forces and mercenaries from Libya and praised Cairo’s role in that issue. He stressed the importance of holding the Libyan elections as scheduled, next December.

Hafez said the meeting also dealt with a number of international and regional issues of common interest, including the state of emergency in Sudan, developments in Palestinian and Egypt’s continuous efforts to revive the peace track.

#Egypt's Foreign Minister Sameh Shoukry and US Secretary of State Antony #Blinken gave the opening comments at the State Department on Monday for the #US_Egypt Strategic Dialogue. pic.twitter.com/3whuMjiJOK

In a previous statement, Shoukry said the strategic dialogue between the two countries would address the most prominent regional and international issues of mutual interest, within the framework of continuing consultations with the American side on issues of joint interest.