What Pushes a Country to Stop Selling Weapons? 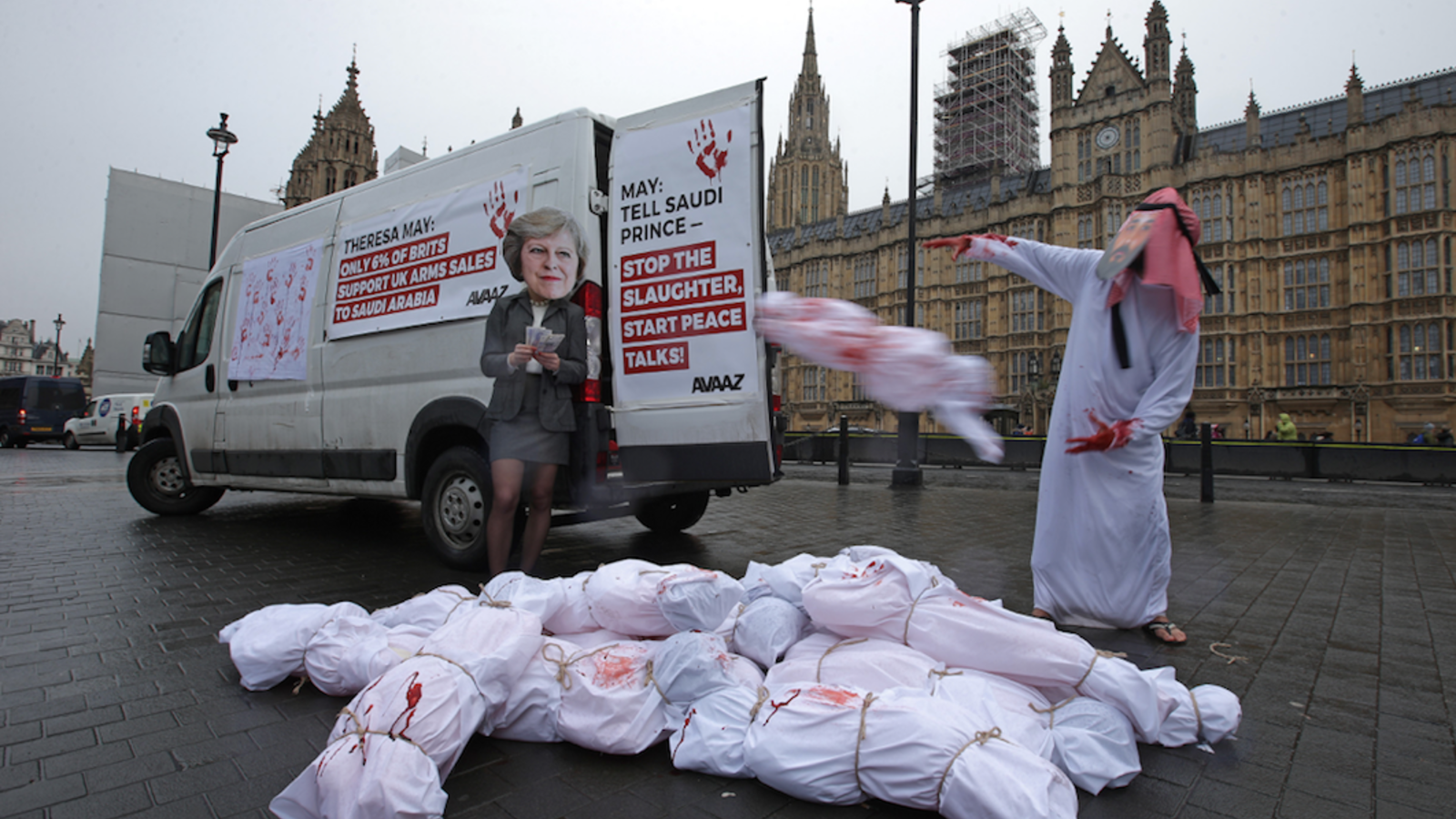 Demonstrators wearing masks depicting Britain's Prime Minister Theresa May (L) and Saudi Arabia's Crown Prince Mohammed bin Salman protest outside of the Houses of Parliament in London on March 7, 2018, against the visit to the U.K. by the Crown Prince. (Daniel Leal-Olivas / AFP)

The recent London visit of the Saudi Crown Prince Mohammed Bin Salman has once again shone a spotlight over the matter of bilateral arms sales.

Despite several ministers writing articles trying to persuade the public not to protest the visit, protesters lined up to make their anger felt towards British support for the Saudi-led coalition fighting in Yemen. And this matter once again put Britain at odds with a number of European countries.

A number of European nations have recently declared that they will no longer sell weapons to Saudi Arabia, or to its coalition partners in Yemen. Yet while human rights abuses are behind the pressure that governments contend with when they make this decision, the reasons that they ultimately choose to cease weapons sales are more varied.

The impetus that finally prompts change is very often tied up in the government’s own practical concerns, as well as with moral ones. Weapons sales are a double-edged sword for any government, and those wishing to change government’s policies on weapons experts tend to succeed when it works in said government’s own interests.

And yet in late January 2018, a spokesman for German Chancellor Angela Merkel announced that Berlin would no longer be making arms deals that might run up against “preliminary talks”. Those preliminary talks were aiming to relieve several months of parliamentary deadlock after an inconclusive general election in September.

German Chancellor Angela Merkel waits to be given her certificate of appointment by the German President on March 14, 2018 at Bellevue Palace in Berlin. (STEFANIE LOOS / AFP)

Merkel’s Christian Democrats eventually formed a coalition with the centre-left Social Democrats (SPD), but this was not without SPD leaders having to “beg” their party members to accept the deal. Members reportedly feared that Merkel’s centre-right party had already won too many concessions.

In that light, and in light of the embarrassing revelation about German arms sales to Saudi Arabia, a revelation that came about after requests from the Left party for the information, the loss of revenue from Saudi arms sales may have seemed a necessary sacrifice to garner leftist support.

Another interesting case is that of Norway, which announced at the start of January that it would stop selling arms and ammunition to the United Arab Emirates, one of the coalition partners in Yemen.

While Oslo insisted there was no evidence Norwegian ammunition had yet been used in Yemen, it had decided to cease sales as a “precautionary measure” to prevent it being used there. While it is commendable that the Norwegian government appears to have made this decision without external pressure, it is worth remembering that Norway’s international image is almost synonymous with peace-making.

The Scandinavian country has enjoyed an outsize role in the resolution of international disputes, and commands a great deal of influence as a result of that. Indeed, some have referred to Norway’s image as a peace-maker as its national “brand”. There is even a “Norwegian model” of conflict mediation.

Meanwhile, however, the U.S. and the U.K. are enduring increasingly bad press for their continued arms sales and logistical assistance to Saudi Arabia. Nor is this an entirely risk-free endeavour. Despite the enormous profits that arms sales to Riyadh represent, there have been challenges mounted.

In 2017, the NGO Campaign Against Arms Trade took the government to court over its arms sales to Saudi Arabia. MPs internal committees have also previously recommended suspending export licences to Saudi Arabia until an investigation into the use of the weaponry is conducted. Britain risks contravening its own laws on arms trade, which forbids issuing export licences in cases where it is thought the sale would put civilians at risk.

A protester holds up a placard as a demonstration against UK arms sales to Saudi Arabia takes place during the visit of Saudi Arabia's Crown Prince Mohammed bin Salman, outside Downing Street, in central London on March 7, 2018. (TOLGA AKMEN / AFP)

However, it seems that the legal threats have so far been insufficient, and the U.K. has resorted to vastly increasing its use of open licences, which means British arms manufacturers do not have to declare the value or the content of their sales. This makes it much harder to assess just how far Britain’s sales to Saudi Arabia go.

It is true that one country ceasing its provision of arms does not mean they cannot be bought from elsewhere. Indeed, the Saudi Foreign Minister made as much clear to Germany after its decision, insisting the kingdom could easily find other suppliers. However, there are advocates who disagree, and insist that the refusal to provide arms sales in certain cases can have meaningful effects. Jeff Abramson from the Arms Control Association in Washington DC told Al Bawaba:

“The provision of arms to parties at conflict has a dramatic role in the continuation and frequent escalation of conflict. Discontinuing those transfers is then often critical to the cessation of conflict. In the civil war in Yemen, many countries have made the moral and security-smart decision to no longer arm combatants, including the Saudi-led coalition who has attacked civilians and civilian infrastructure, greatly exasperating civilian suffering.

Unfortunately, the Trump administration as well as U.K. government has failed to live up to responsible standards for engaging in the arms trade. Saudi behavior has shown that the country cannot now be trusted to use arms responsibly, and Washington and London would be better served by restraint.”

If the cases of the countries who have stopped arms sales to Saudi Arabia tell us anything, it is that governments act effectively when it is in their best interest to do so. At this point, the U.K. and the U.S. are ready to accept the risks, seeing support for the Saudis as essential to their own national fortunes. Whether that remains so is still to be seen, but there is much room to try and persuade them otherwise.