Published October 14th, 2020 - 07:42 GMT
U.S. State Department Building (AFP/FILE)
When it comes to pushing for war against Iran, hawkish advocates have a number of tools in their arsenal.

They can generate propaganda on the evils of the Iranian regime while boasting of the U.S.’ ability to quickly and cleanly bring democracy to the country. They can garner influence inside the state itself. And they can target any critics in harassment campaigns aimed to delegitimize the detractors.

According to a report from Quincy Institute, the Foundation for the Defense of Democracies (FDD) tried all three tactics at the same time. The FDD is a militant think tank in Washington D.C. notorious for, among other things, claiming that U.S. Congresswoman Ilhan Omar was a secret agent for a foreign government.

The FDD’s involvement in a State Department-funded project pushing for a more militant stance on Iran is a micro-scandal that will likely never reach the front page of any major media outlet. Its moving parts are small and bureaucratic; its immediate implications irrelevant to the millions who are being crushed by a record-shattering economic and public-health crisis.

But it is illustrative of a dynamic between influential think tanks and policy-makers that shapes both public opinion and actual state policy.

In the FDD’s collaboration with the Iran Disinformation Project, the blurry line between state and non-state actor collapses entirely. What is left is an ideologically driven project to paint Iran as a dangerous, irrational rogue state that must be violently destroyed. Adherents to this idea used every tool they can access to accomplish this end.

Through detailing the FDD/State Department’s dual-strategy of shaping public perception and crafting policy agendas, we can see how U.S.-style propaganda works.

The primary tool the FDD has wielded to generate and justify a hawkish approach to Iran has been through its scholars’ writings and media appearances. Rather than climatically releasing an all-out call to war at once, the FDD instead serves up a consistent stream of reports and Twitter-ready statements that frame Iran as a place in need of violent confrontation.

At the same time, scholars argue the best way to do this is through the might of the U.S. state.

In a July 2020 event hosted by the FDD, panelists discussed “The Post-Islamic Republic Future of Iran,” and while its brochure says the FDD is not “advocating for a military invasion, but rather it means pushing for the United States to use every instrument at its disposal to undermine Iran’s clerical state,” it becomes clear through the panel’s discussion that they celebrate crippling sanctions and covert action to destabilize the country.

Nevermind how these sanctions tend to push Iran’s working and middle-class into poverty while allowing its clandestine military apparatus and political hard-liners to gain disproportionate domestic power.

Meanwhile, the FDD insists it is actually corruption inside Iran rather than sanctions which have caused lethal medicine shortages throughout the country. The answer from this analysis on how to handle Iran would thus be even more all-encompassing sanctions.

Its senior fellows are regularly quoted in outlets such as the Washington Times, the Jerusalem Post, Axios; much of it constructing a hagiography of the U.S. Executive Branch’s virtuosity in the realm of international politics.

Nevermind how these sanctions tend to push Iran’s working and middle-class into poverty while allowing its clandestine military apparatus and political hard-liners to gain disproportionate domestic power.

FDD fellow Reuel Marc Gerecht recently opined in the Washington Post, for example, that “Seeking regime change isn’t rude. It is pragmatic, cost-sensitive, humane and — in the best sense of the word — liberal,” and that such a move would go into the history books as a human rights achievement akin to the global boycott of South Africa to overturn its pro-apartheid regime.

At the same time, other FDD fellows are quick to note that international pressure and boycott campaigns against nations it likes, such as Israel, amount to “War by other means.”

Collaborating with the State 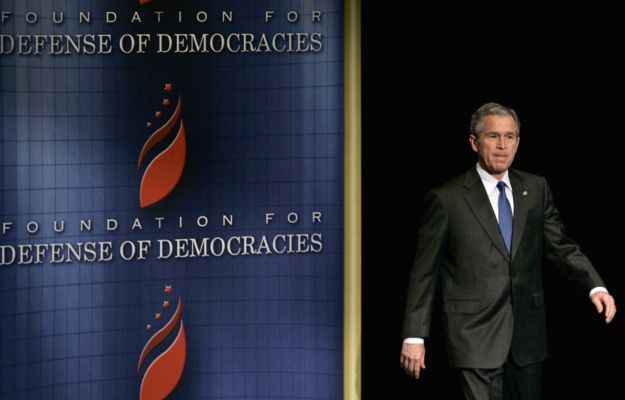 The more secretive tool the FDD has wielded to advance its regime-change dream has been to directly coordinate with the U.S. State Department. In documents obtained by the Quincy Institute and Protect Democracy, a non-profit organization, FDD senior fellow Saeed Ghasseminejad was hired as a contractor to help with the State Department’s now-defunct Iran Disinformation Project.

“The whole thing looked like a front for FDD and other regime-change hawks.

The Iran Disinformation Project was a $1.5 million attempt by the U.S. to engage in a series of virtual flame wars against Iranian officials while creating its own counter-propaganda to Iranian propaganda. The Quincy Institute found evidence of FDD and State Department officials meeting to discuss “communications,” and of an “FDD executive introducing Ghasseminejad to officials at the State Department’s Iran Action Group.”

“The whole thing looked like a front for FDD and other regime-change hawks.

FDD fellows have also used personal attacks against their critics in a last-ditch effort to delegitimizing opposition. While the Disinformation Project was still operating in 2019, it also made a habit of attacking critics.

When Israel and the UAE announced they were normalizing diplomatic relations, Marc Owen Jones, a Qatar-based professor, spoke out on the deal and was promptly lambasted by  FDD’s own Benjamin Weinthal. “You are a raging homophobe,” Weinthal wrote. “Marc ostensibly supports the execution of gays in Qatar,” and “you [Marc Owen Jones] are widely believed to be serving as a kind of foreign junior human resources department for Qatar’s homophobic regime.”

Taken in sum, these public and secretive moves reveal the avenues by which some think tanks like FDD utilize.

Their power born from a confluence of wealthy donors, governmental support, and institutional legitimacy, the intellectual-defense complex functions with little democratic accountability, even as it uses taxpayer money to advocate for greater human misery.

much of it constructing a hagiography of the U.S. Executive Branch’s virtuosity in the realm of international politics.

Erdogan Calls on Turks Not to Buy Any French Products