President Donald Trump and newly elected Prime Minister Boris Johnson are set to shape a more united foreign policy in the future, which may break away from the hawkish interventions in the Middle East and North Africa that have characterized most of their involvement abroad in the last two decades.

The Anglosphere will be increasingly united as the United Kingdom delivers Brexit, breaking away from continental Europe and negotiating a new trade deal with the United States. While this happens, they will find increasing common ground in foreign policy. Both the U.S. and U.K.'s leadership are pointing towards leaving neoconservativism behind after numerous direct interventions in the Arab world have resulted in failures abroad with disastrous repercussions at home.

the Anglosphere will have an increasingly unified foreign policy

Liberal-internationalist aims both countries once had have not have the intended benefits. As a result, realism with a defence of national interests in an increasingly unstable and hostile world appears to make more sense. A friendlier approach towards Russia with whom the West shares millenias of history, focusing on containing China's rising empire, particularly by supporting the ex-British colony of Hong Kong, and fewer counter-productive military interventions in the Arab world are defining the future American and British position on the international stage. 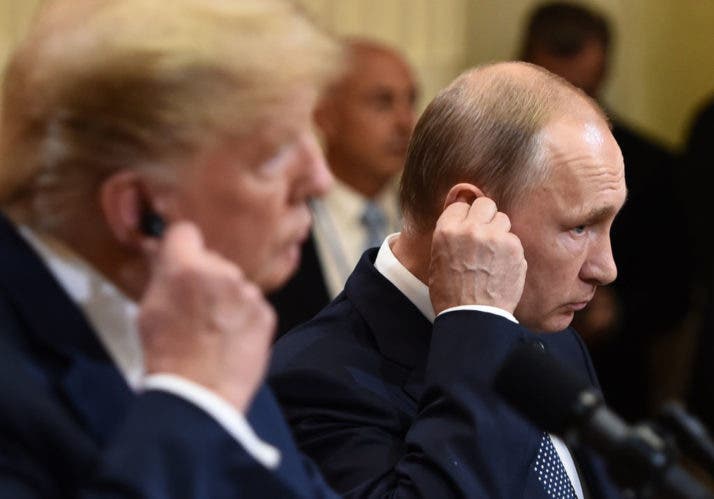 Just before his electoral victory, Johnson proudly said of Russia: “I am a Russophile, a committed Russophile (…) I’m certain that I’m the first foreign secretary in the history of my office to be called Boris.”

I am a Russophile, a committed Russophile (…) I’m certain that I’m the first foreign secretary in the history of my office to be called Boris xx

Paranoia over Russian interference after Britain’s vote to leave the E.U. was seen as ridiculous, especially after the Brexit vote was re-confirmed in the E.U. elections and in the U.K.'s last general election. Liberals who have used Russia as a scapegoat for losing the Remain vote and to plea for a second referendum on Brexit are forced to face the reality of their failings. Similarly, the Democratic Party in America, which accused Trump of colluding with Russia during his campaign, faced a humiliating defeat when Robert Mueller’s investigation came to the conclusion the crime they dreamed of hadn't been commited.

Now that Russian hysteria over interference with election results has been dismissed, Russia is no longer seen as an existential threat. Trump’s warmer approach towards Russian President Vladimir Putin during his election campaign and suggesting sanctions should be lifted on the country, which were put in place by Western powers during the Ukrainian revolution, is evidence of a new shift towards befriending, or at least letting go of many hositilities towards Russia.

Trump has furthermore expressed skepticism towards the North Atlantic Treaty Organization (NATO) numerous times, describing it as “obsolete." Johnson hasn’t directly shared this opinion, as the U.K.'s Conservative Party remains a staunch supporter of the Atlantic treaty. However, Johnson recently distanced himself from NATO leaders mocking Trump at Buckingham Palace.

Now that China is being seen as an existential threat, isolating Russia would mean pushing the country into Beijing's hands. NATO, therefore, is being contested on whether it stands up to the challenges of our age. Which brings us to the next point -- why China is on the agenda as the new imperial threat. 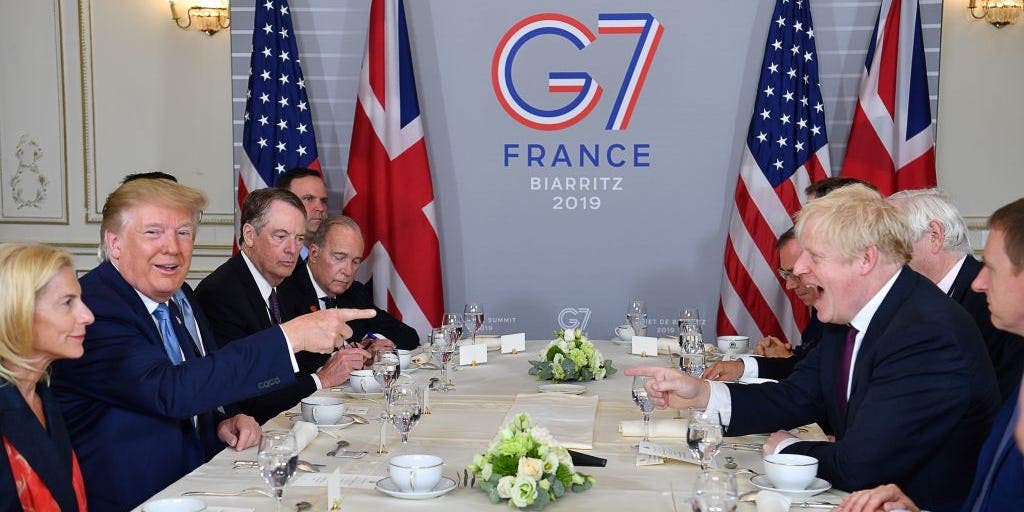 On China, both the UK and US appear to be on a similar page, but with some important differences. They favor reaching mutually beneficial trade agreements with Beijing, while also being concerned with China’s growing imperial power, especially as a totalitarian state. However, Britain is more open to investments from China, as it wants to deliver the best possible economic outcome after Brexit.

Trump has repeatedly said he “loves” China, and Johnson went even further by welcoming the largest number of Chinese immigrants in Europe. While Trump announced a new trade deal with Beijing on December 14th, Huawei -- the Chinese multinational technology company -- remains blacklisted in the U.S. amid concerns of its alleged links to the Chinese government and the likelihood it might gather American intelligence through its mass surveillance programmes.

“I don’t want this country to be unnecessarily hostile to investment from overseas but, on the other hand, we cannot prejudice our vital national security interests”

Whether Johnson will waver towards Beijing over 5G is yet to be seen as the UK is in more need of economic security after Brexit. Earlier this month, the British Prime Minister promised he would keep the controversial Chinese telecommunications company away from Britain’s 5G network if it risked compromising its work with major allies, like the United States. The statement came after pressure from the Trump administration. “I don’t want this country to be unnecessarily hostile to investment from overseas but, on the other hand, we cannot prejudice our vital national security interests,” Johnson said.

Overall, both Trump and Johnson have shown hostility towards China's growing imperial might. Trump has expressed his disapproval of China taking advantage of trade relations with the United States, going so far as to claim China was “raping” the American economy during his election campaign. In a leaked tape-recording last year when Johnson was foreign secretary, Johnson said: “China is a rival, but China is a rival whose growth and whose incredible developing power can be used to our advantage.”

Boris Johnson said of the Hong Kong protests: “Yes, I do support them and will happily speak up for them, every inch of the way."

Both countries are also supporting the Hong Kong protests, defying Beijing's request to stay out of its internal affairs. A former British colony, Hong Kong has seen more than six months of turmoil as protesters took to the streets against a Chinese extradition bill and police brutality. Some protesters were waving American and British flags in support of Western principles, such as freedom of speech and freedom of religion, that have made their autonomy unique against China's communist authoritarianism. The Trump administration recently passed the Human Rights and Democracy Act, a bill that would enforce a series of sanctions against Beijing if it failed to respect Hong Kong’s autonomy. Boris Johnson said of the Hong Kong protests: “Yes, I do support them and will happily speak up for them, every inch of the way." 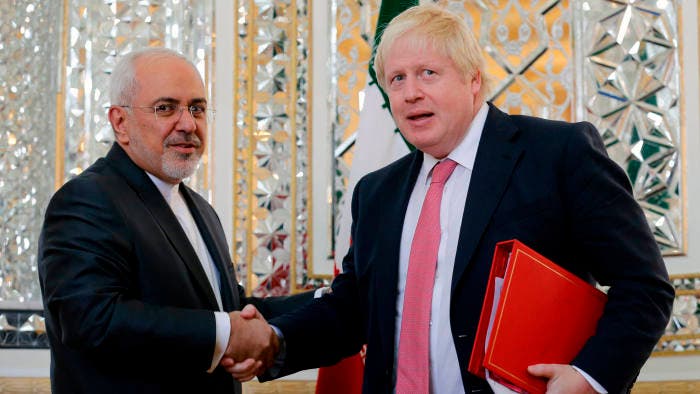 Both Trump and Johnson stress the need for a strong alliance with Israel. Trump has doubled down in his support towards Israel, going so far as to claim that American Jews who don’t support Israel are “disloyal”. Johnson’s victory in the UK election was received with relief by Israeli lawmakers who feared the rise of Labour leader Jeremy Corbyn, a man strongly opposed to Israeli settlements and who expressed support for Hezbollah and Hamas during his earlier political activism.

This likely means both leaders will continue to oppose Israel’s archenemy – the Islamic Republic of Iran – in the region. Johnson has already praised Trump for pulling out of the 2015 Iran deal, claiming: “Iran was and is behaving disruptively in the region”.

However, this doesn’t mean either country want further involvement with the conflicts in the Arab world. Trump had successfully pledged during his campaign that he would put an end to the “endless wars” America has been taking part in the Middle East and North Africa, claiming the Iraq war was a “huge mistake” and that military intervention in Libya proved to be a “disaster”.

While Trump appeared to betray his promise by militarily attacking the Syrian regime, he also retired his troops from Northern Syria and decided deposing Syrian President Bashar al-Assad was no longer a priority. In a dramatic shift in British foreign policy, Johnson also said as foreign minister that Assad should be allowed to run for re-election should a peace settlement be achieved in Syria.

In a dramatic shift in British foreign policy, Johnson also said as foreign minister that Assad should be allowed to run for re-election

A new foreign policy doctrine would take place if the United States and Britain strengthened their partnership under a new leadership. This policy would leave neoconservativism behind in a number of ways, namely by improving relations with Russia, containing China’s rise as an imperial power and engaging less in Middle Eastern and North African conflicts.