Published May 20th, 2020 - 10:18 GMT
Members of the al-Aqsa Martyrs Brigade in 2000 (AFP/FILE)
While regional leaders shuffled between meetings to devise responses to each other regarding Israeli annexation of the West Bank, shots rang out in the Jordan Valley.

On Wednesday May 19, two Jordanian gun smugglers tried to cross into Israel carrying over a dozen small arms. One was wounded by Israeli border forces while the other managed to escape back into Jordan.

The incident comes amidst rising tension between Israel and Jordan, as Israeli Prime Minister announced Israel would proceed with formally annexing the occupied West Bank. Jordan’s King Abdullah II responded by warning of a “massive conflict” between the two states.

It is unclear whether the foiled gun smuggling attempt is directly linked to the growing political crisis, but instances of gun smuggling appear to be on the rise since 2019.

Three thwarted attempts in Feb, April and Dec respectively prompted the Israeli military to release a statement saying they “were operating with increased vigilance against the smuggling, possession and use of illegal weaponry.”

On top of that, two Jordanians were arrested after plotting to attack an Israeli border station in March, 2019. The court ruling indicated they were motivated due to the U.S.’ decision to recognize Jerusalem as the sole capital of Israel in late 2017.

Individually, these small episodes rarely receive sustained international attention. But together, they form the backdrop of simmering tension between Israel and Jordan—a relatively stable relationship that appears to be coming apart at the seams.

together, they form the backdrop of simmering tension between Israel and Jordan—a relatively stable relationship that appears to be coming apart at the seams.

Netanyahu’s annexation plans have the blessing of the U.S., but few else, even as Israel commits to normalizing relations with Gulf states. Since Trump’s inauguration, Jordan has grown increasingly isolated from all sides.

Jordan’s veiled military threat that it is “considering all options” to respond to Israel will likely be dismissed by the U.S. and Israel, but make no mistake: the Palestinian issue is deadly serious for Jordan. Its very stability rests on it. Israel’s sprawling settlement of the occupied West Bank was jumpstarted by its decisive victory in the 1967 war. Over the decades, more Israeli settlers have populated the West Bank territory, turning it from a contiguous land-mass to an archipelago of contested sovereignties, even as much of it remains formally under the control of the Palestinian Authority (PA).

But the PA has steadily grown corrupt and disconnected from Palestinians’ grievances as it relies on Israel for security coordination and tax revenue. It has now become a kind of pressure valve to maintain a semblance of political order: a way to officiate Palestinian grievances into acceptable channels without ever undermining Israel’s baseline power or seriously resisting Israeli settlements.

But the PA has steadily grown corrupt and disconnected from Palestinians’ grievances as it relies on Israel for security coordination and tax revenue.

With Palestinian political power curtailed under the guise of an indefinitely suspended “two-state solution,” Israel has de facto annexed much of the West Bank.

There are upsides for Israel extending de facto control over the West Bank without ever formally annexing its parts; Netanyahu avoids the outcry from the international community, Jordan, and even the Palestinian Authority.

It has proved to be a sustainable way of extending Israeli control over the Palestinian territory.

The only upsides to formal annexation appear ideological, something Netanyahu seems to know. “It’s time to apply the Israeli law and write another glorious chapter in the history of Zionism,” Netanyahu said in a speech to Israel’s parliament in mid-May after he was sworn in as Prime Minister for an historic fifth term.

Over the decades, more Israeli settlers have populated the West Bank territory, turning it from a contiguous land-mass to an archipelago of contested sovereignties.

“We already have security control [in the Jordan Valley],” retired Major General Amos Yadlin, the head of the Institute for National Security Studies in Tel Aviv, told Foreign Policy.

“Annexation won’t change anything, our legitimacy there will decrease, and only one country in the world will support it—and even that may change with a new American president,” added.

“There’s only an ideological interest here, with only economic and diplomatic downsides.”

This appears to matter little to the U.S., which signaled its willingness to recognize Israeli sovereignty. The only matter left to do is have the annexation legally acknowledged.

Chance for Peace on the Wane 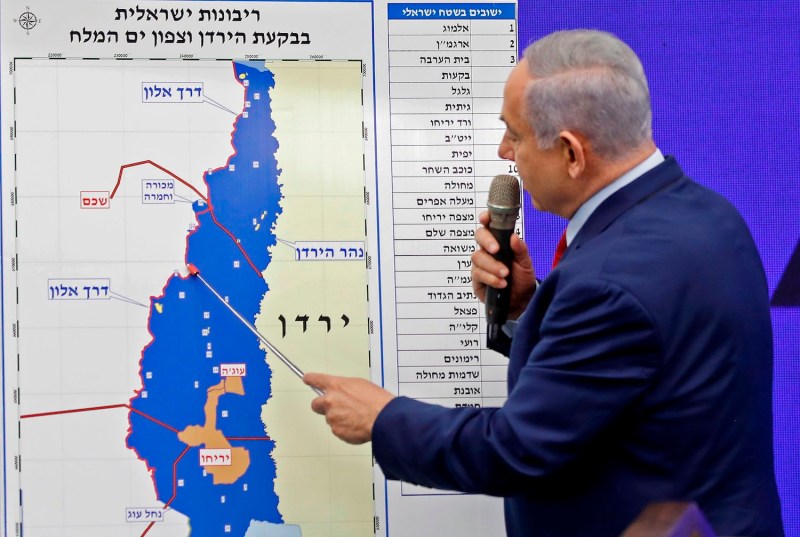 The Palestinian leadership’s reaction has been predictable, although analysts argue the PA leader Mahmoud Abbas’ newfound fervor is noteworthy.

Abbas recently announced that the PA is ending its agreements with Israel and the U.S. “The Palestine Liberation Organization and the State of Palestine are absolved, as of today, of all agreements and understandings with the American and Israeli governments,” Abbas said.

The threat, if it is actually carried out, could spell the imminent end of the PA, since it heavily relies on security coordination with Israel to maintain stability. At one point, he even called the PA’s security relationship with Israel “sacred.”

And because the PA also depends on tax collection from Israel, an end to that arrangement would immediately cut PA’s revenue in half.

The PA cannot function without cooperation from the Israeli government and military, meaning if it were to genuinely rid itself of its connections and agreements with Israeli, it would have to quickly restructure itself to achieve financial and military self-sufficiency without inviting a direct military response from Israel.

With nearly half of his country made up of Palestinians, annexation is a domestic crisis as much as a foreign policy issue.

An Aging and unpopular Abbas would have to transform his obsolete hollow state apparatus, that was designed in 1994 as a temporary one, into a genuine government. That appears nearly impossible, especially as it remains deeply unpopular with Palestinians.

But Abbas knows any official Israeli sovereignty recognition threatens the very existence of the PA, which is made to usher in a Palestinian state.

It is possible for armed confrontation between Palestinians and Israelis if annexation were to occur, and Abbas could be incentivized to try and mobilize Palestinian militias like Tanzim or al-Aqsa Martyrs' Brigades.

With nearly half of his country made up of Palestinians, annexation is a domestic crisis as much as a foreign policy issue.

“Leaders who advocate a one-state solution do not understand what that would mean. What would happen if the Palestinian National Authority collapsed?” He asked in an interview with Der Spiegel. “There would be more chaos and extremism in the region,” he answered.

As both Abdullah and Abbas find themselves isolated in the region and with less leverage than ever, the chances for political mediation are decreasing, and the chance of a military crisis are growing.

Jordan has already ended a land-sharing agreement with Israel, but is running out of negotiating power with either the U.S. or Israel. At the same time, Jordan cannot realistically afford to be directly involved in a military spat with Israel, since it depends on the U.S. and Gulf states for aid and trade.

The political cleavages of a U.S. and Gulf-backed Israel, a distant Europe, and a pressurized Jordan/PA are stifling.

Close attention must thus be paid to those incidents of gun smuggling, foiled plots, and episodic violence, since they may be coming in greater frequency as 2020 drags on.

While regional leaders shuffled between meetings to devise responses to each other regarding Israeli annexation of the West Bank, shots rang out in the Jordan Valley.
more and more

Chrissy Teigen Reveals She is working on New Cookbook

Kuwait Starts Laying Off Expats Working in the Public Sector

Jade Thirlwall Takes a Look Back at Old Childhood Photos