Published October 11th, 2021 - 08:06 GMT
A Taliban fighter mans a machine gun mounted on a vehicle near the venue of an open-air pro-Taliban rally on the outskirts of Kabul on October 3, 2021. (Photo by Hoshang Hashimi / AFP)

The United States and the Taliban held chats during the weekend which were the first since the completion of the US military withdrawal from Afghanistan, with the militant organization stating late Sunday that Washington has agreed to provide Afghans with humanitarian aid. 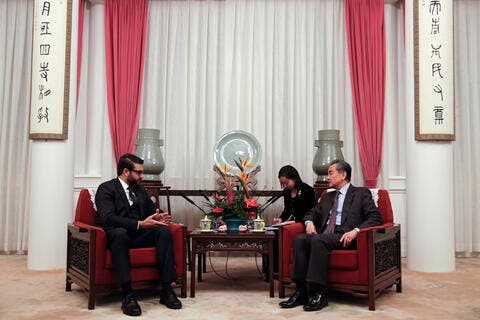 The Taliban's foreign ministry said in a statement that the U.S. side agreed to provide Afghans with humanitarian assistance and will "provide facilities for other humanitarian organizations to deliver aid."

The Taliban "welcomed this assistance and remarked that it will cooperate with charitable groups in delivering humanitarian assistance to those deserving transparently, and will facilitate principled movement of foreign nationals," the ministry said.

The two-day talks in Doha, Qatar, over the weekend was the first diplomatic meeting between the two sides since the United States exited Afghanistan in late August after the Middle Eastern country earlier that month had fallen to the Taliban amid the U.S. military withdrawal.

The State Department issued its own statement earlier Sunday, in which it described the talks as "candid and professional."

However, it also warned that the militant organization "will be judged on its actions, not only its words."

"The U.S. delegation focused on security and terrorism concerns and safe passage for U.S. citizens, other foreign nationals and our Afghan partners, as well as on human rights, including the meaningful participation of women and girls in all aspects of Afghan society," the department said.

Concerning the offer of aid, the department said they discussed "the provision of robust humanitarian assistance, directly to the Afghan people," without stating an agreement had been made.

Taliban political spokesman Suhail Shaheen said the movement’s interim foreign minister assured the US during the talks that the Taliban were committed to seeing that Afghan soil is not used by extremists to launch attacks against other countries.https://t.co/UI34WueHB2

The Taliban, in its statement, said that detailed discussions were held on "all relevant issues" and that "efforts should be exerted to restore diplomatic relations to a better state."

"The meeting in which talks were candid was considered a good opportunity of understanding and it was agreed that such meetings will continue to be held in the future if required," it said.