Published May 2nd, 2021 - 05:01 GMT
People light candles during a vigil in Habima Square in the Israeli coastal city of Tel Aviv on May 1, 2021,in the aftermath of a deadly stampede in a northern Jewish pilgrimage town. The the overnight disaster killed at least 45 people at an Orthodox Jewish pilgrimage site, one of the nation's worst peacetime disasters. JACK GUEZ / AFP
Highlights
In total, 45 people were killed as worshippers tripped and fell on a packed staircase at Mount Meron on Thursday.

A British man has today been named as among the victims of a stampede at a Jewish pilgrimage site that tragically left 45 people dead after hundreds of worshippers became trapped in an overcrowded passageway in Israel. 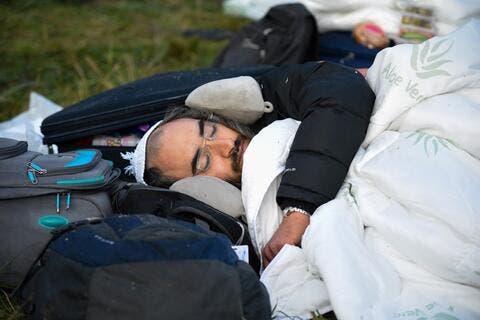 The bodies of 32 people killed in the crush at the Lag B'Omer festival, near Mount Meron, have so far been identified, including a 24-year-old from Manchester named as Moshe Bergman.

Others killed include two brothers, Moshe Natan Englander, 14, and Yehoshua Englander, 9, from Jerusalem, though Israel's Health Ministry has confirmed some identifications may require DNA, finger printing and dental testing.

Dr Chen Kugel, director of the National Center of Forensic Medicine, said: 'We are working hard, but you have to understand that this is a complex and sensitive process,' adding the work must be done 'responsibly.'

According to the Jewish News, Bergman was studying at the Mir Yeshiva in Jerusalem.

His death was reportedly confirmed by the UK Charedi community leaders after his family made desperate appeals for information on his whereabouts.

The bodies of those killed at the religious festival were taken to the Greenberg Institute of Forensic Medicine in Tel Aviv. Some funerals have already taken placed, with that of Rabbi Elazar Goldberg among the first.

It comes as it was today suggested that religious leaders had put pressure on organisers of the Lag B'Omer festival not to limit numbers, as it emerged more than 100,000 people had been in attendance.

A total of 45 people were killed during Lag B'Omer festivities at Mount Meron, Israel, on Thursday as worshippers tripped and fell on a packed staircase in what quickly became a deadly crush.

Reports from 2008 and 2011 had warned large numbers posed a 'danger to human life' and advised that capacity should not exceed 15,000.

There have been talks of a potential state commission of inquiry following the disaster, with questions likely to be posed to those involved in planning, approving and securing the event.

Those familiar with the investigation told the Israeli Channel 13 how ministers had allegedly asked police to ensure large numbers would be able to enter the burial site of Rabbi Shimon bar Yochai.

This allowance was in a bid to compensate for the cancellation of last year's event, which was axed due to Covid-19, the Times of Israel reported.

Burials for the victims of a stampede at a Jewish pilgrimage site will continue on Saturday evening at the end of the Sabbath, the Jewish day of rest. https://t.co/5MLnptVYGq

The head of Shas, a Haredi religious political party in Israel, allegedly wrote to Public Security Minister Amir Ohana ahead of the festivities saying that 'anyone who wants to come [to Meron] should be allowed to do so.'

It is alleged that Ohana then approved the request, and consequently no limits were placed on the number of attendees at Meron despite fears over Covid infections.

However, according to Kan News, insiders from Israel Police's Northern District have blamed the Religious Affairs Ministry for the tragedy. It was claimed there was 'political pressure on police to hold the event at any cost.'

The source added: 'There is no other event in Israel that police approve without an overall producer [who takes responsibility for attendants' security.]

'It's the greatest mass gathering in Israel. In no other event does the political pressure on police come close to the amount of pressure [brought forth] to hold the Meron event.'

So far, only one person has taken responsibility for the disaster, which left at least 150 people with injuries - including six who are in a critical condition.

Northern District Commander Shimon Lavi, who took charge of security for the Lag B'Omer festival, said yesterday: 'I bear overall responsibility, for better or worse, and am ready for any investigation.'

He called for an independent probe to be mounted, but added that the crush was 'definitely not' the responsibility of individual officers who he praised for going into the crowd to help the wounded and dying.

It comes as it emerged today that a report written 13 years ago warned safety features were lacking in preventing overcrowding at Mount Meron on Thursday.

Ex-comptroller Micha Lindenstrauss said the site was unable to manage numbers larger than 15,000 people, according to the Jerusalem Post.

He also told of 'dangers to human life' due to a lack of responsibility.

A separate report in 2011 said: 'The existing situation must be immediately changed - including ending the abandonment and harm to the holy place.'

Safety guidelines advised that a maximum of 15,000 people should be allowed at any one time. Current comptroller Matanyahu Englma said a more comprehensive investigation may be launched after the stampede.

Victims of the tragedy have begun to be identified as Israel comes to terms with one of the worst peace-time disasters in its history.

Among those killed were two pairs of brothers: Yosef and Moshe Elhadad, 18 and 12, and Moshe and Joshua Englander, aged 14 and 9; Shraga Gestetner, a rabbi and signer from Montreal; two Americans: Yosef Amram Tauber, from New York, and 26-year-old Eliezer Tzvi Yoza'af; and Shimon Matalon, 38, a father-of-11.

Funerals immediately got underway in keeping with Orthodox tradition, with large crowds taking to the streets of Jerusalem to honour Rabbi Eliezer Goldberg, a 37-year-old father-of-four, with ceremonies in Bnei Brak for Menahem Zeckbach, who leaves behind a pregnant wife and one-year-old child, and Moshe Ben Shalom, 20.

In total, 45 people were killed as worshippers tripped and fell on a packed staircase at Mount Meron on Thursday.

At least 150 were hurt including six in critical,  18 seriously hurt, eight in moderate condition, and 80 lightly injured - though some Israeli media reported up to 28 in critical.

Some witnesses said police barriers had blocked or restricted an exit from the festival site, leading to a deadly 'domino effect' - described by one witness as a 'human avalanche'.

'There were just more and more and more people,' one witness told local station KAN 'I remember that I lay on top of someone. He wasn't breathing.

'There were screams; a mess. Each one trying to get out from the other, but they didn't succeed in getting anyone out because it was a puzzle. I saw people, children, under me.'

But police sought to downplay blame amid calls for an inquiry.

Officers pointed out that up to 100,000 people had attended the festival, which is far fewer than in previous years but far more than had been anticipated this year amid ongoing Covid restrictions.

Police had warned of over-crowding even before the stampede took place, telling late-comers to stay away.

Parts of the site, including an area where traditional bonfires are held, had been limited to just 10,000 this year with barriers in place to try and restrict the numbers.

Gatherings elsewhere in Israel are still limited to 100 people, but an exception had been granted for Lag B'Omer - a festival celebrating the life of Rabbi Shimon Bar Yochai.

It was the largest event to have been held in Israel since Covid restrictions started to ease following the country's world-beating vaccine drive.

During lockdown, there had been friction between the Israeli government and Orthodox Jewish community which continued to hold mass events despite the restrictions - including the funerals of two rabbis back in January.

Queen Elizabeth II sent a message of condolence to the President of Israel Reuven Rivlin following the disaster, saying: 'I was deeply saddened by news of the disaster at the Lag B’Omer festival in Meron, Israel.

'My thoughts are with all those who have been injured, and the friends and families of those who lost their lives. They have my deepest sympathies.'

On Twitter, Israeli Prime Minister Benjamin Netanyahu called it a 'heavy disaster' and added: 'We are all praying for the wellbeing of the casualties.'

'What happened here is heartbreaking. There were people crushed to death, including children.'

Israeli rescue service Magen David Adom said over 250 ambulances and helicopters had been called to the site to help rescue the wounded, including helicopters of the Israeli Air Force.

The chaos was further compounded when mobile phone services set up at the site crashed, leaving people unable to call for help and separating children from their parents.

Closed last year due to coronavirus restrictions, the pilgrimage drew thousands of people who were seen packed together joyfully singing, dancing and lighting bonfires before the deadly crush.

In a cruel irony, the B'Omer holiday celebrates the end of a plague that killed thousands of Talmudic students at the time of Rabbi Bar Yochai.

'This year, as we continue to inch closer to the end of a modern-day plague, I encourage everyone to find meaning and joy in celebrating the end of a different plague that occurred many years ago,' a rabbi wrote in the Jerusalem Post before Friday's tragedy.

Shachar Ba'al Haness, 19, a survivor of the crush, said he was among those that fell to the floor in the crush but remained conscious even as those around him were crushed to death.

'I saw all the bodies. I saw bodies on me, under me. I thought I was going to die,' he said.

'We were going in to see the bonfire lighting, suddenly there was a wave coming out. Our bodies were swept along by themselves. People were thrown up in the air, others were crushed on the ground,' David, a survivor, told the Ynet news site.

'There was a kid there who kept pinching my leg, fighting for his life. We waited to be rescued for 15-20 minutes in this crazy, terrible crush. it was awful.'

'A policeman pulled me out,' Meir, who was lightly injured, said from his hospital bed. 'He protected me and made sure I would not be trampled on until I was evacuated.'

'It felt like an eternity, the dead were all around us.'

Another survivor, Zohar, told Channel 12: 'We were walking out, everything was flowing, suddenly it stopped.

'Everyone was pressed up against each other and we did not understand why. I lifted up my head and I saw police blocking the entrance, I shouted to them "people are dying here."' 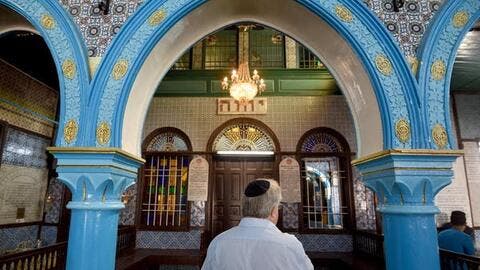 'People lost the color in their faces. I was under the bleachers, I tried to go up toward all the chaos when I heard banging above, thud, thud, and people shouting "escape, escape, people are dying."'

'People fell from above and crushed each other, they squashed each other. people just fell, I will never forget the banging sounds, people flying all over.'

WHO Approves Moderna for Emergency Use