Whose Fault is the Cholera Epidemic in Yemen? 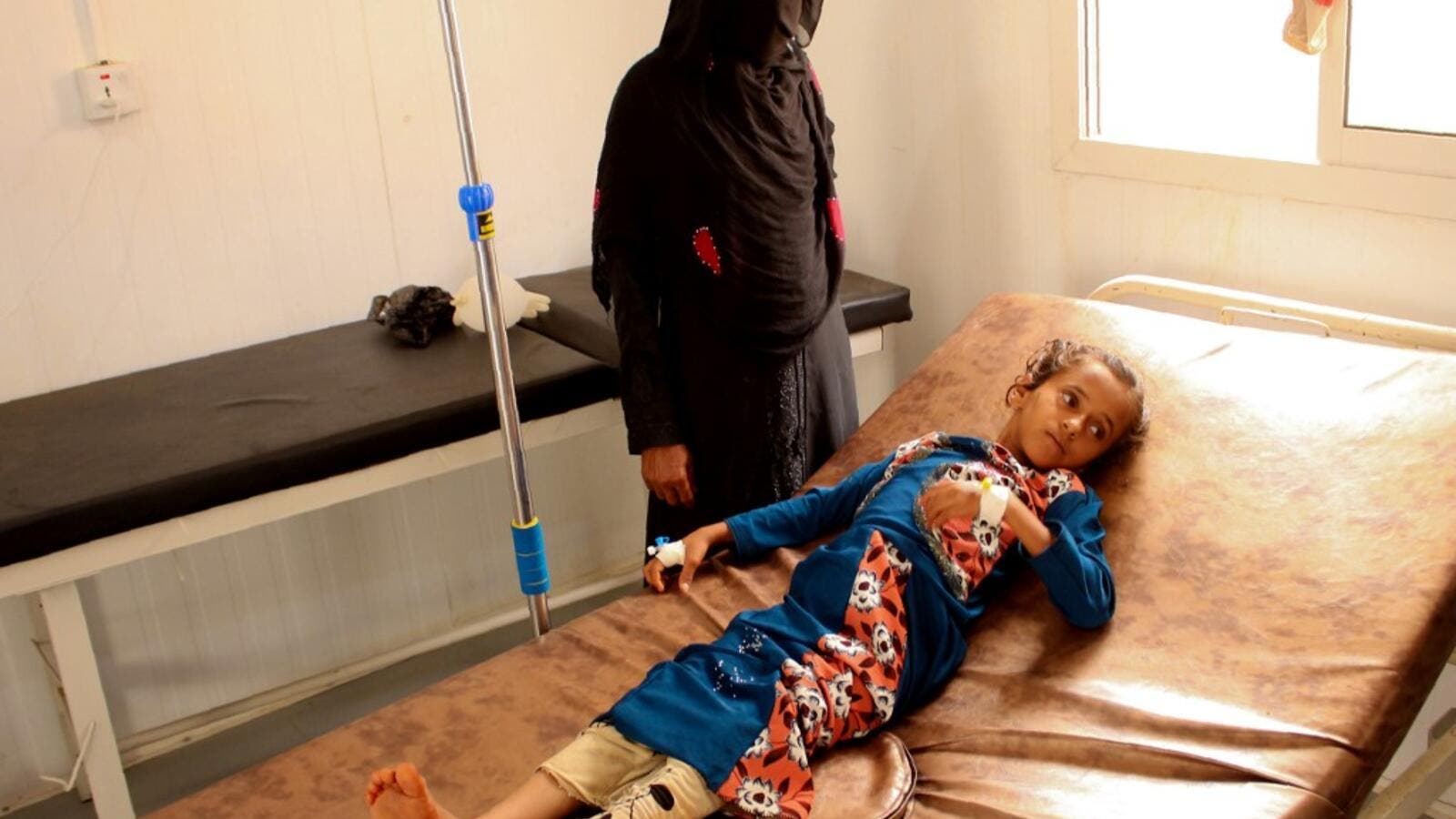 Cholera is a disease that drains you from within. It’s often caused by food or water supplies that are contaminated with bacteria. Once an individual is infected with cholera, they become dehydrated: they suffer constant bouts of diarrhea and vomiting. Muscles cramp up, a fever develops and heart rate jumps in attempt to fight off the illness.

Without access to clean water, an individual with cholera can go into shock after just 18 hours, and can die in a few days. Like most deadly diseases, children are the most vulnerable group to become infected with the sickness and to die from it.

It’s a dangerous disease, and Yemen is currently suffering from the worst outbreak of cholera in modern history.

That’s on top of the 1.2 million cases already reported from 2016 until today. Combining these numbers, Yemen is forecasted to have faced around 2 million cases of cholera in four years, which amounts 6.8 percent of the total population.

Combining these numbers, Yemen is forecasted to have faced around 2 million cases of cholera in four years, which amounts 6.8 percent of the total population.

Already, about 3,000 Yemeni people have died from cholera since the epidemic began.

So who bears responsibility for this outbreak, which is spreading in the midst of a brutal war between a government backed by powerful international players and the rebel Houthi group backed by Iran?

Actually trying to find out who is behind the outbreak is a difficult task.

On one hand, most media outlets in the Middle East are state-run, and most of those states are a warring party to the conflict, so the information they choose to provide is mostly for propaganda purposes. On the other, independent international outlets rarely cover the Yemen conflict, because it remains a niche issue with only pockets of interests despite the fact that it’s suffering the world’s worst humanitarian catastrophe right now.

On the other, independent international outlets rarely cover the Yemen conflict, because it remains a niche issue with only pockets of interests despite the fact that it’s suffering the world’s worst humanitarian catastrophe right now.

In both cases, it does not pay to accurately report on the war in Yemen or its human cost, so the conflict goes on in obscurity, with few ever knowing anything about it.

Attempting to assess culpability for the outbreak; however, is instructive to understanding how each warring party conducts itself in the war. So here, we’ve broken down the roles of the Saudi-led coalition, its international backers, the Houthis and Iran in exacerbating the cholera outbreak.

Though the Saudi-led coalition may bear the most responsibility, every other actor involved in the war has significantly contributed to the spread and lethality of the disease.

Patients at a cholera treatment facility in Hodeidah on April 18, 2019 (Khaled ZIAD/AFP)

The Saudi-led coalition, comprised mostly of Saudi and the U.A.E., engineered the disastrous humanitarian situation in Yemen as part of a medieval war strategy.

By targeting water treatment centers and blocking off aid, cholera has become one of the conflict’s quiet killers.

In March 2015, the Saudi-led coalition invaded Yemen. In Oct 2016, the first cases of cholera began streaming in.

Saudi and the U.A.E. began their intervention with an overwhelming show of force. The coalition targeted elements of the Houthi’s breakaway state with implosive bombs that crumbled buildings within themselves. These bombs were part of a ‘shock and awe’ campaign to signal that Houthi resistance to the coalition would be fatal and that surrendering is their only strategic move.

They wanted to show the Houthis the terror of resisting. Despite several waves of high-volume bombings across Houthi-controlled territory, the strategy failed. The coalition then shifted to targeting civilian infrastructure, including water irrigation systems and farms.

The coalition initially blamed MSF for not notifying them that their target was actually a hospital for cholera patients, but MSF retorted, saying they had actually told the coalition on twelve separate occasions that the building was a hospital. Just one month later, in July 2018, Saudi airstrikes struck health, sanitation and water treatment centers in Hodeidah, Yemen’s port city and main lifeline for the majority of its people.

Cases of cholera spiked immediately after the July 2018 bombings, as cholera-causing bacteria festered in Yemen’s stagnant and dirty water supply.

Concurrent to the bombing campaign that started in March 2015, the coalition also began enforcing an on-and-off blockade around Yemen that continues to this day.

Workers in Hodeidah offload a ship onto the dock (AFP/FILE)

At one point in Nov 2017, the coalition imposed a total blockade over Yemen’s air and sea ports, preventing the shipment of vital food and medicine into the country. In the months leading up to the announcement, the coalition was imposing a de facto blockage of vital goods that choked off medical access. An Oct 2017 Reuters report found that no commercial pharmaceutical shipment had arrived in Hodeidah since August 2015.

Despite insistences from coalition officials that they lifted the total blockade a few weeks after serious international pressure mounted, ships were still being denied entry months after.

The blockade appears to be continuing into the present day: a French intelligence report that was leaked in April 2019 found that the U.A.E. has been stopping imports into the country with warships provided to them by France.

These actions have destroyed Yemen’s ability to provide basic care for its own people while undermining international efforts to manage the humanitarian crisis, including the cholera epidemic.

The Saudi-led coalition’s main backers are the U.S., U.K. and France, who share the coalition’s core strategic goal of preventing Iran from gaining any influence in Yemen.

Because of this shared goal, all three have enabled the coalition to continue its invasion and blockade with a steady stream of high-tech arms and intelligence.

The U.S. has provided over $89 billion in arms to Saudi Arabia in the last 11 years, and until recently, was providing mid-air refueling services to coalition jets so they could bomb targets much faster.

The U.S. has provided over $89 billion in arms to Saudi Arabia in the last 11 years, and until recently, was providing mid-air refueling services to coalition jets so they could bomb targets much faster.

The U.S. also funneled intelligence reports to the coalition, including information on particular areas that the coalition then battered with airstrikes.

According to the Stockholm International Peace Research Institute, the U.K. and U.S. account for 84 percent of the world’s total arms exports to Saudi Arabia, with the U.S. exporting 61 percent and the U.K. exporting 23 percent.

French-manufactured tanks, artillery guns and warships have formed a major element of the coalition’s war effort in Yemen as well.

The leaked French intelligence report found that “The Saudis have stationed French long-range artillery guns along its border, capable of firing deep into Yemen’s northern governorates, while the Emiratis have piloted French multiengine fighter planes, equipped with French laser-targeting technology. And both Saudi Arabia and the U.A.E. have used French warships to enforce the coalition blockade against the country.”

The U.S., U.K. and France have individually proclaimed their dedication to human rights in light of the Yemen catastrophe, but have not seriously altered their support scheme to the Saudi-led coalition.

As a result, they continue to exacerbate the cholera crisis, while providing international legal cover to perpetrators on the ground.

The Houthis, a breakaway rebel group in the country’s northwest are responsible for exploiting the humanitarian situation for war-trime profiteering and local power plays.

They’ve done so primarily by denying mass shipments of life-saving cholera vaccines while stealing aid shipments and selling them on the black market.

In the summer of 2017, when the cholera crisis was spreading rapidly, a U.N. plane stocked with half a million cholera vaccines waited to receive clearance to land in Yemen. Houthi officials reportedly denied the plane entry, preventing the shipment of vaccines from reaching Yemeni civilians.

“The Houthis are taking advantage of U.N. weakness,” an aid official said. “Corruption or aid diversion and all of this are because of the U.N.’s weak position.” Aid workers know that if the U.N. speaks out, “their visas will be denied and they would not be allowed back in the country.”

In addition to directly blocking vaccines, Houthi fighters have also systematically funneled much of what little aid reaches their territory into black markets for a profit, an investigation by the World Food Program (WFP) found.

In addition to directly blocking vaccines, Houthi fighters have also systematically funneled much of what little aid reaches their territory into black markets for a profit, an investigation by the World Food Program (WFP) found.

“The misappropriation of food relief came to light in a WFP review conducted during recent months. It was prompted by an increasing number of reports of humanitarian food for sale on the open market in the capital. What the checks unearthed was fraud being perpetrated by at least one local partner organisation tasked by WFP with handling and distributing its food assistance,” the WFP said.

“At a time when children are dying in Yemen because they haven’t enough food to eat, that is an outrage,” WFP’s director David Beasley said.

“This criminal behavior must stop immediately.”

Diverting aid into black markets has undoubtedly worsened the humanitarian crisis in Yemen, and weakened an already-vulnerable population even further. It likely makes cholera more deadly, as it infects malnourished, dehydrated individuals.

Houthi fighters and militia leaders have contributed to acute deprivation in food and water-scarce regions under their control and show no serious dedication to alleviating humanitarian conditions.

The Houthis’ main international supporter is Iran, who appears to support the rebels as a way to entangle their geopolitical rivals, namely the U.S. and Saudi, in an unwinnable proxy war.

The Houthis have also deployed Bukran-1 and Bukran-2 scud missiles, which are essentially identical to the Iranian-produced Qiam-1.

Though Iran’s military and logistical aid to the Houthi group is small in comparison to the assistance the coalition receives, it still helps the Houthis enforce their rule in the country’s northwest and continue the conflict indefinitely.