Published July 20th, 2022 - 10:35 GMT
The final two candidates to become UK prime minister will be decided today, with Sunak only two votes short of securing his place after yesterday's voting. (Photo by JUSTIN TALLIS / AFP)
Highlights
Rishi Sunak wins 4th round of voting, bringing him closer to being among 2 candidates who will go head-to-head to be elected as new British premier

Following British Prime Minister Boris Johnson's resignation as leader of the ruling Conservative Party, Rishi Sunak, one of the lawmakers competing for the party leadership and prime minister's seat, won another round of voting Tuesday, bringing him one step closer to possibly becoming the first person of Indian origin to occupy the UK’s top post. 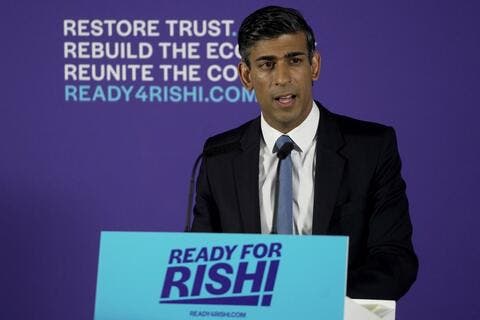 After Johnson stepped down on July 7 as a result of a series of events, including resignations in his Cabinet and party, the 358 deputies of the Conservative faction in the House of Commons began the process of electing its new leader and prime minister.

Rishi Sunak directly linked with the Srebrenica revisionists of the RCP: https://t.co/kafboJZ2oW

Sir Graham Brady, chairman of the 1922 Committee, an influential group of Conservative backbench ministers in the UK, on July 12 announced the top eight candidates in the race to replace Johnson.

A candidate has to be nominated by at least 20 members of parliament (MPs) to make the ballot and candidates must get the backing of at least 30 MPs in the first round vote. Anyone with the backing of fewer than 30 will be eliminated.

The election rounds will continue by eliminating the deputies with the fewest votes until the last two candidates remain and Conservative members of parliament will decide between the final two candidates in a postal ballot. The results are expected on Sept. 5.

Sunak was the candidate with the most votes in round one, at 88, while Mordaunt received 67, Truss 50, Badenoch 40, Tugendhat 37 and Braverman 32.

Hunt and Zahawi fell short of the required 30 votes and were disqualified.

Sunak garnered 101 votes in the second round, followed by Mordaunt with 83, Truss with 64, Badenoch with 49, and Tugendhat with 32.

Braverman received 27 votes, falling short of the 30-vote requirement, and withdrew from the leadership race.

In the third round, Sunak earned 115 votes, followed by Mordaunt with 82, Truss 71, Badenoch 58, and Tugendhat 31. Due to receiving the fewest votes in this round, Tugendhat was knocked out of the leadership race.

In the fourth round, Sunak received 118 votes, Mordaunt 92, Truss 86 and Badenoch 59. Due to receiving the fewest votes, Badenoch was eliminated.

Three candidates remain in the race – Sunak, Mordaunt and Truss.

On Wednesday, one more round of voting will be held to eliminate one candidate, leaving just two contenders for the top position in the party. After that, they will campaign across the country before party members vote on the winner.

The winner of the Tory leadership contest will be announced on Sept. 5 and automatically become the British prime minister.

Pharmacist Usha and general practitioner Yashvir, who emigrated to England from Africa in the 1960s, met in this country and got married. Rishi Sunak, the eldest of the Sunak family's three children, was born on May 12, 1980 in Southampton, England.

Sunak began his political career in 2015 after getting elected as a member of the Conservative Party's Richmond seat in London after working in the banking sector following his undergraduate studies.

Sunak has been involved in politics since 2015, holding the position of finance minister from 2020 to July 5 this year and chief secretary to the Treasury from 2019 to 2020.

The idea of an Indian-origin politician becoming prime minister in England, where Anglo-Saxon lawmakers have held the position for a long time, was raised by Sunak's dominance in the fight for party leadership and prime minister's seat in all four rounds.

In addition to being one of the party's most well-known and youthful members, if Sunak wins the election, he will be the nation's first non-white prime minister.

Following the nomination of the candidates, around 160,000 Conservative Party members across the country will select one of the two contenders as the new prime minister and head of the party.

On Sept. 5, after the election, the new leader of the post-Johnson party and the new occupant of the Prime Minister's residence -- No. 10, Downing Street -- will be revealed.