UN representatives held talks in New York on Monday to mark the first anniversary of the Abraham Accords, which are a series of agreements by four Arab countries to normalize their relations with Israel. 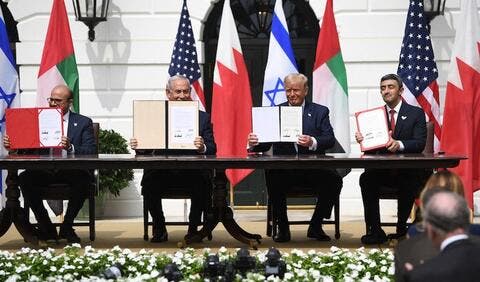 Don't Use The ‘Abraham Accords’ - A US Directive

During the event, at the Museum of Jewish Heritage in Manhattan, representatives to the UN from the signatory nations hailed the “incredible achievement” of the accords. Dozens of ambassadors and other officials from countries across the Arab world, Europe, and elsewhere also took part in the event, which Arab News attended.

The UAE was the first Arab country to sign up for the accords, which signaled a new era of political, economic and cultural ties between Israel and some of its Arab neighbors.

One year after the signing of the Abraham Accords, the relationship between the UAE and Israel is stronger than ever.

Learn how the historic normalization is being felt across the Middle East: https://t.co/nUwOCUGFWx pic.twitter.com/pJ9E8D2vIq

Lana Nusseibeh, the UAE’s permanent representative to the UN, told the gathering: “One year ago, at the signing of the accords at the White House, my foreign minister, His Highness Abdullah bin Zayed Al-Nahyan said: ‘I stand here today to extend the hand of peace and receive the hand of peace.’

“And this extending of hands certainly has been mutual between the countries represented here today. For us, the United Arab Emirates, the peace with Israel has been a warm peace.”

Nusseibeh said that the anticipated new investments, academic partnerships and joint research initiatives resulting from the agreement have already begun, but added: “What we perhaps did not anticipate, and what we have been inspired to witness, is how the creativity and curiosity of our people truly united once the political elements had been removed.”

Gilad Erdan, Israel’s ambassador to the UN, said the accords should be celebrated as an “incredible achievement” between countries with aligned interests. They allow the signatories to “face the larger challenges to the Middle East with a united front,” he added.

“Our peoples are learning each other’s languages and realizing how much the sons of Abraham truly have in common, as they share kosher meals in Manama and Marrakesh,” said Erdan. “I strongly believe that as others in the region see the fruits of our partnership and feel this transformation, they will join our circle of peace.

“Perhaps even the Palestinians, if they see the benefits of our peace and the prosperity it brings, will see these accords as an opportunity, not a threat.”

He also praised the US for its role in facilitating the agreements and hailed the bipartisan support from across the American political spectrum.

The permanent representatives to the UN from Bahrain and Morocco, which followed the UAE’s lead last year and agreed to normalize their relationships with Israel, praised the accords and highlighted the variety of ways in which their economies and cultures have benefited.

Linda Thomas-Greenfield, the US Ambassador to the UN, also hailed the anniversary of the agreements, which she said have the full support of President Joe Biden.

“Perhaps what is most remarkable is that we have gone from ink on a page to concrete improvements between countries,” she said, citing in particular the diplomatic and economic advances made by the UAE and Israel.

She thanked all the signatories for “choosing the path of peace,” but also reiterated that the Biden administration continues to firmly support a two-state solution to the decades-long conflict between Israel and the Palestinians.

“I want to be clear, as we continue to pursue normalization between Israel and neighboring countries, we remain committed to a two-state solution,” said Thomas-Greenfield. “We firmly believe Israelis and Palestinians deserve equal measures of freedom, dignity and prosperity.”

The Abraham Accords are the epitome of how to turn ideas into tangible reality that serves the citizens of our countries. A pleasure to join my colleague Min Khalifa Shaheen Almarar to take stock of the first year of 🇮🇱🇦🇪 relations. Tks @ajcglobal and Jason Isaacson for hosting pic.twitter.com/BNtQGtnrfo 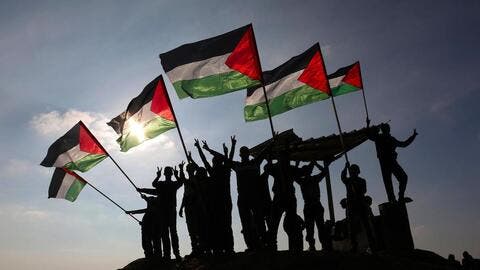 Sudan followed the UAE, Bahrain and Morocco in signing up for the Abraham Accords last year, but the flurry of diplomatic activity in the region subsequently slowed. Many people — including some of the speakers at Monday’s event — have highlighted Saudi Arabia, the Gulf region’s largest and most powerful country, as the most important nation with which Israel must now work to develop ties.

Authorities in the Kingdom have made clear that they support a peace built on the accords, but that any Saudi rapprochement with Israel cannot come at the expense of the Palestinian people.