Published July 4th, 2022 - 05:59 GMT
T-shirt with Arabic writing angered some Turkish online commentators. (Twitter)
Highlights
LC Waikiki is a Turkish brand founded in 1985 and has over 1000 stores in 56 countries.

A T-shirt with Arabic writings has stirred backlash by some Turkish online users, who attacked the manufacturing brand, the Istanbul-based LC Waikiki, and demanded the popular fast-fashion maker respect the "Turkish culture".

Posting screenshots showing the kid's T-shirt with "it's playtime" in Arabic being offered on the Turkish version of LC Waikiki's smartphone apps, some Turkish consumers expressed their dissatisfaction with the move, demanding LC Waikiki to use only the Turkish language for products sold in Turkey.

Translation: "Hello, we at LC Waikiki operate in 56 countries and we offer products suitable for the languages and cultures of those countries. This item was produced for international branches but was put on sale in Turkey due to a system error. Consequently, we removed it from the store."

LC Waikiki's response once again fired back as Arabic-speaking commentators condemned the brand's removal of the shirt in Turkey and considered it an agreement with "racist voices in Turkey".

Online commentators questioned the reason Arabic writings triggered Turkish voices against the brand, but not English or French writings on clothes. 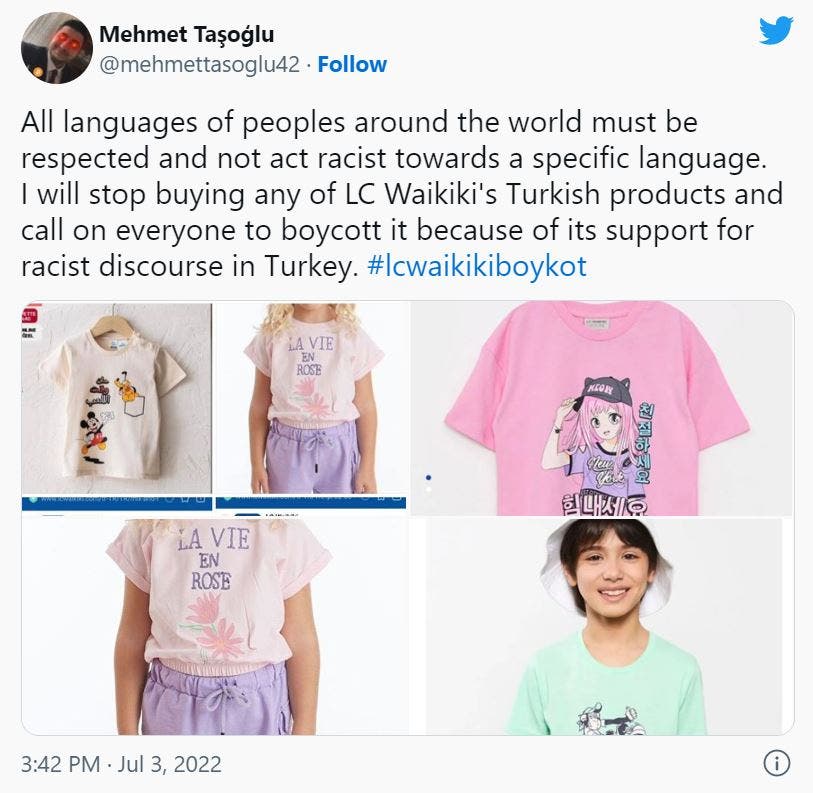 Some people referred to the growing number of Arabs in Turkey, including refugees, students, and others as potential customers for the T-shirt, saying LC Waikiki "should not have removed the item for the store".

According to official figures provided in 2020, nearly 9 million Arabs live in Turkey for a variety of reasons. Moreover, 1.3 million tourists from the Gulf countries flocked to Turkey in 2021.

Traslation: "No problem with English, French, German, or any other language. Your only problem is with Arabic, the language of the Qur'an. Boycott LC WAIKIKI .. Do not accept racism"

I boycott all Turkish #lcwaikiki products and call on all our Arab brothers to boycott them due to their compatibility with the racist speech in Turkey.The company has thousands of products in English and apologized to the racists for showing a kid's T-shirt with 3 Arabic words? pic.twitter.com/LOmXbGHvtU

Using the hashtag #lcwaikiki, many Arab users called for a boycott of LC Waikiki both in Turkey and in Arab countries alike, as a result of the debate.