“Building Mosques is a Waste of Public Money”: Tunisian Professor Under Fire

Tunisian professor, Amin Mahfoudh, who works at the Faculty of Law and Political Sciences at the University of Sousse in Tunisia, has stirred controversy after sharing a Facebook post in which he criticized building mosques referring to them as a waste of public money.

Prof. Mahfoud has written a post which got a lot of attention and criticism at the same time. He began it with a question “Where are we when it comes to sensible work?”. The professor continued mentioning three main points describing the Tunisian law on mosques in general as well as state allocations in the sector. 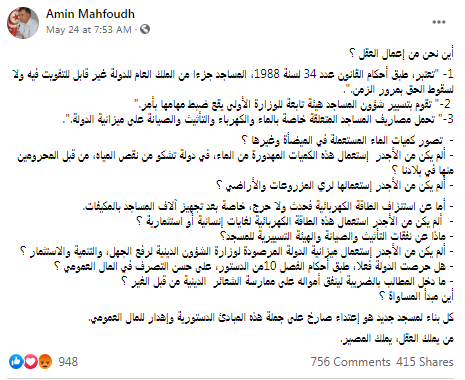 In his third point the Tunisian professor mentioned: "Mosque expenses related to water, electricity, furnishing and maintenance are paid through the state budget."

Then he went on pointing out the amount of wasted water people use while in mosques while the country is already suffering a shortage in water. He also revealed that it would have been much better if the government used that water for trees or agricultural lands.

Amin Mahfoudh, the constitutional law professor, continued to criticize the amount of electricity used at mosques too. He ended his post by writing that building new mosques is a blatant assault on all these constitutional principles and a “waste of public money;” “He who has the mind, has the destiny.”

Translation: “We also must ask ourselves if it is really necessary to have a ministry of religious affairs with a huge budget!!! Amin Mahfoudh: Building mosques is wasting public funds.”

However, not all the comments on the Tunisian professor’s Facebook post were negative, some have added that instead of building mosques, the government can pave the way for investments in order to decrease unemployment rates in the country. While other users replied that reducing the number of mosques shall keep the noise of the speakers away.

Facebook users who were angered by the post said it is better to look after other wasted money such as parallel economy, tax evasion and secondary state expenditures then we can look into wasted money paid on mosques' water and electricity.

Munji Marzouq, an ex-energy minister in Tunisia, slammed Mahfoudh’s negative post as a "sick intellectual absurdity,"saying "what are the noble human goals, if not a better life, in which a person finds his happiness, calm and balance?".

According to the data published by the Ministry of Religious Affairs in December 2015, there were 5,470 mosques in Tunisia. The Great Mosque of Kairouan which is on UNESCO’s list of World Heritage is one of the biggest mosques in North Africa, and is located in Kairouan, Tunisia.